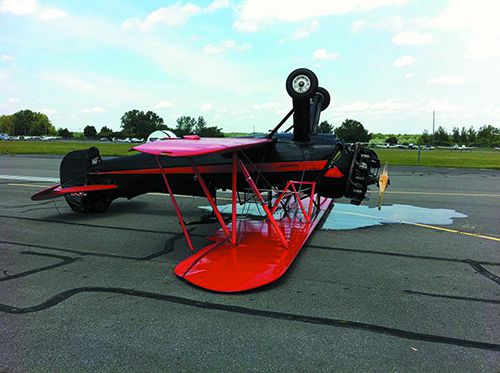 At first glance, flying an airplane built before 1970 isn’t a big deal.  The FAA doesn’t get too excited about it in the regs.  If the airplane of choice has a tailwheel, FAR Part 61.31(i) requires a tailwheel endorsement from a CFI if you don’t already have one.  Otherwise, the regs are silent.

There’s no type rating required (we’re talking about piston-engine airplanes weighing less than 12,500 pounds.) You can legally hop into a World War I era Curtiss JN-4 Jenny and fly it.

If you’ve got a tailwheel endorsement, a huge pot of money,and want to buy and explore flying an antique airplane, you can do so. If  it’s a breezy day, you might want to sell tickets as there’s a good chance that you’re going to provide some entertainment.  It won’t, however, be the sort that is enjoyed by people who treasure aviation’s classics.

Bottom line, the older the airplane, the more likely it is to have systems and/or handling quirks/features that can get a modern pilot in trouble.  In our opinion, a checkout from a CFI with experience in the type of airplane is essential.

Brent Taylr, president of the Antique Airplane Association (www.antiqueairfield.com), spent considerable time talking with us about the process of getting checked out in a vintage airplane.  He repeatedly used the phrase, “Join up with the aircraft”.  He said that a pilot has to approach an antique in the context of the time in which it was designed and built.

For example, while aeronautical engineering was a burgeoning science in the 1920’s, there was a lot that was not known about stability and control, plus, not all of the manufacturers knew about or were applying cutting-edge technology.  Taylor told us that control harmony varied among manufacturers, with Travel Airs and Wacos having a reputation for being pitch-sensitive and having had heavy ailerons.  He told us that the big biplanes of the late 1920’s- and early 1930’s usually had big, powerful rudders while the monplanes were more likely to be directionally unstable or neutrally stable.

We also learned that system design was all over the place in older airplanes – often meaning that such things as fuel systems are not intuitive to a modern pilot.  Brakes seemed to be especially difficult for manufacturers to master – ranging from nearly worthless to a light touch will put you on your back (pictured)

Taylor strongly recommended that a person interested in buying an antique, classic or small warbird take advantage of the knowledge available in the various type clubs and at the Antique Aircraft Association, EAA and AOPA to find pilots, owners, and instructors who have detailed knowledge of the particular type of airplane.  Many of the type clubs have extensive background materials on the airplanes.  That’s especially valuable as there are virtually no Pilot Operating Handbooks (POHs) for airplanes built before 1970.  Most have some form of Owner’s Manual, but the amount – and accuracy- of the information provided varies massively.  Type clubs can provide the missing information and point you to knowledgeable CFIs.

We can’t emphasize a careful checkout too much.  We’ve seen too many old airplanes bent by optimists.

We also were told by tailwheel antique owners that they helped themselves in the checkout process by starting out by getting comfortable in Citabria (for monoplanes) or Stearman (for biplanes) before taking dual in the specific type they were buying, or bought.

For those seeking to own one of the L-Birds – small Pipers, Taylorcrafts, Aeroncas, Stinsons, and Interstates – that went to war, we heard good news.  Most were nearly off-the-shelf production airplanes with minor changes for military needs such as additional windows for spectacular visibility.  Accordingly, a pilot current and comfortable in a Citabria should find little problem checking out in a Taylorcraft L-2.

With a “hardening” insurance market, we were concerned about the availability of insurance for antiques and classics.  We found that there are dedicated insurance programs for the world of those who have an affection for old airplanes.  One of the benefits of membership in the Antique Airplane Association is eligibility for insurance through the Butler-Brown Division of MidwestOne Insurance.  We also found that type clubs and warbird community have connections to insurance brokers and underwriters who have significant experience with specific types of older airplanes and often specialize in writing coverage for them.

The consistent word we got on insurance coverage for someone new to an old airplane was a requirement for a checkout from a CFI who knew the type – usually for a minimum of 10 hours of dual.  In our opinion, that’s completely reasonable.

Buying The Old Ones: Homework Mandatory