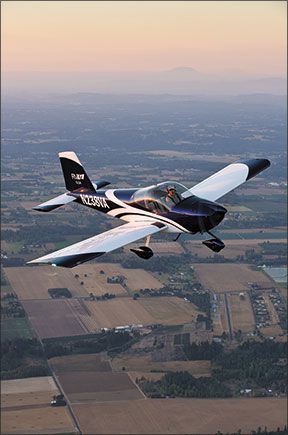 The way we see it, if there’s an aircraft manufacturer that could have an advantage in the LSA market, it’s Van’s Aircraft. For decades, Van’s has dominated the kit market with the proven and respected RV line. With over 8000 RV aircraft flying, homebuilt RVs have an earned reputation for excellent handling, decent ergonomics and plenty of fun factor.

Of course, before you can put your own new RV in the air, you or someone else needs to build it. But the factory-built RV-12 LSA changes that and can be purchased ready to fly.

We flew the RV-12 at the 2014 U.S. Sport Aviation Expo in Sebring, Florida, where—in an otherwise ho-hum LSA market—it attracted a healthy amount of interest.

Kit or fly-away
Buyers aren’t limited to factory-built RV-12s. The model is available in a kit and is still eligible to be licensed in the E-LSA (experimental Light Sport) category. There are some restrictions. The E-LSA category does not permit builders to alter the design, which means no unapproved engines, propellers or avionics are permitted. Van’s said the RV-12 is eligible for registration in the EAB category (experimental amateur built), but cautioned that making changes to the original design of the kit will greatly increase the complexity and build time.
On the other hand, there’s no 51 percent build rule, which means anyone can assist in the build process. Van’s includes everything you’ll need in the complete kit (or subkits). The only thing you won’t get is fluids and paint.

But for those without the time (800-1000 hours, on average) or the skill for building one, the airplane can be delivered completely finished. This includes everything from custom paint and advanced avionics to a tow bar that cleverly serves double duty as a gust lock.

Got trailer?
If you do, the RV-12 was designed to be loaded on one. That’s because the wings can be removed to make the airplane easier to transport and to store at home or in tight hangars.

Wing removal and installation requires two people, one to hold the wing at the tip end (there are hand-holds molded into the tips)and another to handle the stub end. We didn’t try it, but Van’s says that two people can have the wings off in less than five minutes. To remove the wing, you withdraw the fuselage pins that release the wing spar and simply pull the wing off the attachment point, starting with the right wing first. Installation is accomplished in reverse order. All other connections are automatic.

If you botch the spar pin installation, there’s a fail-safe ignition interlock relay and warning annunciator that monitors the spar pin position using micro switches. Unless overridden with the panel switch that’s mounted next to the ignition switch, the engine won’t start with incorrectly installed spar pins.

You won’t need a large trailer to move the RV-12. The all-metal airplane has a 740-pound empty weight and an LSA-compliant 1320-pound gross weight. That low empty weight means the RV-12 can carry two 210-pound occupants, full fuel and 50 pounds of baggage.

On the outside, the airplane measures just shy of 20 feet from prop to tail and when the wings are attached, spans just shy of 27 feet.

The RV-12 carries 20 gallons of fuel (100LL or unleaded) for feeding the Rotax 912ULS engine. That doesn’t seem like a lot, but the airplane has a range that can exceed 600 miles when you pull the Rotax back to 5000 RPM (at 7500 feet). At 5500 RPM, expect roughly 550 miles. Despite a miserly 5 GPH and relatively comfortable seating, that’s longer than we’d like to sit in the aircraft in a single leg.

Performance
We think the newer fuel-injected Rotax 912i-series engine can step the airplane up another level, but that means an increase in price, of course. Still, the carbureted 100 HP Rotax 912ULS has proven reliability, a 2000-hour TBO and pins the aircraft with respectable performance numbers.

At the 1320-pound gross weight, the published sea-level takeoff distance is 750 feet, followed by a 900 FPM rate of climb. On our flight, we saw slightly better performance; with half tanks, two occupants and a temperature of 60 degrees­, a 1000 FPM max climb wasn’t a problem.

Vx or best climb angle is 60 knots, which creates a pretty steep deck angle. Once the wing flaps are up, accelerating to 75 knots (which is Vy) creates a more comfortable view over the nose, while still achieving a respectable rate of climb. We found the airplane was easy to keep coordinated in the climb, requiring only small amounts of right rudder input.

The RV-12 uses a Sensenich ground-adjustable composite propeller. Coupled with the smooth-running Rotax, it makes for a comfortable cabin environment during climb and cruise power settings. Still, the overall noise level in the cabin was higher than expected, but to be fair, we wore a passive headset.

In level cruise flight, the airplane is said to approach the top of the LSA speed limitation. Chris Theylan, a Van’s test pilot, told us he regularly sees speeds in the 118-knot range. With a power setting of 5400 RPM (4.5 GPH), we saw 111 knots at 3000 feet. The published top speed is 135 MPH, or 118 knots. We also saw the handling characteristics that pilots have grown to expect from an RV, despite a design that differs from previous models in the RV line.

Initially, Van’s didn’t expect the lightweight, flaperon and full stabilator-configured RV-12 to fly exactly like its heavier and faster aircraft. A slower airframe is bound to have different flying qualities, so Van’s simply set out to achieve a light, responsive control feel, given the LSA weight restrictions it had to work with.

As Van’s founder Dick VanGrunsven stated early in the project, “We feel that the aircraft flies much more like an RV than it does a Cessna. While this may offend some people, it will make others happy.”

In our view, the RV-12 should appeal to a wide variety of pilots. High- time pilots might appreciate the aircraft’s crisp and responsive handling and low-time pilots should find the aircraft to be forgiving and easy to fly.

Forgiving means no bad habits and we couldn’t find any.

If we had a nit, which is more of an ergonomic preference, it might be the design of the panel-mounted electric trim switch. It could be more convenient if it were mounted directly on the control stick. Still, we doubt most pilots would complain, since it’s positioned almost directly above the throttle control, making it easy to finger while a hand is on the throttle. The aircraft doesn’t need a lot of trimming. We found it easy to trim accurately during level-offs and after major changes in power.

The RV-12 makes it easy for demo pilots to impress perspective buyers—especially low-time pilots that are used to heavier aircraft. An easy demonstration is to have the pilot roll the airplane into a 45-degree bank angle and then let go of the controls. There’s no roll off or large changes in pitch. It’s the kind of airplane that stays where you point it.

Stall speed in the clean configuration and at gross weight is 45 knots. With full flaps, it’s 41 knots. In all configurations, we noted a buffet occurring well before the stall. At 1050 pounds, a full-flap stall is a published 37 knots. There was a slight amount of right wing drop during power-on stalls (it was a gusty day when we flew the aircraft), but recovery was quick and easy by getting the nose down and neutralizing the controls. Aerobatics and intentional spins are not approved.
cabin and avionics

On the inside, the cabin measures 43 inches wide. For comparison, the high-wing designed Flight Design CTLS has a wider 49-inch cabin. Larger pilots might find the RV easier to board.

You mount the RV-12 from the inboard leading edge of the wing and once inside, step down onto a flat floor. No stepping on the seats, which are covered in basic vinyl and fabric. There’s ample storage space behind the seats and we found that the small bags loaded in were easy to access from the outside of the aircraft and while seated inside.

The standard avionics package consists of the Dynon Skyview EFIS suite. It’s a single-screen system with integral transponder, GPS, synthetic vision, moving map display, plus electronic engine instrumentation.
The aircraft we photographed had Garmin’s discontinued SL40 communications radio, but that’s recently been replaced with Garmin’s updated GTR200 radio. It sits directly above the fuse panel in the center of the panel. While the fuses seem basic compared to pullable circuit breakers, the larger fuses illuminate when blown, making it easy to identify.

For avionics options, there’s an available ADS-B system that displays weather and traffic on the Dynon display. It’s a $1600 option—reasonable, in our view—given the capabilities. There’s also a two-axis autopilot that’s controlled directly from the Skyview display. It’s a $2400 option and includes heading command and GPS tracking. The Skyview also has on-screen electronic charting, including approach plates, although the RV-12 is approved for VFR only. The instrument panel of the RV-12 is basic and well laid out, however we can do without the carbon-fiber overlay that was on the demonstrator. While it gives the panel a high-tech appearance, it created sizable amounts of glare when splashed with bright Florida sun.

The retractable sunshade, a $250 option, fits on the top of the large bubble canopy and seems to be a gotta-have option, in our view. Still, the canopy affords awesome visibility outside of the aircraft. It’s a quality fit, too. Absent were the squeaks and rattles that plague some other canopy designs. Some of this is thanks to the smooth-running Rotax, but it also reflects on the RV-12’s quality fit and finish.

The factory-built RV-12 has a base price of $115,00. With popular options, that price can flirt with $125,000. For instance, options include three-color premium paint package with pinstripe highlighting. It comes at an $1800 premium. Color-matched wheel fairings are an additional $2800. Van’s offers a fully equipped version that includes the premium paint, ADS-B system, autopilot, lighting package, plus the wheel fairings for $123,000.

One thing the RV-12 doesn’t have is a whole-airplane parachute system. For some buyers, this would make the RV-12 even more appealing than it is now, if not without a weight penalty and price increase.

Based on price, performance, fit, finish and Van’s long-standing reputation for excellent product support, we think the RV-12 represents one of the better deals in the current LSA market.