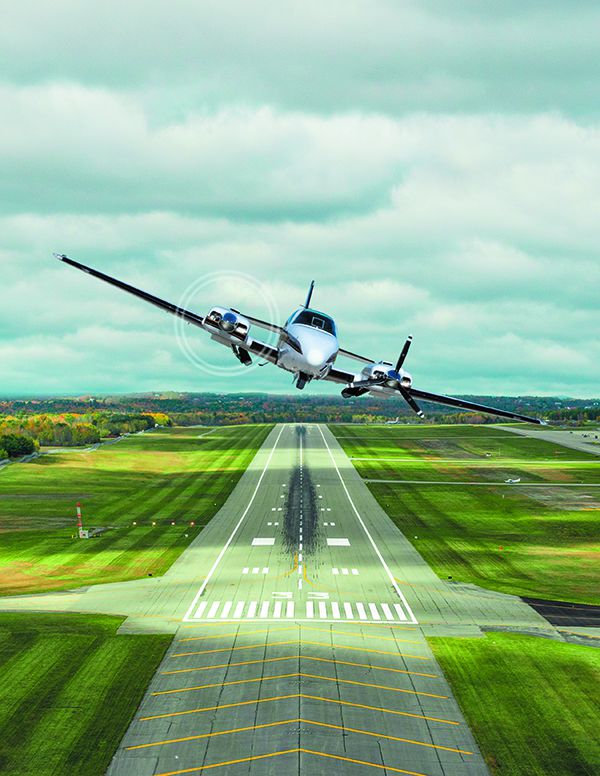 Multi-engine airplanes offer more speed, more payload, more sophistication, and to many, a perceived increase in safety. Face it: In a single, if you lose an engine your options are limited to a forced landing. In a piston twin, that second engine typically won’t give you much (or any) climb and might not even be enough to maintain altitude. But it’ll certainly extend your capabilities and open up more opportunities for a safe on-airport landing—if your skills are sharp enough.

Garmin’s Smart Rudder Bias (SRB), which is built into the GFC 600 autopilot for limited applications, is intended to backstop a skill you should have learned in the first hour of multi-engine training. I recently tried it out in Garmin’s Baron 58 with Jessica Koss at the company’s flight ops HQ in Olathe, Kansas.

An engine failure in a multi-engine airplane with the engines mounted on the wings (compared to center-line thrust like Cessna’s 337) results in significant yaw, roll and sideslip that begin with the asymmetric thrust. At lower speeds, below the minimum controllable airspeed (VMC), flight controls cannot fully overcome that yaw, roll and sideslip. The result is what’s called a VMC rollover, where the aircraft rolls into the dead engine, usually to inverted, descends rapidly and, if not corrected, ultimately produces a smoking crater on impact.

The good news is that the asymmetric thrust, if promptly and properly addressed, can be managed. Indeed, even a VMC rollover itself remains recoverable with the right control inputs. Obviously, though, it’s safest to just manage things before reaching VMC and the rollover. Enter Garmin’s Smart Rudder Bias.

During multi-engine training much practice is given to single-engine operations and avoiding VMC. The proper response to an engine failure is to lower the nose to maintain airspeed, apply rudder to correct the yaw from asymmetric thrust and  apply a few degrees of roll into the good engine. In a perfect world, all of these inputs should be applied immediately and simultaneously, resulting in the best possible performance with one engine inoperative.

But, in real life, the startle factor from a sudden and clearly unexpected engine failure can add seconds to the time needed just to recognize the situation, much less properly respond to it. At low speeds, such as takeoff and initial climb, that time is critical.

Garmin’s Smart Rudder Bias is enabled on takeoff as the aircraft reaches VMC. It remains active throughout the flight and is designed to quickly recognize the loss of power on one engine and to immediately apply corrective rudder to overcome some of the yaw. (More on “some” a bit later.) Since most of the problems initially result from that yaw, this corrective rudder can become critical in saving the day.

But rudder is just one of the needed corrective actions. Once SRB recognizes the engine failure, it tightens the parameters on acceptable airspeed and roll. In this way, if airspeed is getting dangerously close to VMC, the system nudges the nose lower. It does the same thing to correct excessive roll, with the result being an immediate and significant reduction in the possibility of a VMC rollover.

Imagine that you’re in a twin, accelerating from rotation and climbing, and passing a few hundred feet AGL you enter the clouds. Shortly after, your left engine comes apart. At full power and low airspeed, the airplane will immediately and almost violently yaw to the left. You need immediate right rudder to counteract that yaw. But relying solely on the instruments, without the visual cues of the world swinging sideways out the windshield, it’s not uncommon for even experienced pilots to apply the wrong rudder, increasing the developing yaw from the engine failure. This is often fatal.

In this worst-case scenario, the pilot has shifted attention to the instruments. In addition to getting the pilot started with correct application of rudder, the system prominently announces the failed engine on the EFIS, helping the pilot properly recognize and react to the failure.

At this point you might be wondering why the pilot needs to react at all if the system has already reacted. SRB is an aid only; it does not do everything that needs to be done. The initial application of corrective rudder is not the full amount required, but gets you started in the right direction. The pilot must apply yet more rudder pressure to fully counteract the yaw.

Then, the pilot must also manage airspeed, presumably lowering the nose. Yes, the system will help you correct the pitch if the airspeed gets too low. But, that’s just a safety backup. It’s still the pilot’s job to prevent that loss of airspeed in the first place.

What about that roll into the good engine? That’s the pilot’s job. That few degrees of roll maximizes the controllability and performance of the aircraft with that asymmetric thrust, the need for which increases as the airspeed slows. While that roll into the good engine is best practice at any airspeed, it only becomes critical as airspeed approaches VMC. Since the other inputs from SRB help the pilot avoid VMC in the first place, establishing that roll is left to the pilot.

Once the pilot is fully in the loop and has stabilized the aircraft, SRB can be disengaged, but the GFC 600 autopilot’s ESP (Envelope Stability Protection) functions will remain.

So far, we’ve talked only about what SRB does to help a pilot manage an engine failure in a twin. But, what pieces do all that?

Smart Rudder Bias is software that works cooperatively between the G500/G600 TXi EFIS with the engine indication system (EIS) and the GFC 600 autopilot with yaw damper. The engine failure is recognized using data available within the EIS that indicate more than a 30 percent power differential with accompanying yaw. Once recognized, the failure is announced on the EFIS, and the autopilot applies corrective rudder.

The GFC 600 autopilot includes a system Garmin calls Electronic Stability and Protection, ESP. This system is always operating (it can be disabled) and monitors pitch, roll and airspeed parameters. When activated, SRB tightens the parameters and guards more tightly against low airspeed. Once you have a G500/600 TXi with EIS and a GFC 600 with yaw damper, you have all the components necessary for SRB. However, since SRB is a new feature that’s been added to the systems, it requires additional certifications. In other words, although you might have a twin with the requisite avionics, you’ll have to wait until SRB has been certified in your specific airframe. The good news, though, is that once certified, Garmin does not charge extra for SRB or the software updates needed to make it operational—although your installer might charge labor to apply those updates.

As conceptually impressive as the system is, the actual inflight experience was rather “ho-hum.” But, that’s a good thing. Let me explain.

When you have two perfectly good engines in a twin and you practice engine-out situations, you never—well, shouldn’t—just suddenly cut the power on one engine. That’s bad for the engine and can take you closer to the edge of safety than you would normally like to get on purpose. So, being a prudent pilot, Jessica told me that our demonstration would take place at altitude under quite controlled circumstances. So, once at altitude she began a power reduction on one engine. As the power differential reached the SRB threshold, the developing yaw was (mostly) corrected. Bringing the power further back, corrective rudder continued until it reached the maximum, but still less than what was ultimately required. Since our power reduction was gradual, the system’s reaction was also gradual. Bottom line, though, is that it works as advertised.

I tried it, and we rolled power back on one engine and then the other in subsequent demonstrations. In each case, the result was a comfortable adjustment by the system to the asymmetric thrust. No drama here. I noted to myself that the most impressive part of the demo was the lack of excitement. I’ve long felt that an unexciting flight is the safest kind.

I flew my own GFC 600-equipped Cessna 340 to the demo with my wife, also a pilot, but not multi-engine rated. I described to her how the system worked and what it did. She mulled that for the rest of the trip, asking various questions. Later in our trip at another event, we attended an unrelated Garmin presentation that included SRB. At the conclusion, my wife turned to me and said, “I’ve been thinking about all this and the presentation brought it all together for me. We need that.” Well, Dear, if you insist.