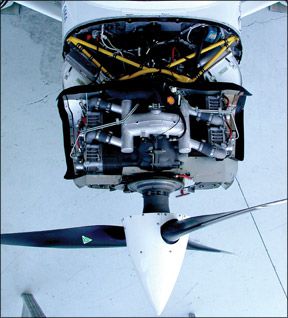 When Continental announced in May that it planned to develop a diesel engine for the light aircraft market, it was boldly going where many have gone before. Unfortunately, the many have had their diesel entries ground to a bloody pulp by a fickle market more interested in speed than economy and unconvinced that diesels supposed longevity is worth the higher purchase price.

A historical fact: Depending on how you define commercial success, there has never been a commercially successful diesel engine for aircraft. The Thielert/Centurion

line launched in 2005 comes closest, but the company went belly-up and although its building engines again, it remains insolvent.

Our idea of success is defined by having enough engines in the market to represent a sustainable economic bloc and/or a company thats still viable. In that regard, Pratt & Whitneys round engines might qualify as a continuing success while Centurion remains in the iffy column.

So what is it about diesels? They seem like such a terrific idea in theory. But in practice, theyve consistently failed to deliver. Theyre usually heavier than gas engines, have poorer power density and have proven substantially more expensive to build. That much hasnt changed since Packard tried the Dr-980 radial diesel in 1928. So what possible market trend could rewrite the equation? Only one: fuel availability.

History has a way of repeating itself and that certainly seems to be true in the diesel market. The first serious effort in aircraft diesel was launched by Packard in 1928 in the form of the Dr-980, a nine-cylinder radial intended to compete with the IO-550 of the day, Wrights 225-HP Whirlwind J-5. Although the Whirlwind gained indelible fame for reliability by powering Lindberghs flight across the Atlantic, it had terrible fuel specifics. At 0.6 pounds of fuel per horsepower hour, its thirst was closer to a turbine than a modern, relatively efficient gasoline engine. Designers using the J-5 had to find a lot of room for fuel and even then, gasoline-powered aircraft were range challenged. Further, in 1928, just as now, the world was worried about running out of oil, since discoveries of new major fields-especially the Black Giant in East Texas-were still in the future.

Even by modern standards, the Dr-980 was an impressive effort. According to Robert Meyers The First Airplane Diesel, the Dr-980 matched the Whirlwind on weight, power density and overall size, something that no modern diesel can claim. It crushed the J-5 on efficiency, running at 0.40 BSFC, a 50 percent improvement in fuel economy. No modern diesel can claim that kind of improvement over the gasoline competition, either.

Nor was the Dr-980 some back-hangar project. Packard invested the contemporary equivalent of $8 million in a plant designed to build 500 engines a year. Yet like many other diesels to follow, the Dr-980 failed. By 1930, it was a soon-to-be-forgotten historical footnote. As is usually the case in business plans, the Dr-980 failed for multiple reasons. To lighten it, Packard nibbled structure to the minimum and had trouble keeping the cylinders on. Seventy-five years later, Thielert repeated the mistake, although differently in detail.

The Dr-980 had a four-cycle design with a single valve which resulted in a smoky exhaust that filled the cabin with objectionable fumes and ruined clothing. But what finally killed the Dr-980, according to Meyers, was the development of 87-octane fuel and later even higher octanes that made possible gasoline engines with overall power and power density that diesel couldnt match.

Not that this kept companies from trying, including Junkers in Germany. The Jumo 205 is often cited as a highly successful design, but thats debatable. The 205 was a creative six-cylinder, 12-piston, two-cycle design with two crankshafts located where the valve covers would normally be on a typical horizontally opposed aircraft engine. Although the 205 had exceptional power density-1.5 pounds per horsepower-even for a two-cycle, it was complex to build and maintain. (Think about the gearing to join two crankshafts to a single output.)

The Jumo 205 found commercial and military application before and during World War II, but its unclear how many were built. One source suggests more than 900. Sustained by the artificial market of a war economy, the 205 met the same fate as the Packard. It was done in by gasoline engines-and turbines-with performance so superior as to outweigh diesels fuel economy advantages.

Advance the clock 80 years and you might assume modern technology would have so improved aircraft diesel engines that they would capture the market in a walk. But that hasnt happened. The test case is the Thielert Centurion that Diamond chose for its DA42 twin. The airplane got a warm market reception, sold well-especially outside the U.S.-and was economical and easy to fly. But just as with the Packard, the engines were expensive to buy and they developed significant maintenance issues that eventually caused Diamond to go its own way and develop the automotive-based Austro AE300. Thielerts problems were so significant that it eventually went bankrupt and has been reconstituted as Centurion. Only recently has Centurion announced life extension programs that reduce the onerous routine maintenance on clutches and gearboxes, but even at that, Centurions diesels dont match typical gasoline engine TBOs and the Centurion is still a replacement/exchange engine that cant be overhauled in the field.

Centurion engines, although economical, lack the power density of the best gasoline engines. The market badly needs a high-performance diesel, which Centurion has in its 4.0. But at 600 pounds, its 150 pounds heavier, larger and more complex than the gasoline competition.

In its SR305, SMA has a strong diesel performer, with good fuel specifics, excellent power density and a direct drive design that eliminates the complexity of a gearbox. Our surveys of operators of SMA-powered aircraft-conversions only-reveal satisfied customers who believe the engine has merit. Continental thinks the same thing, since it acquired SMAs technology as a seed for its own aggressive heavy fuel engine line.

its the Fuel, Stupid

The bet here seems to be that even if diesels continue to have power density,

power output and short TBO issues, the impending demise of 100-octane gasoline-and maybe just the perception of its demise-has tipped the balance permanently toward heavy fuel engines. As the graphic on page 5 shows, Jet A is the world fuel of the future; avgas a boutique fuel suffering a long decline. Globalization will hasten this because increasingly, the world aircraft market will eclipse North America as the dominant driver.

“Sixty percent of the worlds small piston airplanes are on the U.S. registry,” says Andre Teissier-duCros, an engineer who edits the DieselAir Newsletter. “It was 70 percent in the 1970s. It will be down to 50 percent in 2040 and the number of U.S. light aircraft will be stagnant or perhaps even dropping by some 1 percent a year between now and 2040,” he adds. He rightly notes that avgas has and is vanishing outside the U.S. and is even threatened in the U.S. This, in part, is why Continental decided to buy diesel technology it could rapidly develop rather than invent its own. It wanted a nimble response for the U.S. market but also to remain a player in offshore sales growth, which is almost certain to demand heavy fuel engines.

We know that just about every aircraft manufacturer has looked or is looking at diesel powerplants. Alan Klapmeier told us that Cirrus took a run at both the SMA engine and Thielerts 4.0. The former had cold weather start issues, he said, while the 4.0 was just too heavy. Cessna announced a Thielert-powered 172 in 2007, but drew back just as Thielert was going under, saving itself untold grief, were sure.

Cessnas Bob Stangarone told us the company is still examining diesel, but he declined to say which ones.

Among the diesel cognoscente, its accepted that the threatened extinction of avgas is market force enough to sustain heavy fuel engines, despite their shortcomings. But can the shortcomings be fixed?

Luc Pelon of SMA thinks so. Part of that will be educating both buyers and aircraft manufacturers of diesel advantages, including that they arent always heavier than gas engines and that they dont smoke and vibrate. In other words, he thinks diesel shortcomings are more perceived than real.

Thus far, among modern diesels, the SMA SR305 is the only engine with power density similar to gasoline engines. Thus far, it doesnt appear to have the short service cycle and maintenance headaches of the Thielert, but only about 100 SR305s are flying, compared to more than 1000 Thielert/Centurion models, including many in military UAVs. Pelon concedes that the cost of converting existing aircraft to diesel is too expensive.

“If you do as many engines as Lycoming and Continental have in the past, then you are going to get your return on investment for manufacturing castings and forgings and so forth,” says Pelon. But you cant change the laws of physics; compression ignition will always require higher compression ratios and cylinder pressures and that translates to more structure. Minimizing that structure to save weight requires careful application of technology and that, in turn, requires more investment. Pelon says SMAs market surveys suggest that buyers will opt for a diesel thats up to 15 percent higher in cost than an equivalent gasoline engine, so thats the market target. Reliability and durability are assumed-say at least a 2000-hour TBO-but the crunch comes because buyers are expected to take that on faith. It hasnt been demonstrated yet.

And thats why Continentals entry into the market is so significant. Its a major engine company with the clout to sell diesel to an OEM or two. Cirrus seems a likely candidate. If Andre Tiessier-duCross numbers are close to reality, diesel will ramp up slowly and will still rely to some extent on North American sales.

To benefit from the economy of scale that Pelon sees as necessary to drive down purchase costs, some magic volume number is a must, although no one knows what that is. We agree with the diesel optimists about the inevitably of the trend lines that point to aircraft diesel being sustainable, but we also note that it hasnt happened yet. Sustainable means the company making the engines doesnt go bankrupt and that it can demonstrate sales in the hundreds and thousands, not in the dozens.