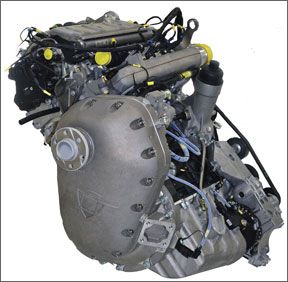 Back in the day when aeronautical engineers actually wore ties-skinny black ones-and ran calcs on wooden slide rules, it was accepted wisdom that to develop a new airframe and fit it with a new, untried engine was to court disaster. Diamond Aircraft proved the point in the digital age with its DA42 Twin Star.

The Twin Star proved a terrific airframe and a strong seller. But the four-cylinder Thielert diesel engine Diamond selected as the powerplant turned out to be just the disaster the guys in the skinny ties worried about. Owners complained of high maintenance incidence, long downtimes and last spring, Thielert went bankrupt, beaching hundreds of owners who needed parts and engines. Moreover, during its initial recovery, Thielert quoted parts and replacement engine prices that raised hourly engine reserves to $100 or more-per engine, without fuel.

Although Thielert seems to be getting back on its feet, Diamond went its own way and established the Austro Engine Company in Wiener Neustadt, Austria, next door to Diamonds factory. After what must be one of the fastest engine development cycles in recent history, Austro announced in late January that it has EASA certification for its 168-HP AE 300 diesel engine and production is already underway. (AE 300 is the marketing nomenclature; the type certificate calls the engine the E4.)

The good news for Twin Star owners stranded by Thielerts cratering is that in the Austro, they now have a choice in replacement engines. The new engine delivers more power and is more fuel efficient, according to Diamond. The bad news is that it will be a number of months before retrofits are available for Twin Stars and the single-engine DA40 TDI. Diamonds Peter Maurer told us in February that the factory has the capacity to produce replacement engines for existing DA42s or soon will. But the initial production will go to new DA42 NG models (next generation) not to retrofits because Diamond wont have approvals for retrofits until later in the year. Meanwhile, certification work on the Lycoming-powered version of the DA42 is nearly complete, so owners may soon have the option of three engine choices.

Although the Austro is identical in concept and similar in size to the Thielert 1.7 and 2.0 Centurions used in the original DA42, its not an afternoon bolt-up job to convert a Thielert airplane to an Austro airplane. Significant modifications are required, including a new cowl, engine mount, wiring harness, landing gear mods (to accommodate higher engine weight) and software changes in the Garmin G1000.

As was the Thielert, Austros AE 300 is based on the 1.7/2.0 litre direct-injection diesel engine Mercedes-Benz developed for its popular A-class entry level sedan. Originally introduced in 1997, some 1.6 million have been sold worldwide, a volume that actually bodes well for aviation use because it assures an ample supply chain of parts.

While Thielert used the 1.7 (later upgraded to the 2.0) as its basis for the Centurion aerodiesel, it made significant changes to the engine, the largest of which may have been recasting the block in aluminum to save weight over MBs cast iron block. Thielert also made changes to the injection system and modified the engines electronic controls for aircraft use. As is the custom with all engines adapted from the automobile market, Thielert reduced the crankshaft RPM from a maximum of 3800 to a more propeller-friendly 2300 RPM with a 1:1.69 reduction setup. Thielert did this with a front-mounted gearbox assembly that may have proven to be the engines initial undoing, mechanically and economically.

To assure reliability, Thielert required the gearboxes to be removed and inspected every 300 hours, with the promise that inspection intervals would relax with more operational experience. But thats only recently happened and then after the companys bankruptcy. The Thielert engines also use an automotive-type clutch

with damping springs to isolate the diesels harsh power pulses from the gearbox and prop. Even at that, because of torque pulses, the Thielert cant swing a metal prop, due to rapid tip fatigue.

Thielerts entry-to-service plan also called for periodic proactive replacement of other key components, including the high-pressure fuel pump and alternators and its initial TBR-time between replacement-was 1000 hours. Many owners complained to us that even that was a reach.

Now come Austro and Diamond with Diesel 2.0-and we dont mean litres. The Austro is based on the same A-class engine Thielert used, but Austros execution is significantly different. Rather than recasting the block in aluminum, Austro is sticking with the cast iron straight from MB.

And that means a weight penalty of about 113 pounds per engine-a heavy hit against the DA42s payload. To accommodate it, Diamond has beefed up the landing gear and will increase the NG Twin Stars gross weight to 4180 pounds from 3935 pounds. The weight increase will also apply to Twin Stars retrofitted with the Austro engine.

Retaining the cast iron block strikes us as a compromise solution. It simplifies manufacturing and supply chain issues which could make or break this new engine. Theoretically, it also makes the Austro more robust to accommodate its higher power output-168 HP versus the 135 HP delivered by the Thielert engines.

Although owners did complain about head and oil nozzle cracking in the Thielert engines, were not aware of any fundamental issues related to the aluminum block, but its worth noting that Thielert didnt consider the engine overhaulable and proposed to replace it instead. The new Austro will retain the same valve train-dual overhead cams, four valves per cylinder-and the aluminum heads used in the Thielert engines.

Another significant change is the gearbox. The reduction ratio is the same, but

where Thielert used an automotive clutch to isolate torsional pulses, the Austro has a harmonic torsional vibration damper. It also has heavier gears and bearings.

The idea, says Diamonds Maurer, is get the engine in service with a gearbox that goes the distance without needing midstream inspection and replacement. As another departure from the Thielert strategy, the Austro is intended to be overhauled, not replaced. Initial TBO hasnt been set yet, but its likely to be around 1000 hours, with a life extension program pushing that to at least 2000 hours.

The Austro also has some other detail changes of note. The turbocharger is mounted high on the engine, eliminating the need for an oil scavenge pump-the oil drains by gravity back into the sump. Fuel injection rail pressure is 20 percent higher, allowing for more precise injection pulse-width control and, so Diamond claims, improved fuel economy.

Since we havent flown the Austro-equipped DA42, we cant confirm Diamonds performance claims. We provide them here at face value. The engine is nominally delivered with a minimum of 168 metric takeoff horsepower or 166 SAE horsepower at 2300 prop RPM. Maurer told us that Diamonds initial testing in the Austro DA42 yielded a true airspeed of 185 knots at 9.6 GPH per side (19.2 GPH total) and 100 percent power. That compares to a maximum of about 165 knots and 6.5 GPH per side or 13 GPH total with the Thielert engines. At a more realistic cruise of say, 80 percent power, Diamond reports that the Austro DA42 delivers about 172 knots on 7.3 GPH per side or 14.6 GPH total.

of these two engines. On the automotive side, Mercedes-Benz has made impressive strides in eking more power and better economy out of the base 2-litre engine. This has been borne out in the automotive press. Diesel technology continues to advance rapidly, primarily with improved pulse-injection control through more sophisticated electronic controls. We see no reason why Austro wont be the beneficiary of MBs multimillion Euro R&D efforts.

Our back-of-the-envelope calculation-based on numbers provided by Diamond, not our own observations-indicate that the Austro is running at a brake specific fuel consumption of about .36 pounds per horsepower hour. Our previous trials of the Thielert engines revealed a BSFC of about .38, which is just a bit better than the most efficient avgas engines running lean of peak can do. If this estimate is accurate, its consistent with gains reported in the automotive field. Well know more in a few months.

Although some of the diesels appeal accrues from fuel economy, the larger issue is fuel availability as 100LL appears increasingly threatened. But the real acid test for Diamond and Austro is economics and service reliability. There are significant benefits to coattailing the automotive supply chain, not the least of which is that the huge volume reduces prices and improves quality control, something that has eluded traditional aircraft engine manufacturers.

On the other hand, what if Mercedes-Benz abandons the 2.0 litre base engine entirely when it invents the next big thing? Maurer says Austro is cognizant of this and has in place supply agreements to meet its needs well into the future. Austro isnt, by the way, buying short blocks and then dressing them for aviation. Its buying parts from Mercedes and building engines from the crankshaft out.

The tricky part for Austro is staying far enough ahead of MBs auto-driven development cycle to benefit from the technology without being cut off by a major footprint change in the engine. Maurer says if necessary, Austro will stockpile components to keep the engine alive.

The second tricky part (besides developing a service network) is delivering this new engine at an affordable price that assures practical, long-term survival. Thielerts initial business plan clearly didnt perform on this requirement. Now its Austros turn. Two years from now, well have a better idea about how-or even if-they can pull it off.