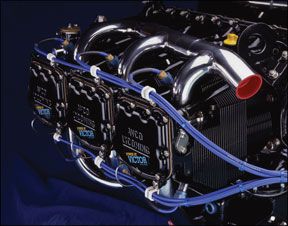 There is no shortage of aircraft engine overhaul purveyors out there appealing to a number of aircraft owners who are interested in engines with something special-something that says, “My engine is better than the run-of-the-mill overhaul.” Extras may mean outside flash, special parts, alleged attention to detail or tighter measurement tolerances.

Plain, factory engines regularly make TBO, and problems en route to TBO are not often those that a custom engine build would address. Those are long times between overhauls and low utilization that cause corrosion, a cracked cylinder from a metal defect, or improper leaning technique leading to burned valves.

smoothness or all three. In our view, the validity of these claims depends on the integrity of the shop, the size of your pocketbook and the seat-of-your-pants feel.

What You Really Get

Is a custom engine safer than factory standard? Probably not, but it could be more reliable than your old engine was in its prime if you elect to use redesigned, new parts.

Will it have more power? Probably some, but not significantly more than a standard factory engine. If youre swapping for a more powerful engine, such as the IO-550 for an IO-520, that will make a noticeable difference.

Will it be smoother? It probably will be as long as the enhancements are toward that design. If you push for a maximum power gain in an experimental at some race-oriented shops, its likely the engine will run less smoothly than the standard, factory engine.

Careful flow-matching of cylinders is helpful for smoothness as well as real horsepower gains, but not a whole lot of shops have accurate flow benches and the skilled technicians to use them properly. Popular custom engine candidates such as the TCM IO-520 can be made to run smoother and a bit stronger just by simply doing lifter bleed-down checks and matching parts. Read the specifications carefully to see exactly what the shop will do in pursuit of that special engine.

Reliability is a wild card since we know of no independently verified empirical data on custom or what we call boutique engines. Even if there were, the way the engine is operated and how long its in service are more influential on the engine TBO life-as is the type of engine.

The extra-special measurement claim is more ethereal. We only have the overhaulers word that they do it and not much statistical data to show that it helps. Chrome and special paint color is purely an ego boost, in our view. We dont buy that some of the special external treatments improve cooling.

The Quest for Power

In our view, hopped-up engines requiring an STC often are rarely worth the speed gains they achieve for the average flyer. They often lead to unanticipated issues, like lowered resale value and reduced range. We watched a 350-HP, Lycoming-powered Bonanza languish in

Trade-a-Plane for months as the price kept falling and falling.

There are exceptions. If your engine is down for overhaul, there are some STCs that make sense, such as making a 150-HP Cherokee 140 into a 160-HP one with a minor piston change. The IO-550 for IO-520 swap is also popular but does require an STC. Its costly because a prop swap is involved, but if you can afford it, we recommend it as a step-up with a better engine.

Extra power claims without an STC in rebuilt engines have a catch: If the total result of tweaks exceeds 10 percent of the manufacturer-rated power specifications, or if it constitutes using other than manufacturer-approved parts or PMA equivalents (specified in the parts manual and amended by any new factory bulletins), then an STC is required for certified aircraft. An STC is not something an individual would want to tackle, bureaucratically or financially. Horsepower gains of less than 10 percent wont give dramatic speed increases. Improved climb might be noticed. Of course, youll pay for any extra power with extra fuel use. (Slightly elevated fuel use is normal with any rebuild, but should improve to near book values as the engine gets well broken in.)

The common term “blueprinting” is largely illusory in that shops are not privy to factory drawings and few shops are set up to do these “ultra” measurements. Its also not FAA-legal to alter the engine for certified aircraft from the factory configuration such as by porting and polishing. Removing casting flash is fine. No reputable rebuild shop would violate this.

Of course if you have an experimental airplane the world is your engine oyster. You can modify an engine and double the horsepower-and probably halve the TBO. Even Lycoming has a new Thunderbolt series for experimentals. A few high-end quality shops cater to such hot rod modifications including special parts such as Monte Barrett who has done engines for Patti Wagstaff and other aerobatic performers and racers (Barrett also does great work on certified engines).

We often hear claims of 15 to 20 knot increases in cruise speed with a boutique engine. Wish thinking? Probably, in our estimation. We think the biggest source of these claims is comparison to the old and tired engine, which may have been 20 percent lower in horsepower due to worn-out components.

For any rebuild or overhaul, there are new and service limits for parts. For a rebuilt engine to new-parts limits-the most popular form of overhaul-any old engine parts to be reused must meet the same dimensional specifications as a brand-new engine coming off the assembly line. New limits do allow for an oversized bearing to be used with a reground crankshaft. Obviously, new limits are a higher standard, and all things being equal can be expected to last as long as a brand-new part.

The matching some parts for weight, at least to the best factory specifications is valuable for a smoother-running engine. As far as we understand, no factory does lifter bleed-down checks, nor do most rebuild shops. This is probably the strongest vote for a custom rebuild.

Some custom rebuilds use new parts that may well be superior to the existing but serviceable parts in your old engine-a good thing as a rule. Remember that new accessories, such as brand-new mags versus rebuilt ones, will reduce the likelihood of down time. The costs can run quite high for new parts, but up time and reduced maintenance are worth it to many owners. Of course, you can get new parts from a top-quality field overhaul. As an aside, avoid field-overhauled carburetors. Theres a lot of junk masquerading as serviceable material. Get a new or factory-rebuilt one thats been flow-bench checked. Its more expensive, but worth it in satisfaction and performance.

What youre really getting with a boutique engine, in our opinion, is boutique service. Its a field overhaul where you can expect everything was done just right and all the best tweaks have been made. They also put on a nice paint job to boot. But like any extra service, you pay for it. Mattituck Services Red Gold engine runs $4000 to $6000 over their standard engines.

The premium for the Victor Aviations well-regarded Black II series isnt so steep, running $2000 to $3000 versus their Aviator rebuild with new cylinders. These prices are quite competitive with rebuilt engines coming from the factory and are probably a better product, but they are significantly more than a standard field overhaul. Note, too, that

In the end, though, we see little evidence a boutique engine will last longer or be significantly more powerful than a well-crafted overhaul from a good shop. The ravages of time and inactivity are the downfall of most engines today. Boutique engines dont really address this sad fact.

Logically, less vibration should mean less mechanical stress to airframe, engine, instruments and passengers. Its difficult to empirically prove, however, that internal balancing of an engine beyond factory tolerances contributes significantly to engine life or reliability. Theres no shortage of anecdotal support. There is empirical data from Victor showing vibration reduction compared to a stock engine at certain frequencies on an engine test stand. And Victors engine operation has certainly stood the test of time. If you want more than a standard overhaul job and have the time to invest and save some bucks, we recommend a new-limits overhaul done at a shop that lets you select your parts. If youd rather pay some extra and not sweat the details, the boutique shops are worth a look.

Kim Santerre is editor of our sister publication