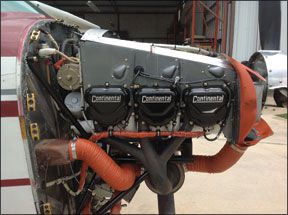 No replacement for displacement. There’s no substitute for horsepower. The clichés have been stuck in your head for a few months. You own a single-engine Cessna and you want more performance, but you don’t want to buy more airplane. You want to know if you can drop more engine in your airframe, how much it will increase performance, what it will cost and whether you’ll get the investment back when you sell the airplane.

We’ll walk you through the answers to those questions while providing a sampling of some of the amazing number of engine mods available for single-engine Cessnas. We’ll also discuss how to look at the cost-benefit evaluation of a conversion.

The answer seems obvious—until it’s overhaul time for that 1968 Skyhawk. An overhaul is going to run $20,000, installed. Suddenly the idea of swapping engines makes a lot more sense, especially if the owner has the airplane equipped just the way he or she likes it.

Therefore, many of the mod shops don’t tout cruise speed increases—and we view speeds that are claimed with a jaundiced eye. As Chris Shaw of Del-Air told us, “If you’ve got an airplane that’s a pig in cruise to start with, a bigger engine will only give you a slightly faster pig.”

Our rule of thumb for deciding on a power increase is that a desire for more speed doesn’t pay off. The exceptions are the turbonormalizing mods for the 177RG, 185 and T and P210s, which allows them to carry horsepower up high where they can scoot. If you just want more speed and your engine isn’t near time for overhaul, our opinion is that mods to clean up the airframe make more economic sense than an engine change.

Where horsepower increases shine are in rate of climb and takeoff distance. If your 150-HP Skyhawk requires 80 HP to remain level at Vy, there are 70 HP, more or less—depending on what the engine is really putting out—available to make the airplane climb. With a 180-HP engine, there are now 100 HP working to make the airplane climb, an increase of 42 percent. That’s a lot, and it’s directly proportional to the increase in rate of climb.

Cost
When considering a power-enhancement, figure on paying at least twice the installed price of a regular engine overhaul. Most of the mods provide either a factory re-man or new engine (it may be buyer’s choice), and almost invariably require a new prop because of the change in engine power output and vibratory environment.

Some companies refuse to publish a price. When we asked, they told us that each airplane is different (in some cases, the available list of options on the mod itself is huge), so they require the prospective customer to call, discuss what’s in the engine room now, spec out the options on the mod and then get a price. We were also told that it’s not uncommon for an airplane to show up for the mod and have some essential components, such as the engine mount, in such poor shape that the mod shop will not perform the mod without repairing or replacing those components.

Tornado Alley Turbo
Ada, Oklahoma-based Tornado Alley Turbo (www.taturbo.com) offers the Cardinal Cruiser conversion for the Cessna 177RG. It turbonormalizes (turbocharging that does not increase the engine’s power—it maintains sea-level horsepower) the existing 200-HP Lycoming IO-360 engine. We reviewed this mod in the May 2009 issue and found that it climbed at 600-800 FPM to 17,500 feet and cruised at 177 knots on 11 GPH once there—compared to the 145-knot cruise speed of an unmodified Cardinal RG. Price, installed, is $38,950. Kits can be shipped.

The other Cessna upgrade offered by TAT is the Turbo Cyclone for the 185. This turbonormalizing kit can go on either a Continental IO-520 or IO-550 engine. It allows sea-level power up to 24,000 feet. Price for this conversion is $42,950, installed. It includes a two-year, 250-hour warranty on turbo components and four-year, 1000-hour warranty on exhaust and induction air components.

P. Ponk Aviation
Norma and Steven Knopp reversed the spelling of their last name to create P. Ponk Aviation (www.pponk.com). In addition to overhauling engines, P. Ponk offers the Super Eagle conversion for the Cessna 180 and 182 and advertises resulting cruise speeds in excess of 158 knots. The company modifies a stock Continental O-470 or TSIO-520 engine to come up with a normally aspirated, carbureted 265- to 275-HP engine with a designation P.Ponk O-470-50. TBO goes up to 2000 hours if an oil filter is installed.

P. Ponk does not publish full pricing details, as each engine and installation is tailored to the specific airplane. However, it does state that overhaul and modification of an engine, depending on cylinders installed, averages $26,495 to $28,995 and the two- or three-blade propeller to be used costs from $10,595 to $13,600.

Texas Skyways
It’s not easy to keep track of the many engine upgrades offered by Texas Skyways (www.txskyways.com). For the various models of the Cessna 180 you have your choice of a 250-, 280- or 285-HP engines, all carbureted and all modified by Texas Skyways and having TBOs as long as 2500 hours. In our conversation with proprietor Jack Johnson he explained that his company does not publish prices because he’s seen so much difference between the installed equipment and condition of airplanes in the field, and there are so many nuances to the conversions that it’s necessary for a prospective customer to call.

Mods for the 182 have long been a success story for the company, so it’s no surprise that it is crowing about its most recent, a 310-HP IO-550-N/TS engine and Hartzell “Buccaneer” propeller conversion for the 182S and T models that gives a claimed top speed of over 174 knots. Johnson did tell us that this conversion is priced at $89,500 and includes a factory remanufactured engine, prop, new engine mounts and exhaust system. Other 182 conversions offer a choice of 250- or 280-HP engines, both carbureted.

For the Cessna 185, Texas Skyways offers two 300-HP mods; one with an IO-520-D engine (300 HP for five minutes, 285 max continuous) and one with an IO-550-D. Johnson told us that either will boost cruise by about 15 knots. Those same mods are available for the Cessna 205, which take an airplane with an outstanding useful load but sometimes anemic climb rate, and turn it into a short field machine and, according to Johnson, push cruise up 15-17 knots.

The 300-HP conversions are also available for most models of the 206, 207 and 210. Johnson said that the cruise speed increase for those airplanes is 12-14 knots.

Air Plains
Wellington, Kansas-based Air Plains (www.airplains.com) offers engine conversions for most of the Cessna 172, 180, 182, 182RG and TR182 series. Its website is one of the best we saw when it came to explaining the product line, costs and precisely which airplanes are eligible for each conversion.

There is a fixed pitch prop, 180-HP Lycoming conversion kit for the 172 that includes a gross weight increase and factory-new engine that starts at $39,000. Katie Church of Air Plains told us that labor usually runs about 60 hours and that the price can go up depending on the age of the airplane, type and condition of the engine mount.

The same conversion is offered for the 182H through R models with similar pricing and published performance.

For the 182RG and the TR182, Air Plains has a single mod that hangs a normally aspirated, factory-new, Lycoming IO-540-K1A5 and three-blade prop on the firewall.

Your shop does the installation—Devon Snyder advised us that it takes 20 hours in addition to a normal engine R & R. Penn Yan publishes a new cruise speed of 130 knots and a rate of climb of 1020 FPM at a gross weight of 2400 pounds.

Atlantic Aero’s John Ackerman told us that Atlantic Aero went after the STC when Continental dropped its “Platinum” service as a separate program and applied the Platinum standards and tolerances to all of its IO-550 engines, making it one of the smoothest engines on the market. Combined with the new engine mount, Ackerman said that the installation is so smooth that his company has had zero warranty claims on kit components. TBO on the engine is 2000 hours, 300 more than the 520 it replaces.

RAM
Known primarily for its engine mods for twins, RAM (www.ramaircraft.com) also offers bigger engines for the Cessna T206 and T210 series. Installed in-house or via a kit, the conversion is a 310-HP (285 HP max continuous) Continental TSIO-520 engine. RAM does not publish performance data. The existing propeller and governor can be reused—depending on their condition and ability to be reused, the conversion ranges from $55,423 to $66,150.

Conclusion
We agree with the sentiment expressed by a number of the modifiers—an owner has to go into an engine upgrade with the understanding that the cost will not be recovered when it comes time to sell, much as with an avionics upgrade. The purpose has to be to make the airplane into what the owner desires for future use, not resale.

Nevertheless, on that high, hot day, when the trees that used to loom so big now appear much smaller, a big engine conversion can be worth every penny.