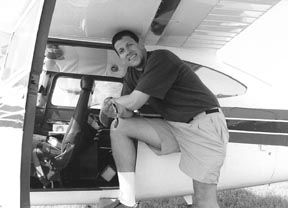 Aviation Consumer contributor Lionel Lavenue owns a 1999 Cessna T206H which was affected by Lycomings massive crankshaft recall. It began for most owners in August 2002. In March of 2003, his engine was finally delivered. What follows is a diary of his experience.

My story begins in January 2002. My mechanic had just grounded my 1969 Cessna 182 for 14 weeks and I was furious. The fuel pump on the aftermarket turbo had died and he couldnt find anyone to fix it. My wife and I decided then and there that wed buy a new Cessna T206H. Surely, a new T206 would never have those sorts of problems, we thought. How nave.

In March 2002, we ordered a brand new T206, but our local Cessna dealer told us nothing was available until December. So, we bought an almost-new 1999 T206H. During the pre-buy, the dealer made a point of the fact that the engine was virtually brand new, noting it had just come back from a crankshaft AD. It was still on mineral oil.

I flew my new 206 for more than 150 hours in three months, mainly for business. Then, in June 2002, I delivered it to my Cessna dealer for a complete avionics work over. I got the airplane back on August 8, 2002 and made one business trip. Eight days later, the impossible happened.

August 16, 2002 – I skimmed a post on the AOPA Website about another crankshaft AD, but I couldnt imagine it applied to me. I had a new crankshaft. So, on August 18 (a Sunday), I went flying and when I got home, my Cessna dealer had left a message. The AD affected my airplane. I was grounded and it was expected to last at least several months.

August 19 – On Monday morning, I sprang into action. I called Lycoming and was told that the priority for engine replacements would depend on when the paperwork was submitted. I called my Cessna dealer and he submitted the paperwork the same day, FedEx Priority.

Next, I called AOPA. Surely, they would agree that an AD that would ground almost 1000 airplanes was unreasonable. But to my surprise, they reported that AOPA supported the AD. I asked for a return call and they said Id hear from someone soon. Next, I called the Cessna Pilots Association (CPA) for help. They promised I would receive a call.

August 19 – My paperwork from Lycoming arrived. I was in the queue and I was early. Lycoming was talking about November and December deliveries. I was hopeful.

August 29 – AOPA never calls but the CPA does. They have bad news: Lycoming is reporting a potential grounding of up to six months and the CPA is helpless. In a rage, I again called AOPA. Again no response. But my Cessna dealer calms me down. He explains that Lycoming is willing to pay for a rental, especially given my business use. He offers to rent me a brand new C-172.

I call Lycoming and they agree to pay for the rental. We arrange the paperwork and I feel better. (By the way, as an aside to this story, my Cessna dealer is Jim Lampman at Virginia Aviation in Lynchburg. He was outstanding throughout this entire process; he deserves high praise.)

August 22 – With a ferry permit in hand, I deliver my T206 to my Cessna dealer and pick up the 172 rental. I fly home. I cannot believe this is happening to me.

August 30 – Lycoming gives my Cessna dealer a projected delivery date of March 2003. I consult my cardiologist.

October 9 – Lycoming sends a crate to my Cessna dealer for my engine. Projected delivery date is still March 2003.

October 30 – I read an interview with a spokesman at Lycoming who says that the AD only affected about 100 aircraft and the grounding will only be several weeks. On the back of the publication is an ad, which states: For quality parts, buy Lycoming factory parts. I wonder if Ive entered the Twilight Zone. Then, it really gets weird.

On February 15, Lycoming says my engine is in assembly but provides no expected delivery date. On February 20, I notice my engine is no longer listed on the Lycoming Website. I call and they inform me that its lost.

Lost? On February 21, Lycoming finds my engine. But, still, theres no expected delivery date. I seriously consider buying a Piper Mirage but nix that notion after recalling that its also grounded by the crankshaft AD.

February 21 – I receive a fax from Lycoming. After six months and five days, my engine is finally scheduled to be delivered on March 6. My wife and I rejoice. Its a short-lived celebration.

March 6 – No engine. Apparently, there is some major problem. Im told the delay will take another two to four weeks. Im in a slow boil when I call Lycoming for an explanation. They apologize and ask for patience.

March 20 – I call my Cessna dealer and he meekly admits that my engine arrived on March 17. Knowing that I have no patience, he had hoped to get a head start on the installation. I give him a week before I promise to go off the deep end.

If this were the end of this story, youd think I put Lycoming in the same category as Saddam Hussein and Peter Arnett. But youd be wrong. Despite my unbridled annoyance with the situation, I do give Lycoming credit. During this fiasco, around the first of January, I was contacted by a Lycoming representative regarding its customer care program deigned to reimburse grounded Lycoming customers for the inconvenience of the AD. The rep, Bill Witmer, served as a calming influence during the later part of the delivery delays.

Furthermore, Witmer asked me to prepare a list of expenses for which I would propose to receive reimbursement. He suggested that these expenses could include interest on payments, insurance, hangar fees, a fresh annual and other reasonable aircraft costs.

I dutifully prepared my claim and submitted it for consideration. It totals the low five figures. About six weeks later, to my great surprise, Lycoming agreed to the entire request, provided I would sign a release of liability for the grounding. I agreed and signed the papers from Lycomings lawyers. That was in early March.

As of the end of April, I have not received a check, due to some dispute between Lycoming and its insurance carrier, Im told. But Lycoming promises that Ill eventually get it. And if they are true to their word, I call myself a relatively satisfied customer. In short, Lycoming bought my happiness.

They were obligated to give me a working engine and the 12-month warranty was a nice bonus. But they were not obligated to actually reimburse all my costs and for that, they deserve significant praise. (Again, assuming I get that check.)

In this issue, we have surveyed a number of fellow Lycoming crankshaft survivors and most give the company low marks, an average of 5.5 on a scale of 10. I understand the ire of those customers and, to a degree, I share it.

On the other hand, even with an early lack of communication from Lycoming and despite the false delivery dates, money talks. If I get that check, Lycoming merits at least an 8 on its overall handling of the recall. The more I think about their generosity, a 10 is not out of the question.