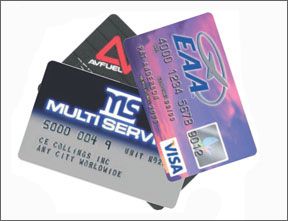 A comment on the article, “Aviation Credit Cards: Compare the Fine Print,” by Chad Trautvetter, in the January

Aviation Consumer. The FBO where I am based, and perhaps others, requires tiedown/hangar customers to keep an Exxon Airworld card on file against which fuel, tiedown and other charges are made.

Although I dont get airline miles through that card, it was an OK arrangement when billing by the card company was monthly with 25 days to pay, as noted in the article. With a sale of the credit card operation from a unit of GE to U.S. Bank N.A. at the end of 2006, billing is now every two weeks and payment terms have decreased to about 14 days.

Now, if a customer goes on a trip or vacation for a couple of weeks, there is a high likelihood of missing a payment and incurring substantial fees and interest costs. (Im a stickler for prompt, timely and full payment.) Two-week payment terms may be fine for business operators, but its not friendly for individual owners. Ive asked the FBO to consider changing its card requirement.

Let me get this straight. Aviation Consumer regards the payment of cash for fuel as an arrestable offense? In your January article, Chad Trautvetter somehow manages not only to make the act of refueling an aircraft illegal, but gratuitously ties it to 9/11 as well.

Will he next suggest that suspiciously failing to use the restroom during a fuel stop also calls for an aircraft search? You embarrass yourselves by your attempt to transform a mundane product review into a national security drama.

Oh, please. We merely reported the fact that in some parts of the country, paying a big fuel bill with cash may arouse suspicion. Further, unless the FBO offers cash discounts most dont you may be better off using a card that rewards purchases with benefit points. As always, pay your money and take your choice.

I take issue with an impression you have given in your credit card article. You seem to suggest that each additional credit card acquired represents increased risk and therefore equates to a lower computed credit score. Since none of the credit reporting agencies are required to disclose how they use software to compute their scores, you cannot know this with any certainty. My experience is that whats more important is the total available credit versus current outstanding balances.

In fact, someone can actually improve their score by obtaining additional available credit which they dont use! A reduction in score will occur if you are close to maxed out and especially if this condition has existed for a long time and you make numerous new requests for additional credit, because it makes you look like you are desperate. The old adage still applies: Credit will only easily be given to those who dont need it!

You need to be careful when you are advising people how to manage their credit. A woman I have recently been counseling had numerous accounts with low balances and lots of available credit. She was advised by one of her creditors to reduce her available credit lines.

This sounded good to her because it was a form of enforced (by penalties) self-discipline. It resulted in a lowering of her score and a current difficulty in obtaining a decent rate on a mortgage refi.

Regarding your article on Atlantic Aeros IO-550 conversion in the January 2007 issue, an F33A pilot reported “an increase in airspeed of about 20 knots at 3000 feet, meaning that his usual trip to the Bahamas now requires 1:40 rather than the 2:30 it used to take.”

After the conversion, to see such flight time reductions, a Bonanza will still need about 60 knots of tailwind. If Atlantic Aero can deliver that on every leg, the conversion is a bargain at twice the price.

Did we mention the warp drive option from Atlantic Aero? Actually, youre correct. Our owners numbers failed the sniff test and we never got around to correcting it.

I totally share your enthusiasm for the amazing Garmin GPSmap 496 GPS as stated in the January 2007 issue. I would like to suggest another way to use the 496. I

regularly fly over mountainous and unpopulated terrain in the West and I am concerned about the need to make an emergency landing in IMC or at night in my Cessna 210D.

I have installed the memory chip in my 496 loaded with the Garmin topo map data. The result is amazing. I am now able to find the smallest of roads which could serve as an emergency runway when I break out. Even more important, I now know of the location and elevation of the smallest of streams and dry washes, so I know the best direction to land even if in zero/zero.

Its far better to land along a ridge than across a gulley. Also, if I attempt to glide to an airport, I now know the height of any intervening terrain that might block my glide. With topo detail in my 496, I can tell exactly what is below me. I hope you will use your expertise to test the 496 for the above described emergencies.