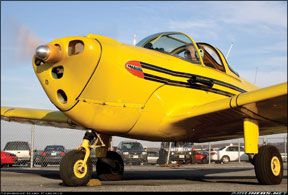 Im sure youre familiar with Joseph Juptners nine-volume U.S. Civil Aircraft series. Given all the aircraft that he lovingly writes about, you might wonder why he called the Luscombe the finest and most beautiful light aircraft ever made. He owned one.

Paul Berge is my favorite-and certainly the wittiest-person writing about aviation today, or yesterday, or at any time perhaps. But the judge must recuse himself in cases such as this unless he has owned all of the aircraft judged.

In Berges defense, he didnt specify the Champ in his report; we added it in the conclusion because, well, thats what we do around here. We test, analyze and pick a winner based on disclosed findings. Thats why the Champ won.

the Ercoupe is years ahead in design. It is the only legacy LSA with a starter, tricycle gear and modern aluminum monocoque construction.

You dont need a tailwheel endorsement and you dont have the risk and inconvenience of hand propping. With 24 gallons of gas and 100 MPH+ cruise speed, you can actually go somewhere in it. And with an electrical system, you can have some really handy things like a panel-mounted radio and a transponder.

The Coups interconnected aileron/rudder controls produce perfectly coordinated turns every time. The landing gear is designed for the lateral stress imposed by crabbed crosswind landings and they are a piece of cake when you get the hang of it.

The Coupe can be safely landed in crosswinds far higher than the taildraggers. It is certified as characteristically incapable of spinning. The Ercoupes qualities may account for the fact that the insurance on my 415-C is 30 percent less than the Champ. In my opinion, the Ercoupe ranks first among the legacy LSAs. A lot of other pilots must think so, too, since good 415Cs are bringing $5000 to $10,000 more than any of the others. Sorry, but I think you blew this one.

Great article on tires in the February issue. However, all the references were to new manufacture tires. I have been amazed that GA usually uses only new tires and the rest of aviation generally uses retreads.

Retreads are done to the same TSO as new tires and cost less than half of new. Also, they seem to last longer, due to the harder retread rubber. I get about 450 landings on my Mooney on a set of retread 600-6s. I am an A&P/IA trying to help out my pilot friends. I only install retreads and have never had a dissatisfied customer, just repeats.

In the aircraft loan article in the February Aviation Consumer, the emphasized quote states, “The loan process is less painless if the buyer does some prep work ahead of applying.” This means that if the advice offered is followed, the process will hurt more. I would consider this undesirable. Ignorance is more painful.

It pains us to say you are correct. The editor hereby atones.

I agree 100 percent with Aviation Consumers status on running your standby gyro. (See Letters, January 2008 Aviation Consumer.) I purchased a Mid-Continent gyro for my Seneca V this year and after installation, the avionics shop called to tell me it was hosed. I contacted Mid-Continent for support and the first thing they asked me was how long had it been on the shelf before installation.

Apparently, the oils and grease sit and collect after a while, causing the gyro difficulty in spooling up. The answer was to plug in to ground-power in the shop and let it run overnight. Two-hundred fifty hours later, it still works like a champ!

In your February 2008 editorial, you discuss the frustrations of dealing with things made in China and the challenges Cessna may inherit with their decision to move LSA production there. In the real world, when Im not playing pilot, I own a number of music stores that sell expensive pianos, ranging in price from $5000 to $150,000.

The parallel between piano production and airplane production may not be far off. Pianos are technical, demanding of exceptionally tight tolerances, have to hold up to over 20 tons of pressure on their plate when fully strung and have more moving parts than the motor of a car.

The pianos I have seen from China have been a challenge at best. To the untrained eye and ear, all pianos look alike and sound similar. Yet, the pianos we receive from China vary widely in quality and seem a constant challenge to keep in the best condition.

From major problems like cracked soundboards, to minor irritations like tuning instability caused by strings slipping through agraffes that arent just right in their placement, these pianos seem to say that China may not be the best source for highly technical products, although Im sure they would disagree. When companies move a staff of people on site to supervise production, quality seems to improve. But its been my experience that these products still come up short.

In the end, we really cant blame either the piano companies or Cessna for moving production to China. We can only blame ourselves. We are the ones who demand lower prices, leaving manufacturers little choice.