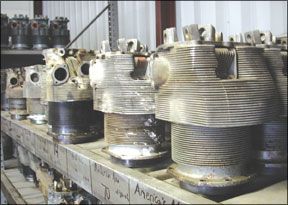 I have just read your excellent reports on cylinders in the last two issues. Great timing, as we had our plane, a Cessna 210 with an IO-520, in the shop for an annual. We had to replace a jug, the fourth one since this factory-new engine was installed in 2001 and now has approximately 1000 hours.

We were charged for 11.5 hours just for labor, not to mention the $1400 cylinder. This was in excess of the basic labor charge for the stock annual inspection. The $1400 seems appropriate to us, but the 11 1/2 hours of labor seems ridiculous, especially as the airplane is somewhat torn down for the annual. We were also charged six hours of labor to tweak the fuel flow.

seems four to six hours labor was about average to yank a jug and install a new one in the past. We think we have been shafted. Can you give us what you think is a reasonable ballpark figure on the hours to change out jugs?

Both figures you state strike us as high. For a cylinder change, four hours is on the lean side, but six to eight would be reasonable for a shop thats on its game. Barring unforeseen problems, a competent mechanic should be able to adjust Continental fuel flows in a couple of hours.

Your writing scalpel continues to sharpen and find its target! In the February issue, First Word flowed. But I would tweak the E-Chart issue just a tad: I was 30 minutes into an IFR trip a few weeks back when I remembered I had rearranged my Jepps-the destination state was on the office shelf. There was an easy fix this time, so I didnt have to return. I had been looking at a C-Max-equipped MFD (which I will be installing soon) and I would not have thought twice about continuing.

But for me, this does not apply to tablets. I have a jet professional buddy who reported to a trip with a strange aircraft and co-pilot. “Where are the Jepps?” he asked. “Oh, I have a computer,” replied the other pilot. My buddy said, “We are not going anywhere until there are paper charts on board.” Enough said.

IFR, has an article about an unfortunate crash apparently caused by complexity and unfamiliarity with equipment.

Your article on this is one of your best! Isnt the issue plainly how to get more reliable and readable-understandable-non-gyros and indicators, not how many “engineering triple gainers” (what a great term!) can be stuffed into an inscrutable “half-acre of glass?”

In the next few months, Im going to install a WAAS GPS navigator in my airplane, a Cessna Cardinal RG. Having read many articles and having tried both the GNS480 and GNS530, I prefer the GNS480. But-and there is a but-Im concerned about the long-term commitment of Garmin to the GNS480, especially now that the GNS430W and GNS530W are being sold.

Admittedly, that concern has hung over the GNS480 (CNX80) ever since Garmin acquired UPSAT. Does

Aviation Consumer have any information on Garmins plans for the GNS480 or an opinion?

We can only go by what they tell us. And Garmin tells us the GNS480 will remain in the Garmin product line for the foreseeable future.

In your March issue, the Acclaim ergonomics has SR22 and DA42 titles in the dimension box with only one column of data. How about two columns with the Acclaim and the SR22?

The article and the turbo sidebar did not cover a key question I have. Why did Cirrus and Mooney decided to install their own turbonormalized configuration rather than using the standard turbocharged engine from Continental?

Actually, we hadnt intended to include the SR22 data. It was an artifact left over from a previous issue. Sorry for the oversight. As for your second question, see page 4 of this issue for a complete analysis.

Our review of the Zaon MRX in the March issue failed to report that the $475 price we gave was for a non-audio unit. At press time, the price on the audio-enabled unit has been set at $549. The article should have noted that.