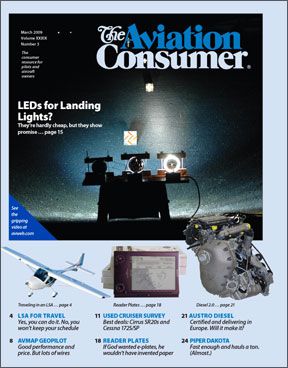 There is absolutely nothing wrong with your evaluation of three landing lights available to general aviation aircraft. (See March 2009 Aviation Consumer.) I think it will be extremely useful to many aircraft owners who have to wonder what the best option for landing lights really is.

However, I am writing because I believe that my company, Laminar Flow Systems

Inc., has available a Final-Light LED landing light which would have produced quite a different result, if it could have been included in the tests. I am not faulting Aviation Consumer for not including it-the Final-Light is only just now becoming available, although I showed it a Oshkosh a year ago. It comes with an FAA DER approved 8110-3 form included in the $350 to $400 price.

Since there is no immediate prospect of a new test happening, I have made a video of a similar test, which included our Final-Light as well as the ones AC tested, and some other combinations. You can see the video at http://snipurl.com/euzla. You can also find it on YouTube by searching “LED Landing Light Test.”

I cannot pretend to the impartiality of the Aviation Consumer tests, but I will state that all the lights were tested under the same conditions. I will also be sending Aviation Consumer a Final Light in the hope that you will get a chance to evaluate it soon.

We do plan a follow up LED test in the next couple of months.

I have a Turbo Arrow which, until last year, was factory stock in the engine and instrumentation department. I did a top overhaul last year as my almost 1000-hour cylinders were using too much oil. I historically ran at 33 to 34 inches MAP and 2400 RPM and did not have any overheating issues except for long climb outs in summer, when the electric pump on low helps cool the engine.

As part of the top overhaul project last year, I installed the Merlyn wastegate as well as the LoPresti cowl. I began experimenting with other power settings. I found that I can now run 65 percent power, maintain my previous airspeed, burn less fuel and the engine runs cooler. I have since tried lean of peak. Using the “big pull” process, I found that at 65 percent power, TIT peaks at 1600 degrees at 11 GPH then drops back to 1550 at 10 GPH. Oil temperature is about 160 degrees F and CHTs are about 350 degrees F.

I have read and reread your lean-of-peak article in the January 2009 issue and also reread your January 2003 article on your Mooney 231 with GAMIjectors. I have concerns whether I can safely operate this way with the standard Piper instrumentation or is it absolutely essential to install an engine analyzer somewhere in my limited panel space? My biggest concern is that even though 65 percent power at 10 GPH LOP seems to work ok, are there one or more cylinders which might still be running ROP and overheating?

To operate lean of peak with confidence, you should have a multi-probe digital engine monitor. Without the data it provides, youll have no way of knowing which cylinders are peaking when and what your individual CHTs are. You may or may not need GAMIjectors. But get the monitor first, then do the lean test and take it from there.

Perhaps Mr. Bertorelli has simply run out of things interesting to talk about, because the April 2009 editorial was as poorly researched as it is judgmental. Studies from numerous universities with far better credentials than Mr. Bertorelli have debunked most of his slanted criticism. I really resent being preached to about the politics of oil in the one magazine Ive come to enjoy because it doesnt resort to political proselytizing. So much for that.

Frankly, the Belvoir Aviation Group should stick to aviation issues instead of replaying old and outmoded assertions about corn-based ethanol. Even if that were not the case, stick with aviation, its more fun for your readers and certainly more appropriate for Aviation Consumer.

Weve sent Mr. Bertorelli to his room-without his computer.

This is relative to your Used Cruisers article in the March issue. Excellent article and I certainly agree with your conclusions. I guess I have to, as I own a 2003 SR20. I think this airplane is the economy champ of the 21st century. Excellent speeds and miserly fuel flows. Anyway, I have several comments or corrections. My airplane is SN1269, the second all-electric SR20 delivered. I took delivery on January 21, 2003. So the all-electric was in 2003, not 2002. The PFD came later that year, April or May. It was a $25,000 option at first and then made standard with a commensurate price increase.

Frankly, I wouldnt pay the difference as I dont think its cost effective. The airplane doesnt go any faster, burn less fuel or carry more load. I know glass is the rage today, but not for me. Now the Avidyne 5000 MFD is a real gem. With that gear, single-pilot IFR in New York airspace is a piece of cake. Make sure you get the E-Max Engine Monitor. It was a $5750 option and worth every penny

There were some comments about early model door fits. The problem is mainly one of adjustment. A knowledgeable Service Center can probably correct this. I havent flown one, but I keep hearing whispers of the G3 being faster. Cirrus makes no claim, but there are several tweaks they made that should help. Cirrus is progressive. The G3 is definitely a nice refinement to the series.

Thanks for the great article on traveling with an LSA. (See March 2009 Aviation Consumer.) I needed to hear the useful side of the story, not the salesmans hype. I went to Sebring this year to check out a possible LSA replacement for my current aircraft. Several were flown, and I was especially cognizant of the storage areas. As you mentioned, most designs were a simple shelf for your hat and jacket. A few could carry a sleeping bag, small tent and a small duffel. Only the Jabiru and LSA Cub Crafters could actually carry a load.

Then, of course, there are the homebuilt LSAs like the Just and the Zenithair CH 750, both which could beat any LSA in the useful load category. One bright spot was a new, all-aluminum LSA from the Ukraine, the Skyeton at a good price and with a fair baggage area.

Despite all this, I like to air camp and travel around North America, so I think Ill keep my trusty Cessna U206F, even if it does burn 13 GPH. It certainly flies a great deal smoother and faster than any LSA. Hopefully, my body will continue to pass the Third Class medical.