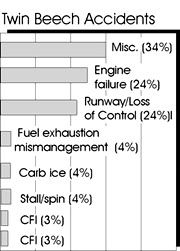 Lake AD
I can sympathize with Lake Aircraft in the dilemma you reported on in your May 2002 issue. I can only imagine the amount of money invested in the parts inventory.

But it occurs to me that no matter how long it took to raise its ugly head, this problem appears to be caused by a deficiency in the design. If so, that is a Lake problem.

It also occurs to me that accepting the FAAs terms of the AD and agreeing to purchase all the required inventory was a bad management decision. Lake should have negotiated a better agreement on the AD.

Expecting the owners of these aircraft to pay the exorbitant costs of the parts is not realistic. If Airtech Canada can make a profit on the part at the lesser price, then so could Lake. Instead, they chose to make the customer pay.

The patent enforcement company might have been able to wait for the foreign patent and gone after Airtech.

When they sold the patent, Lake knew exactly what they were doing. In my view, they turned their backs on the same customer/consumer who puts food on their plate.

Lake obviously didnt think about what they were doing or didnt care, in my opinion. The really bad part of this story is that because the patent is no longer theirs, Lake cant undo the mistake they made.

Lake may or may not even consider their actions a mistake. But what they think isnt what counts now. Its what the potential customer thinks that counts.

Now I dont own a Lake but I will have an amphib in the future. One thing is for sure, it wont be a Lake. Their reputation for customer service is shot as far as I am concerned.

And how many people like me refusing to consider their product will it take to change the profit from the sale of the patent into a loss? In fact, the customer keeps them in business and the customer, or lack thereof, can put them out of business.

Airtex Follow-Up
I just read your article on DIY interiors in the May issue and agree with everything author Brian Peck had to say. About a year ago, I purchased a new interior for my Grumman Tiger from Airtex. Got the complete set; floors, seats, walls…everything.

I was very pleased with the quality but I did have to trim to fit an inch or two on every piece. I also took one look at the slip covers they sent for the seatbacks and took them to my upholstery shop for more work.

All and all, I would give their kit an 8.5 on a scale of 10 and recommend it as a very doable DIY.

Cirrus Parachute
The article in your May issue comparing the Cirrus SR22, Lancair Columbia and Mooneys Ovation 2 is right on the money.

The wish list, including making the Cirrus ballistic parachute an option on the Cirrus airframes alludes to a flaw in the Cirrus Design philosophy that saddles owners with a liability rather than an asset.

With the recent fatal crash on April 24th of an SR22 in Parish, New York, the enigma grows. And now Cessna is considering a ballistic chute too! It would be interesting to see an analysis of the perceived value of such devices on aircraft with gross weights in excess of 2500 pounds.

Improved TPAS
I read your article on two of the traffic detectors on the market and noticed that it was done with one model which the manufacturer claims has been upgraded.

Surecheck says the new model is the RX-110.Have you guys tested these two out?Is there a big difference? Which one would you recommend for a pilot like me who rents and flies three or four times a month? Which one do you think is the better deal for the money?

Surecheck told us the RX-110 has improved circuitry to reduce the instance of false alarming and the company promised to send one for our review but hasnt done so thus far. We still think Monroys ATD-200 enjoys a slight performance edge.

York Lock Beef
Viewing the photo of the York GustLok that accompanies your article on ramp security devices, its not surprising that you found its theft security lacking.

The GustLok is clearly installed incorrectly. When installed correctly in accordance with the instructions and padlocked, it is impossible to remove without a hacksaw and so it does provide theft protection.

It was not installed according to the installation instructions for two reasons: The parking brake handle, which is directly underneath the yoke, intruded on the space that normally would be used by the gust lock, forcing it out of position.

In addition, the new Cessna yokes are beefier than the old ones and make it impossible to fit the U channels to the yoke in the way specified by the manufacturer, with the open part ofthe U facing aft. This despite the fact that we specified a 172R or S when arranging to test the product.

We jury-rigged the unit as best we could. Even so, were convinced that the metal is flexible enough to make theft a real possibility even when the GustLok is installed on an aircraft that it fits better.

From a security standpoint, the limiting factor, in our view, was the way it wedged onto the rudder pedals, not the yoke.

Twin Beeches
I began seriously looking for a twin after picking up nearly an inch of ice on my A36 Bonanza in May in a couple of minutes on the windward side of the Alleghenies.

I could have added TKS to the A36 for $25,000 installed. However, the room and the comfort of the second engine started me looking at twins. After looking at the Cessna twins and finding poor quality compared to a Beech and flying Walter Atkinsons C45, I started looking at the Beech 18. The family absolutely loves it! The potty is a definite plus.

I no longer get the this is a little bit dumb feeling I used to in the single when heading out over water to Grand Cayman or Guatemala or even Lake Erie. That is a big plus. The spacious cabin is terrific. Last fall, we hauled two nephews tocollege (St. Louis and Boston) with all their gear. No problem and a couple hundred pounds under gross with full fuel. Ive taken out a seat and slept in it at Oshkosh.

Then theres the cool factor. Bonanzas are cool also, of course, but more common. The only other options for me would be an A36 with turbo and TKS or an Eclipse, or a King Air, the latter two if I were wealthier than seems likely.

Every six months, I fly with an instructor who has 4000 hours in Twin Beeches and we shut down engines (one at a time, wise guy), at altitude and do single-engine approaches at the zero-thrust setting.

The CFI lost an engine at gross just after he retracted the gear once when flying freight at max gross weight. He said it took 10 miles to get enough altitude to start a very shallow turn back.

So, its possible to survive the engine out. But to really get good takeoff single-engine performance, get a King Air. On the other hand, the way we mostly fly is under gross and it probably will fly okay with a takeoff failure. I practiced at 6300-foot density altitude recently and the airplane would climb at 100 FPM at about 1000 pounds under gross.

The last two full years I owned the A36 showed a total of 175 hours averaging to $109/hour, again without engine reserve.

The big extra cost over the Bonanza is insurance and the fact that I was subleasing space in my hangar for $300 a month when I had the A36. Theres no roomfor another aircraft now, so I pay for the hangar myself.

Insurance is $4648 this year versus $1692 the last year I had the A36, up 9 percent from last year. I have about 1500 multi-enginehours and the same number of seats and hull value as the A36, so the high rate must be driven by the safety record of a few of the freight folks flying 18s.

The overhaul of the 450 HP left engine last year, with all the accessories, was $27,986. That includes new gears in the magnetos, Nuchrome and powder coat on the jugs, new pistons, heavy piston pins and low-time cylinders.

The base overhaul cost is $19,500, with the add-ons listed above making up the difference. Add another $3600 for overhauling the three-blade prop. These figures dont include labor or new hoses.

As a rule, preflights on the 18 are done the day before to allow plenty of time to fill the oil and anti-ice reservoirs and check over a big machine. That lets me turn on the hangar heaters in the winter too. At 10,100 pounds, it requires the use of a tug to get in and out of the hangar.

On the plus side, it was certified for 80/87 fuel, so I dont worry when I take it south of the border, nor about availability of 100LL in the future.

Correction
The address given for Alpha Industries, maker of the Alpha Lock security device, was incorrect in the May issue. The correct address is:

Twin Beech Safety Revisited
Because of a search-string error, our review of Twin Beech accidents in the May issue was based on only 18 accidents between 1990 and 2001.

Our second analysis didnt change our conclusions much, however. The three top causes remained the same, although the order was reversed.