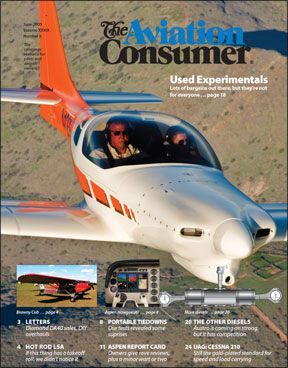 Reference your article on tiedowns in the June issue, you ought to have a look at 4-foot communications screw anchors. You need to carry a piece of rebar to put them in and they are a little bulky.

But if you can get them in, your wings will pull off before they pull out. Ive used them to anchor a Cessna 185 all around Alaska. At $40 for a pair, theyre the cheapest aviation anything you can buy!

Just about any wholesaler, like Graybar, that sells anchoring products for the electrical or communications industry will have them. Heres a Web source:

Congratulations on a great article on the 210. Thoroughly enjoyed it. However, one comment caught my eye on page 27 “Owners report…annuals that run around $2500 to $3000.” Sorry, I dont buy that.

In 2003, when I was looking for an aircraft, I purchased a used 1982 TR182. I would rather have had a T210 but, being picky about my maintenance, I was not sure that I could afford to maintain the aircraft properly. I settled happily on the TR182, which has been a great airplane. Since 2003, my annuals have been:

These are the out-the-door costs and, by the way, the 2004 and 2008 annuals were owner assists-not Cessna service centers, but reputable mechanics. I believe that what you are showing is the basic shop charge for the annual inspection.

I think that this could be very misleading. I suggest that you show total costs for the annual and include the shop basic annual charge if you like. That would give a much more realistic cost of ownership to prospective buyers.

If I were to believe those annual numbers, maybe I should have purchased a T210.

Actually, those numbers come from owners, which we generally take at face value. Some owners quote just the inspection, some the total. But most dont itemize in their letters.

I read your Aspen article and generally agree. Ive had the system installed since July and it has performed perfectly.

A couple of things I dont care for are the instantaneous rate of turn and instantaneous VSI. In turbulence, those meters are jumping around so much that they are nearly useless and I find myself reverting to the old, more heavily damped originals.

After owning a 1970 Piper Cherokee 140/160 for several years, I knew I wanted an airplane designed and built in the 21st century. I now own a Vans RV-9A with a Lycoming O-235 engine, completed in 2007, with an all-electric panel and modern avionics.

I regularly cruise at over 135 knots and burn less than 5.5 GPH with efficiency close to that of my Honda Civic. The RV has a useful load of 646 pounds and a full fuel (36 gallons) payload of 430 pounds. Thats me, one passenger and baggage.

But more important to me than any of the specific performance data is the fact that the RV-9A is a docile, stable and easy-handling airplane with excellent low-speed handling and control.

As you noted, not all experimentals are in the low-and-slow or high-and-fast categories. The 9A, for example, even with the small (118 HP) engine, flies reasonably fast, lands slow and is proving itself to be an efficient, fun and stable traveler.

Regarding Mr. Kittenplans exception to your comparison of the AA5B Tiger weight in the May 2009 article about the Beech Sierra: Your original chart was absolutely correct and based on the Pilots Operating Handbook data. Your chart did not show “almost” 750 pounds of payload/full fuel, it showed 721 pounds, which is correct based on the 1977 Pilots Operating Handbook I got with my Tiger. (2400 pounds gross weight, 1377 pounds empty weight.)

I have no problem with your original graph. It was correct based on the best available data and provided a quick, accurate comparison with the other aircraft listed. I trust the other parts of the chart are similarly based, so I consider those comparisons valid.

Its nice to see you concede to errors on the rare occasion theyre made, but this wasnt one of those times. Every experienced pilot realizes the limitations and built-in perversities of published performance data. Please dont just take the word from one owner for the empty weight of his plane and apply it to an entire fleet.

Unless there is evidence that Grumman American published data that was more misleading than Cessna, Beechcraft or Piper, I think you should use that published data. What if I wrote in and complained that I had a Tiger that would go 150 knots and your charts should reflect that speed?

You wouldnt buy that as a basis for your charts (even if, in my particular airplane, it might be true) and you would be right to ignore that kind of anecdotal testimony. Please continue comparing apples to apples and let your readers interpret the data as published. Keep up the good work.

We could spend the rest of our natural lives debating aircraft specs. For our corrected chart, our starting place was the Aircraft Bluebook empty weight of 1360 pounds. We think this is a best-case figure that doesnt reflect the real world, although your airplane is close to it. In reality, we think typical empty weights are much higher-as much as 100 pounds higher when you consider in-service weight gain and all the junk owners install and carry around.

In that case, the real world payload with full fuel is under 700 pounds. Reviewing correspondence sent by other owners, we think thats a fair assessment. We rely on reports and comments from owners to inform our own judgments. Some owners are more accurate than others and, frankly, the values vary all over the map.