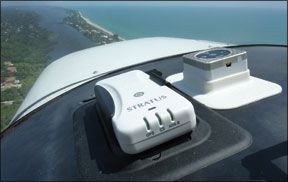 ADS-B For EFIS
I enjoyed reading your evaluation of the three most prominent ADS-B EFIS products in the June issue. I received my Stratus II about three days before reading your article. There is one, important negative feature of the Stratus II: It will only show the horizon in the landscape mode. If one has an iPad on a yoke mount, it will most likely be in the vertical position, so the horizon will be 90 degrees off. Otherwise, the iPad has to be taken off the yoke mount and held in the horizontal position, not easily done.

I spoke to Appareo about this situation and was told that they have had other complaints, but have nothing in the pipeline to correct it. The result is that the horizon feature is not really usable—something that would be unpleasant if the attitude indicator fails while in the clouds. My reason for spending the extra $200 to buy the Stratus II was to have the horizon feature. Had I known about the situation beforehand, I would have opted for the original Stratus model and saved $200.

Engine Shop Survey
I must have missed reading the call for shop recommendations recently, but in reading your editorial in the July issue, it appears that you and I had similar experiences with Bill Cunningham at Powermaster. He’s a solid, honest guy who does what he says and does a good job.

I had the opportunity to use Powermaster for engine services twice in a year’s time for my Bellanca Super Viking. First, they performed an excellent overhaul on my first-run engine. About a year later, due to my one and only act of pure stupidity in an airplane—prop strike at night—they performed a tear-down inspection and rebuilt the engine for me again. It came back running even better than before.

At the next annual, my maintenance tech discovered a new FAA interpretation on cylinder installations that meant I’d have to pull and replace the cylinders. Powermaster had followed the rules when it did the work—but the rules changed. Powermaster stepped up to the plate and helped me solve the problem with minimal cost and excellent service. I wouldn’t go anywhere else.

I want to add my two cents to your engine shop survey in last month’s issue, having had experience with two of your top-ranked shops in the last 10 years. In 2004, Triad overhauled the IO-360 engine on my Piper Arrow. Unfortunately, the case was repaired by a station that was sanctioned by the FAA and eventually closed. The engine leaked oil from day one. Multiple trips to Triad did not resolve the problem. I was told that I had not followed the oral break-in instructions I was given (no written guidance).

In December 2012, my mechanic found a crack in the case with oil leaking through the crack. The engine was removed and sent to Zephyr Aircraft Engines. Numerous cracks were found in the case and the cylinders required replacement. I had Zephyr overhaul the engine with a new ECI case, new cylinders and accessories. I’ve put 30 hours on the engine and am delighted with its performance and that it only burns one quart of oil every 12 hours.

My experience with Triad was not good, although Mike Branham in the shop was terrific in our dealings. Zephyr was very helpful—it obtained a new case over the holidays, presented me with, and explained, options on cylinder use and delivered the engine on time. I exchanged multiple emails and telephone calls with Charlie Melot, Herman and LJ regarding decision points and overhaul progress. I still chat with Charlie from time to time; he always returns calls and emails with answers to questions. Zephyr is a very classy operation with an excellent work ethic and knowledgeable people.

My wife and I are both pilots and subscribe to a variety of aviation magazines—our favorite is Aviation Consumer. I personally find value in just about every article, and I have purchased several of your recommended products. I just received the July issue. After years of using WD-40 to degrease the belly of two different planes, I’m going to try a bottle of Aero Cosmetics Wash Wax. Thank you for the article.