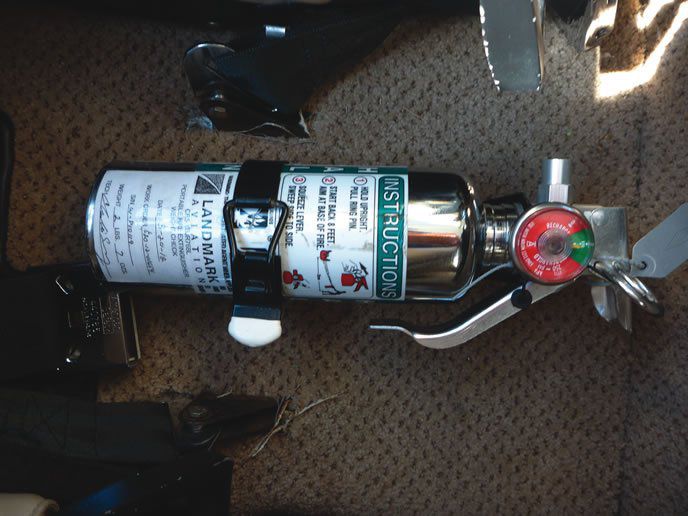 After reading the fire extinguisher article in the June 2015 issue of Aviation Consumer, I have some confusion about extinguisher size, partially because one photo example was apparently omitted from the article. I assume that a fire extinguisher with a “2BC” nomenclature in its model identification is two pounds of fire suppressant, and the “5” prefix indicates five pounds.

I have witnessed the aftermath of one crash—which was survived—and the fire extinguisher tore loose from its bracket and went through the windshield. That was a two-pound unit, so a five-pound unit would have about three times the energy (allowing for weight of the unit in addition to the suppressant.) The floor bracket won’t hold up to that, due to the limitations of the aircraft floor itself. It would require underfloor reinforcement and a much sturdier bracket than the one supplied with the fire extinguisher.

Another option would be to mount the fire extinguisher in front of all passengers, but I can’t do that on my Cessna 182. Mounting it on the floor between the seats is the only real option. The direction of travel of this eight-pound missile would depend on the angle of the crash, but having seen the one that went through the windshield, I am not comforted.

There are a lot more crashes than in-flight fires, so the larger extinguisher may or may not increase overall safety.

Second, while Halon is best, and what I have in my aircraft, worries about the corrosive effects are misplaced. Inflight fires are fortunately rare. If you survive one, having the aircraft totaled will seem like a pettifogging detail compared to being alive. I’ve actually used my extinguisher once, but it was in a post-crash fire of another aircraft; the two-pound Halon unit got the job done, but it was a small engine fire. I have a five-pound Halon unit from the 1950s in my office (it’s far out of its expiration date) which I’ve used on one tiny fire. It’s not considered legal by my local fire department, but it was much less messy and let me keep working after my dental assistant set the tray setup on fire (we use alcohol and a butane torch in root canals).

In general, for any given fire, the amount of Halon necessary to extinguish it is about half of that of other chemicals, although that is changing as new Halon alternatives are approaching the effectiveness of Halon. If the weight of the overall extinguisher is a concern, buy Halon to get the most effectiveness for the least weight.

As crash survivors, we are quite aware of the damage that can be done by any unrestrained object in the cabin during even a relatively low-impact accident and strongly recommend that anything in the cabin heavier than a throw pillow be secured.

In a response to a letter from SkyVision’s Harry Sanders in the July 2015 issue of Aviation Consumer, you state the following about ADS-B installation requirements to meet the 2020 ADS-B Out mandate:

Good catch, Owen. Sanders noted that FAR 91.336 replaced FAR 91.225 (not requiring TSO’d ADS-B hardware for EAB and LSA) for exactly that reason. But the rules could be changing again.

According to Ric Peri from the Aircraft Electronics Association, the FAA currently has a new advisory circular in draft which is specific to installing mandate-compliant ADS-B Out equipment in EAB and LSA models. It is expected to be released later this summer. We’ll report on it after we read it.

On page 27 in the Mooney 231 Used Aircraft Guide (July 2015 Aviation Consumer) you published a file photo of a Mooney 300 Missile instead of a model 305 Rocket.

Unlike the Rocket mod for the turbo Mooney 231, the aftermarket Missile mod for the Mooney M20J (201) includes an IO-550-A5B engine, which is normally aspirated.