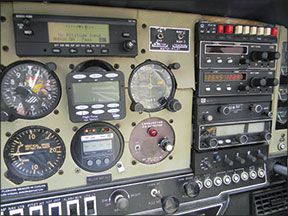 After reading Larry Anglisano’s article in the November issue about the conundrum in which avionics manufacturers find themselves, I couldn’t agree more with your conclusions. As an aircraft owner with a mix of newer and older avionics, I am one of those potential customers who are sitting on the fence, trying to decide how best to stretch my aircraft dollars. The debacle called ADS-B isn’t helping the situation, either.

I don’t see value in combo boxes like the KNS770 or GTN750. Mobile platforms have nearly all the map functionality in a much larger display, making them easier to use in flight. A good nav/comm and approach-approved GPS is all that is needed after that. (Mobile platforms do not meet the upcoming ADS-B out equipment requirement, and without ADS-B output, ground uplinked traffic performance is limited. —Ed.)
I have King radios now and had Garmin radios in my previous bird. Both are very good, though I think I favor King for a basic nav/comm. What I’d really like to see from King is a replacement radio for the KS-155-165—while nearly bulletproof, they are technologically long in the tooth, big and heavy when compared to the competition. If King can do to the nav/comm what it did to the transponder, I’d be inclined to open up the wallet.

Zaon
Do you have any information regarding the current status of Zaon Flight Systems? I’ve been trying to reach someone at their headquarters in Addison, Texas, without success. Last week, telephone calls were met with a “mailbox full” message. This week it’s “the call did not go through.”

As I live close by, I drove to Zaon’s home office. The door was locked during business hours. These are signs of a business closing its doors.

I’d hate to think that, as I have one of the MRX devices that I very much like, and I’ve been thinking of upgrading to the XRX model. I contacted Sporty’s and was told that Zaon had closed down. I don’t think it’s appropriate for a retailer to sell equipment when they know the manufacturer is out of business without disclosing it to potential buyers.

I’ll hang on to my MRX, but it appears there will be no further firmware updates as this required factory assistance. I’m bummed—I liked Zaon.

We cannot confirm that Zaon is out of business, although we have been unable to reach any of our usual contacts with the company and, at press time, the telephone numbers do not work. We are aware that at least two distributors are selling Zaon equipment at a highly discounted rate—their advertising does not disclose that the company appears to be out of business. In our opinion, that’s unethical.

We strongly recommend that any prospective purchaser of Zaon equipment confirm the company is still in business before making a purchase. –Ed.

Fuel in the Nose
I just read Rick Durden’s November issue column regarding fuel tanks in the nose of new airplanes. I’ve owned a Piper J-3, which has a nose fuel tank. Fifteen years ago, for convoluted reasons, I stalled and spun it to the ground even though I had over 7000 hours of flying time and several type ratings, including warbirds and the Ford Trimotor.

Of course, the nose-first impact resulted in fire. My next memory is EMTs preparing to transport me to the hospital. I was given a 50/50 chance of surviving my burns, including 30 percent full-thickness burns. The point is, as Rick says, don’t crash in a plane with fuel in front of the cockpit. I was lucky. I suspect many others have not been.

Akro For Under $100K
As an aerobatic airplane owner since 2004, I was interested in your October issue article about used aerobatic aircraft. I’ve owned a Super Decathlon and Extra EA-300.

Don’t be scared of wood spar Citabrias and Decathlons, but do a good pre-buy. The folks at the manufacturer also have excellent descriptions and pictures to guide mechanics. Pitts’ wings have always been made of wood and hold up beautifully.

Check metal-wing Citabrias and Decathlons carefully for fuel leaks from cracks in the tops of the tanks—the fix is expensive. Make sure any 180- or 200-HP Lycoming-powered airplane with a constant-speed prop has a “B” model prop hub or face expensive, recurring inspections. Definitely join the International Aerobatic Club, as it has tremendous technical and historical info on all akro airplanes.