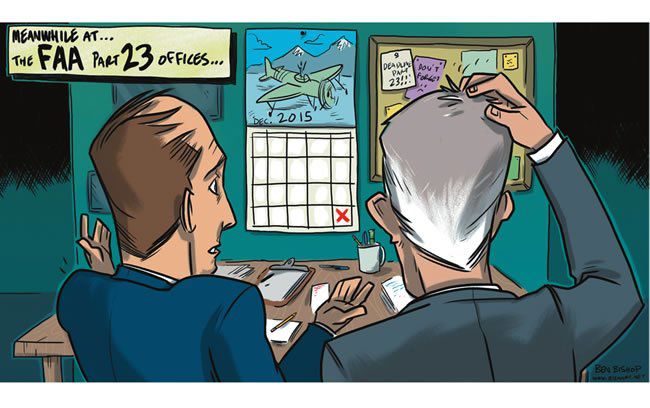 CERTIFICATION WOES
I read with interest your article on the FAA and the new Part 23 revision in the December 2014 issue of Aviation Consumer, and would like to share my experience of obtaining STC certification and PMA approval.

I began work on a new fiberglass cowling STC for Grumman AA5B Tigers in 2000 and had it ready to fly in 2002. I flew with the first cowling-without approval-for almost two years. The reason I didnt start the actual STC approval process earlier was because of fears of what might be involved. I finally hired a DER in the spring of 2005.

The first hiccup came when the DER told me I couldnt fly my plane with the installed cowling. The DER claimed he couldnt prove the conformity of my parts or the tooling because he hadnt been involved in the project since the beginning. He also hired his own CAD technician to redo my drawings-someone who knew nothing of my requirements or my previous drawings that were already in place. To my surprise, he never incorporated the updated drawings I sent, which were a work in progress during the ongoing and critical fabrication process.

From the first mockup to the issuance of the STC took nine years.The entire project cost me about $250,000 if I factor in my labor at my shop rate. Fabrication (for two cowlings) and tooling was about $30,000. Correcting the baffle drawings cost me another $4500, plus $5500 worth of scrapped aluminum used on no fewer than 10 sets of baffles that didnt fit like I wanted. The DER cost me over $100,000 over a period of four years.

Ive been involved in other projects that required PMA approvals, including a fiberglass instrument panel overlay and eyebrow assembly for the Grumman. These PMA approvals took four years and cost $10,000.

My point is that most of my negative experiences have come from the DERs Ive hired to work with the FAA, and not from the FAA itself. For the most part, the FAA has been extremely helpful.

My next project is a parallel valve IO-360 engine mod for the Grumman Tiger. The engine is on and the plane is waiting for me to find some time to finish it. I plan on doing most of the work on the STC myself and only hire a DER if absolutely necessary.

I dont develop these parts, go after STCs or get PMAs because I expect to make money at it. I do it because its my passion. My wife and I work only on Grumman Cheetahs and Tigers, and we maintain about 40 planes a year. Most of our profits go back into the business.

SWEATING ADS-B INSTALLS
Larry Anglisanos commentary on botched ADS-B installations in your January 2015 issue made me wake up in the middle of the night in a cold sweat. Unfortunately, I think his words are right on the money.

I recently had a Garmin GDL88 installed in my twin by a shop that talked a good game, but it took them three tries to make it all work properly. To be fair, I had a bunch of other work done, but I didnt think the interface was that complex. I can only wonder what the consequences would have been for my Part 135 operation had I waited until the last minute and couldnt penetrate ADS-B airspace.

In an answer to a readers letter in your December 2014 issue, you state that Garmins new low-cost GDL84 interface doesnt have a ADS-B mandate-approved WAAS GPS.

Since the GDL84 definitely has a WAAS GPS, is there something you know about it not being approved as a primary position source?

I prefer the GDL84 for its Bluetooth wireless tablet interface over other systems that require a panel display.

When we said the GDL84 wireless interface didnt have a mandate-approved WAAS GPS, we were referring to the Garmin FlightStream Bluetooth transceiver. This is the remote device that serves as a communications hub between the tablet and the GDL84 ADS-B transceiver. While it has an integral WAAS GPS, it is not an approved position source for satisfying the mandate. The GPS inside the GDL84 is fully compliant.

WHICH AERODIESEL FUEL?
I have a question about aerodiesel engines. One thing not discussed in your ongoing diesel engine coverage was actually using real diesel fuel versus Jet A. Can these engines burn the diesel fuel we get at gas stations?

Keep up your great work.

The Continental CD-200 engine, for example, is approved for Jet A or road diesel, or a blended combination for European approvals.