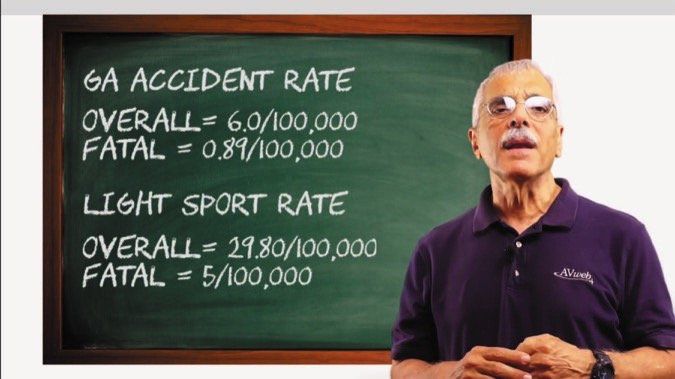 I enjoyed your LSA accident review article in the August 2018 Aviation Consumer. I was a Light Sport pilot examiner (DPE) for many years until I retired at the end of January this year, so I have more than a passing interest in the category.

Conspicuous by its absence is any mention of the Evektor Sportstar. We had (past tense) several of them here in southern Indiana, and I administered a lot of checkrides in the Sportstar. I believe that the Sportstar is a major player in the LSA community, with a couple hundred of them flying in the U.S. At one point I think they were the third most numerous LSA, behind Flight Design and Legend. That would put them in the middle of the pack of the ones you considered. And I know the Sportstar had its share of accidents. Why did you omit the Evektor from your accident statistics?

We initially set out to include all the LSAs, but because of the sheer number of manufacturers, had to pare it down to something manageable, both for editorial space and time resources. That project required close to two weeks of work so we contained it by picking the top 10 aircraft in the FAA registry. The FAA registry shows 92 Evektors in the U.S. That made it number 11 on the list.

The registry lags so there are more than that, but that’s true of all the airplanes. In retrospect, I might reconsider because the Evektor line has a pretty bad accident record. Just a quick look reveals 36 accidents, three of them fatal. That would give it the highest overall rate, and toward the top in fatal rate, depending on the time period considered. In a previous article, we did look at the Evektor and the results were about the same.

I’m trying to keep the panel of my 40-year-old Cessna 172 up to date, but in smaller bites and not having to drop $20,000 all at once. When looking at the options for digital attitude indicators, the devil is in the details.

I’m a belt and suspenders guy and not ready to get rid of my vacuum attitude indicator yet. I have two—the vacuum and the electric AI. I also have an Avidyne IFD540 that needs a baro input to sequence track-to-altitude legs for missed approach guidance. To get the baro output I could buy an air data computer and appropriate altimeter, priced over $6000. The more logical option seems to be an electronic attitude indicator, but Garmin’s G5, Dynon’s D10A or Sandia’s SAI340 Quattro don’t have the required digital output. But the L3 ESI-500 does.

Unfortunately, it’s only approved as a backup, which means I’d have to keep the old vacuum gyro in the primary position—ridiculous given the ESI-500’s capabilities.

When you looked at the backup EFIS market in 2015 you mentioned the FAA’s new guidance for installing electronic attitude indicators as primary without providing a specific reference. Recently, L3 informed me its instrument is only for backup. Where is the paper trail to convince a shop to install one as primary?

The shop is the one to create that paper trail, referencing the FAA’s policy statement PS-ACE-23-08, which we specifically wrote about in that December 2015 Aviation Consumer EFIS article. In summary, the policy statement says that it’s acceptable to replace single-function vacuum-driven attitude instruments with electronically driven attitude indicators as long as they have an independent standby battery capable of meeting the intent of multiple EFIS installation advisory circulars. Follow the guidance and the FAA considers the installation a minor alteration, as long as the instrument has a TSO.

The ESI-500 has an STC, which specifically defines the device as a standby backup instrument. A shop can lobby an FAA field approval as an alternate means of certification and you’ll pay for the additional effort, but with no guarantee that it will be approved.

In our view, it’s worth getting a proposal comparing that option with an Aspen Evolution EFIS, which has the air data outputs for the Avidyne.

As a longtime subscriber to Aviation Consumer, I would like to bring to your attention the common practice of misrepresenting the actual diameter sizes of the two common round mounting holes in standard aircraft instrument panels. The 2-inch instrument panel hole referenced in the September 2018 low-cost EFIS article in Aviation Consumer is actually 2.25 inches, and the 3-inch hole is actually 3.125 inches.