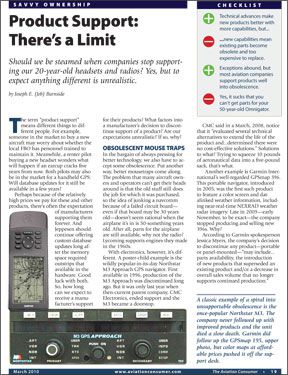 As a retired professor of economics, I cant resist adding to your article on product support in the March 2010 issue. First, all of us realize that producers are in business to make money. Period. No matter how much we might like to believe their warm and fuzzy marketing pieces, without profits, they leave. The fundamental accounting equations: Total revenue minus

total cost equals profit. Repairs and support are costs for any producer.

Second, we live in a changing world. What once was a nicety, is now a necessity. What once took a generation to exhibit change, is now changed regularly. So what we once thought of as a “capital” item is now more like a “consumable” item.

The world of 2010 is different. We have accelerated the introduction of technology. What has not changed is the way we as humans look at products. We expect that if we can hold it and it doesnt melt, then it must be a capital item. And we assume capital items can be repaired endlessly like the compass.

In the case of electronics, I would suggest that we should not view these items as capital, but rather as consumables. We can then reasonably calculate the amount of time that this will be with us and useful. Divide the price by months of use and you have a better framework for deciding whether to stick it in the panel or on the yoke, or skip it all together.

Interestingly, what causes some problems is that those of us who fly 1940s and 1950s aircraft have our minds set with respect to product evaluation in about the same time frame as the introduction of our airplanes. A 100-channel radio probably was good for 25 years. Then we went to 200 channels, and on to 360 and 720s. I daresay that I dont value any communications products beyond 48 months. And I cant tell you it is my choice, but just the way the world goes.

I was drawn to the Commander 112/114 review article in the December 2009 issue as Ive been a fan of the model for some time, though Ive never flown one. Id heard the mantra of “too slow and not enough load” many times, but had not investigated the numbers.

I need some help with the “fuzzy math” in the article. The model history chart indicates a 114 has a useful load of 1153 pounds. Minus the fuel of approximately 410 pounds, the payload is a respectable 745 pounds. Clouding the math further, the article mentions on page 27 that the payload of a 114 checks in at 950 pounds.

Considering my Cirrus SR22 carries 81 gallons useable fuel and has a useful load of 1100 pounds, leaving 614 pounds for people and gear, the payload of the 114 is downright envious! Whats missing here is the max gross, which is not mentioned on page 27.

Did I forget to carry a one in my calculations, or are the terms “payload” and “useful load” mixed up? Thanks for all the work your staff does to provide pilots valuable aviation information month after month.

One problem in reporting on the Commander line is that there are six different model variations, each with a different empty and gross weight. According to the Aircraft Bluebook Digest, the largest load hauler is the 114A with an empty weight of 2070 pounds against a gross of 3260 pounds for a useful load of 1190 pounds.

Fill it with fuel and you can haul 782 pounds. (The straight 114 has a 1235-pound useful load, according to the Bluebook listing.) Real world numbers vary from the Bluebook, but thats the general range.

A Vote for the Factory

Usually your writers cover most aspects of various options or points in your articles but in the “Top Overhaul Shops” in the March 2010 issue, its obvious that Jeff Van West does not fly an airplane for business purposes. Your conclusion on page 13 states that the rebuild shop is a better option than a factory engine. Not if your airplane is flown for business around the country.

There are two major points you missed. First, an airplane is down a long time to remove and rebuild an engine. That time out of service can run from weeks to months. Not a smart business practice if flying the airplane produces revenue or is used for business travel. A factory engine (new or rebuilt) can be ordered, received and then the airplane brought in for a quick engine swap and then back in the air.

The second point is that a local rebuild of your own engine (or even a rebuild by a national shop) provides a limited warranty in which the repair or replacement of the engine parts most often must be only done by the rebuild shop.

For those of us who use airplanes for business and fly all over the country, in most instances, a warranty limited to the rebuilders shop is worthless. If I have a factory Continental or Lycoming and I have a problem covered by the factory, any factory authorized factory service center can fix it.

If the local overhaul shop is based in Denver and I have a problem in New Hampshire then what?

In 35 years of flying, I am on airplane number eight. Two airplanes I had the local engine local shop overhaul with no complaints. But any warranty problems would only be corrected by returning to the rebuild shop.

Then as my aircraft business travels increased, so did my need for a quick engine swap and a warranty good anywhere in North America. So my next two overhauls were factory replacements. My downtime was days. The slight increase in cost was minimal compared to the flying time lost with having the planes engine rebuilt, anywhere.

The warranty with a factory engine has been used half a country away from my homebase and my maintenance shop. So while a local engine rebuild may be the cheapest way to go to get the job done. In the long run it can be very expensive in lost money and having a warranty that isnt good away from the overhaul shop.

Actually, a field rebuild is not necessarily the cheapest option. But the top shops provide better unstated warranty performance than the factories do, even at remote locations. If your field shop didnt honor your warranty remotely, you picked the wrong shop.

Reference your February First Word remarks, that was one of the best written pieces of journalism I have read in any genre. “Mother of Perpetual Guilt and Suffering” LOL!

Paul Bertorelli replies: Sister Salisha, rest her mean old bones, would never believe I finally did something to advance the cause of humankind.