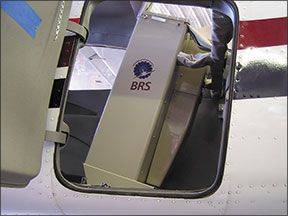 BRS Retrofit
I own a Peterson Katmai conversion of a Cessna 182P. While this letter references your recent (September 2013 issue) article about BRS retrofits for Cessna 172s, 182s and LSAs, I would like to compliment your staff on the comprehensive and accurate article about the Katmai/King Katmai in the January 2013 issue.

Renting Cirrus airplanes, my wife and I grew accustomed to having an airframe parachute. Thus, when I bought my Katmai, I elected to install a BRS airframe parachute. My reasons were similar to those cited in your article: to mitigate the risk—or, more accurately, reduce the consequences of losing one’s bet with the risk of flying over harsh terrain or in IMC and, of course, a spouse who strongly desired the extra safety feature.

As noted in your January article, the Katmai/King Katmai aircraft are very capable airplanes for back-country flying, so a BRS seems particularly valuable for an aircraft that would spend much of its time flying over terrain that most of the rest of us flight plan around.

Avidyne Product Delay
In the August 2013 issue you had a fantastic article about Avidyne and the continual delays of their product release. I asked Avidyne for a refund of my deposit and was told that they would hold my money for one year from the date of the deposit.

Shame on me for not reading the agreement carefully enough, but the sales rep at Avidyne told me that I could get my money back within the first year.

What kind of company is Avidyne that it refuses to refund a customer’s money when they continue to delay the product release and have now changed their support agreements?

First Word
I enjoyed the First Word column in the September issue and your observations regarding the drop in airplanes flying in to AirVenture. As someone in his forties, I am often the youngest airplane owner around on the tie-downs at AirVenture or at fly-ins. People who are not baby boomers came up after the big stock market and housing rise before 2008. For us, it is a struggle to own an airplane.

Obviously fuel is a major expense, but if you’re like me and live in a decent-sized community, hangar expense is terribly high. With the recent budget restraints in our county, they doubled our rents, but grandfathered in the old timers on the airport. We younger renters are paying three times what we did 10 years ago.

As airline service has improved and prices dropped from the 1970s and 1980s, most young people would rather go commercial when just to get a VFR private ticket runs close to $10,000. When the boomers get too old to fly, the pilot numbers are going to fall through the floor, and the cost of flying will really take off as FBOs and maintenance shops look to squeeze money from a much smaller pie.

My iPad mini was delivered at 10:00 AM. From then until 4:25 PM, I wrestled with Apple, ForeFlight and even my bank.

Once unboxed, you must set up the unit. After some frustration and a 45-minute call to Apple support, I learned you cannot set up the iPad without a wireless connection. I finally did get ForeFlight downloaded and set up with a Bad Elf Pro GPS via Bluetooth.

My first planned flight involved transitioning New York City airspace. After departure, I noticed that there was no airplane icon registering on the map. With another pilot in the other seat, I checked all the setting and device menus—all were correctly set and each showed the Bad Elf as connected and working, but no in-flight airplane icon on the map.

The next day (a Sunday morning), I emailed ForeFlight a description of the problem and three screen shots. I received a reply just before 1:00 PM that day. It suggested downloading a free “GPS Data” app from iTunes. It fixed the problem.

Since then, the iPad mini and ForeFlight combo have work flawlessly. The iPad is the perfect size for use in my Tiger, however, be warned, it’s not all roses, especially getting it up and running.