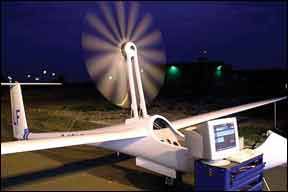 Electric Airplanes
When considering the viability of electric-powered aircraft, it’s important to note the huge difference between the internal combustion (IC) engine that burns hydrocarbon fuels and an electric motor that relies on a battery energy source.

The ratio of air mass to fuel mass at efficient combustion (stoichiometry) is about 14.6.  That is, for every pound of fuel burned, 14.6 pounds of air are consumed. But you don’t have to carry the air since it is available in the atmosphere. Fuel weighs about 6 pounds per gallon, so 16 gallons of fuel weigh about 100 pounds.  Over 1400 pounds of air will be consumed in burning that amount of fuel.

An electric motor requires that all of the energy be contained in the battery.  Since the energy density of lithium batteries is about 26 times less than the energy of gasoline, there is nowhere for electric propulsion to go.

It is interesting to note that gasoline has 10 times the energy density of TNT that needs to carry its oxidizer within.

More VGs
I wanted to write and provide my two cents’ worth of experience on the topic of vortex generators, which I was excited to see covered in your June 2012 issue. I own a 1975 Piper Warrior­—a solid and reliable airplane, but not exactly a high performer. About a year and a half ago, I picked up a vortex generator kit in person while I was up in Anacortes, Washington, at the Micro Aerodynamics hangar/offices.

After speaking for a half hour with Charles White in the Micro Aerodynamics hangar, I made the decision and never looked back. It was an easy and fun owner-assist install project under the supervision of my A&P/IA. Two evenings of work and I was done. And wow, what a difference.

As you noted in your article, the benefits will tend to vary from one airplane to another or even between two airplanes of the same year and model, since our aircraft are far from new or perfectly shaped.

In my case, the results were substantial: Stall speed was drastically lowered; aileron, stabilator and rudder control authority are all much better, especially at low speeds such as when landing; and—the most surprising part­—my cruise speed was even increased by a few miles per hour thanks to the cleaner airflow over that seam,- rivet- and screw-covered wing.

My Warrior is still essentially the Ford Taurus of the skies, but it climbs and cruises faster, the controls respond with much greater authority, it takes off and lands shorter and flies quite slowly with confidence. It’s nearly impossible to get it to fully stall and drop the nose since installing the VGs. It just bounces the nose up and down lightly from stall to flight.

I’d encourage anyone with an older airplane that has mushy controls when landing, or who wants a little better climb performance and/or added safety of lower stall speeds and better overall control, to give vortex generators a try.

What About T-Craft?
Jeff, I’m your favorite fan who currently owns a Taylorcraft.  (I’ve actually had three over the years). We had a discussion about the last issue on LSAs.

Anyway, I enjoyed the latest article on the legacy LSAs.  I see Paul absolutely, not once but twice, glossed over one of the fastest and cheapest LSAs out there.  I know you must have had him do this on purpose just to see if I was paying attention.

I was very disappointed.  I am also sorry I missed the AvWeb survey as I would have thrown my two cents in.  Just like I stated, the poor Taylorcraft gets no respect, but it is one of the fastest, if not the fastest and cheapest-to-buy legacy LSAs out there. Also let Paul know he is getting screwed at those prices for the Cub. Hahaha!

You found us out. Van West begged me, beseeched me to let him include the Taylorcraft in the legacy LSA article, just like I did when we did this article four years ago. Although I refused, he went ahead and did it anyway, right there on page 5. —Paul Bertorelli

I’ve got to say that I am impressed with these headsets. They were reasonably comfortable for that long a time, perhaps a little tight, but they are brand new. Passive noise attenuation is very good and then add the ANR and things are pretty darn quiet.

Things I like: The AA batteries rather than 9-volt; controls are simple and easy­—they do the job and ATC said my voice quality was good and finally, the price!

Concerns: I wish the control panel came with a hanging hook or a mounting bracket.  I made one up, but it would be a nice feature.

The noise attenuation is better and different from my old TELEX, and the airplane just sounds different.  I need to get used to that.

The old headsets had served me for about 3000 hours. I may try replacing the earseals that came with it with the gel earseals that I had on my old TELEX. May or may not be better, but I’ll probably try.

All in all, I think GCA has come up with a good product at a great price. I have always thought that ANR headsets were overpriced, so it’s nice to see someone make a major cut in the pricing structure. I just hope it’s not a matter of “you get what you pay for.”  Time will tell.