As a long-time fan of both Aviation Consumer and Greg Travis, I must tell you I am simply disappointed with Travis article The Oil Argument in the December issue.

In my view, its a one-sided treatment that preaches The Company Line of the Shell and Chevron marketing mouthpieces-who have a major stake in the outcome-while dismissing the collective wisdom from the field overhaul shops and owner associations.

For example, the article dwells on the TCM cylinder problems, which are completely unrelated to the choice of oil. It also dwells on the lubricity issue, which is largely irrelevant because our slow-turning loose-tolerance aircraft engines have such minimal lubricity requirements. If lubricity were important, wed all be flying with Mobil AV 1.

The article quotes Ben Visser as saying that the best way to avoid corrosion is to fly often. Everybody knows that, but the fact is that most owner-flown GA airplanes are subject to substantial periods of disuse, so the real issue is what kind of oil will put them at minimum risk.

The article is also laced with demonstrably false information, such as Vissers contention that multi-vis doesnt strip off parts more quickly than single-weight oil.

Its trivial for any pilot to prove Visser wrong about this. Simply take an oil dipstick reading an hour after coming back from a flight, then take successive dipstick readings at 24-hour intervals after that for a week.

Engine overhaulers know better than anyone else that in todays owner-flown fleet, we lose more engines to corrosion than to friction-induced wear. Top overhaulers are almost unanimous these days in recommending that their customers use single-weight oil whenever they can. (Whenever cold-starting isnt an issue).

Thats because the overhaul shops have seen an alarming increase in corrosion problems over the last decade and have correlated it with the use of multi-vis oil, particularly Shell 15W50, which is the most popular oil in GA.

Travis article cites TCM from time to time and you might think that TCM would be a reliable source of advice in this debate, but unfortunately they arent.

TCM has approved a range of single-weight and multi-vis oils for use in their powerplants. For political reasons, they are constrained from playing favorites.

TCMs company line is that if it meets the MIL spec, its okay; end of discussion. Asking TCM for advice in the single-vs.-multi-vis controversy is like calling up AOPA and asking them whether Cessnas or Pipers are better airplanes. They have no choice but to take the fifth.

Im very concerned that because of Aviation Consumers superb journalistic reputation and the fact that Travis article is well-written and well-edited and quotes seemingly authoritative sources-albeit only on one side of the debate-your readers will be persuaded that using multi-vis oil is a good idea, even if its really a terrible idea.

Multi-vis is appropriate in parts of the country and portions of the year when cold-starting is an issue. Multi-vis is also a fine year-around oil for working airplanes that fly every day or at least every week.

But multi-vis is a very poor choice for the typical owner-flown aircraft that regularly sits unused for weeks at a time, particularly during times of the year when the weather is warm and humid and corrosion is at its worst.

This is particularly true of aircraft that are not hangared, and aircraft based in high-corrosion areas, coastal or smog-prone areas, for example.

But this is the real world. We both know these things arent gonna happen. If the owners at least leave those engines with a nice thick coating of gooey SAE 50 oil, at least theyll have a fighting chance.

Mike Busch is a editor of AvWeb. See his views on oil at www.avweb.com.

Greg Travis replies: The problem in reporting on controversial subjects-and oil choice seems to be just that-is that you can find an expert to support whichever side of the argument you happen to agree with.

Over the years, we have talked to many field overhaul shops and cylinder suppliers and when pushed for detailed advice, most are far from consistent on multi-vis versus straight-weight oil.

In any case, in issues past, we have parrotted the engine shop line that straight-weight is the better choice, based entirely on anecdotal field experience thats long on opinion and short on consistent and convincing data. We think the higher incidence of corrosion damage, if indeed there is a higher incidence, is hopelessly clouded by frequency of use.

Is flying once a week enough? Or is twice a month enough? Does the length of each flight matter? How does climate impact the variables? In our experience, we havent heard reliable answers to those questions.

As for the straight-weight sticking to warm engine parts more effectively, weve tried the dipstick test several times (with W100) and-at least in a small-displacement Lycoming-we found that drip down stopped within 24 hours, not a week.

Were not sure how to settle this argument but our plan is to conduct some informal corrosion tests of our own, using multi-vis and straight-weight oil. In the meantime, we still think multi-weight is the best all around choice, especially in climates subject to wide temperature variation.

Were ready to change our tune if the corrosion tests are conclusive. 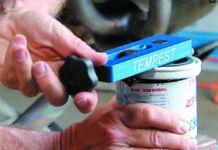