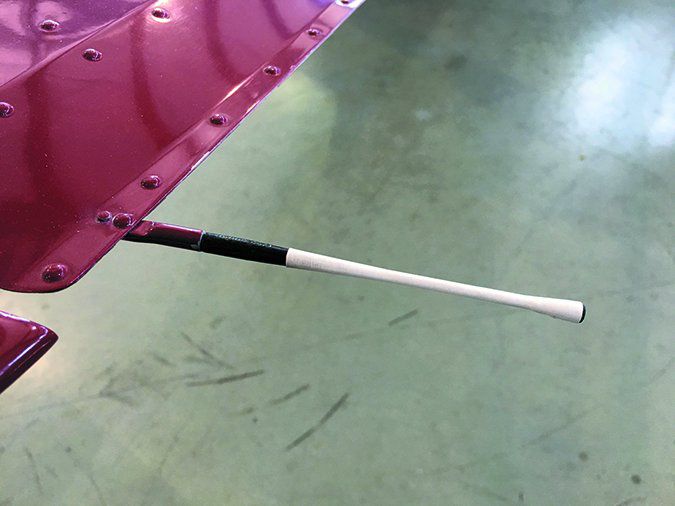 I read with interest the static wick article in the July 2016 issue of Aviation Consumer. If I recall correctly from a long time ago, static wicks can be tested for proper operation. I’m thinking it is a resistance test performed with a meter.

Assuming there actually is a way to determine the condition of the wick, it would have been helpful if you had included that information. If there isn’t, that information would also be useful. As it stands, the article seems to fall short.

During our research, we asked static wick manufacturers about ICAW procedures (instructions for continued airworthiness) and all noted that aside from a preflight visual inspection, it’s important to look for signs of corrosion where the wick attaches to the skin. Additionally, you’ll want to inspect the tips. Testing rarely happens on the shop level.

TCO’s Jon Snider told us the company measures the discharger with a megohmmeter during the production process, but noted that most shops don’t have access to this type of meter. These things can wear out. Snider said TCO discharge wicks are worn out when the corona points (the conductive fibers at the end of the wick) are no longer visible. All manufacturers and shops we spoke with agreed that wicks break off the aircraft far more frequently than they wear out.

The Garmin aera 660 GPS article in the July 2016 Aviation Consumer would have been a good opportunity to compare it to the iFly 740 GPS from Adventure Pilot. The company offers this dedicated GPS and also tablet apps for Android and Apple.

The iFly GPS device is more expensive than the Garmin aera 660, but the data subscriptions cost less. I fly with an iFly 720 on the left side of the panel, an iPad Mini on the right side running the iFly app, plus the iFly app running on my Android phone. The iFly 720 is mounted horizontally and the iPad is vertical; there is no need to rotate them in the mounts when flying east to west or north to south. If there is glare on a screen on one side, the other is clear. The apps and the iFly 720 are very similar in operation and can share flight plans.

I like the ability to plan and file from the tablet or phone wherever I find myself, then share the results with all the devices. The 720 is much easier to see in sunlight and is more reliable than the multi-purpose tablet and phone, though it’s not as bright as the newer iFly 740.

I find the iFly GPS device is almost bulletproof, the apps convenient and the responsiveness of Adventure Pilot to its customers to be unparalleled.

We hope you never get lost with all those devices leading the way, Don. We covered the current-production iFly 740 GPS in a flight trial article in the March 2015 issue of Aviation Consumer and it performed well, had a good display and we thought it was a big improvement over the older iFly 720 since it has an internal power supply.

As for the Aera 660 article, it was really a shootout between the GPS and Garmin’s Pilot tablet app.

I went to the Lightspeed Aviation headset factory to purchase a new Zulu 2 model and while I was there, I asked how they remove the stickiness that develops on the surface of the earcups on older models like my 3G. Lightspeed told me the condition develops in five years or less, depending on the temperature. Worse, the stickiness makes dirt adhere to the surface. While Lightspeed is well aware of the problem, I was told there is no solution. I developed my own solution by cleaning them with cornstarch to remove the stickiness. When I showed them the headset, they were amazed that it looks and feels like it’s new.

Worth noting is that while my 3G model came with a 5-year warranty, it doesn’t cover finish or appearance items. The company also discussed a potential problem with the black finish on Zulu models when they aren’t cleaned properly.

If you don’t want to bother trying to spruce up a deteriorated older set, Lightspeed issues credit if you trade them in. I turned in an old David Clark passive model and received a $200 credit toward the purchase of a new Zulu 2.

That’s what I love about Aviation Consumer—you guys include us poor folks by keeping affordable used aircraft in your coverage. That’s why I was thrilled to see a report on the Piper Warrior in the July 2016 issue. My three partners and I would love something faster, sexier and more modern, but our late 1970s Warrior keeps us flying on the cheap.