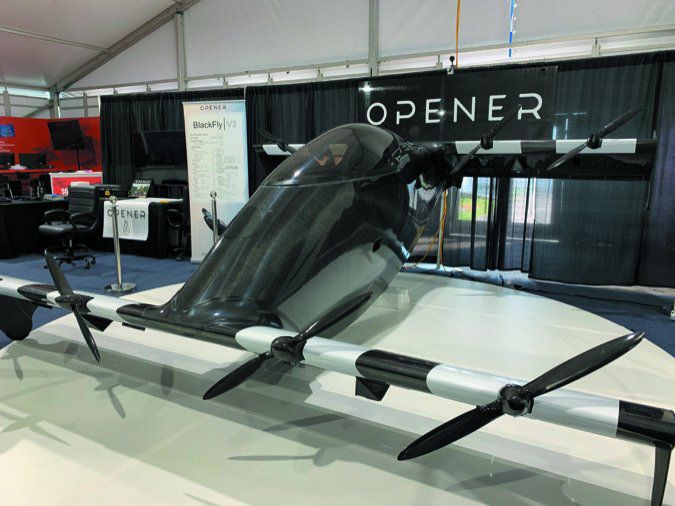 These are often first-time vendors invited to set up shop in the AirVenture Innovations Showcase building at Oshkosh. I like spending time there because it’s a good place to shoot. The lighting is good, it’s relatively cool and it’s the launching ground for products that are a little different than the ones around Boeing Plaza. Some make only one appearance at the show, but others have enough momentum to come back for more. That was the case with Opener Aero, which was the attention getter last year with its BlackFly ultralight.

The epitome of maturing electric tech, the VTOL ultralight is carbon-fiber and powered by eight electric motors-each weighing four pounds, making 130 pounds of thrust. This thing isn’t vaporware. Opener has been testing motor-rotor sets for more than four years, covering a distance equivalent to 20 circumnavigations of the globe during flight testing. With a 25 percent reserve, the VTOL can fly for about 25 miles before a recharge. With a regular 110-volt outlet, it can charge in seven hours, and in only one hour using a 220-volt outlet. We caught up with Opener’s Alan Eustace at this year’s show and it was clear the company has hardly run out of money. Eustace served as Senior VP of Knowledge at Google. Opener brought on Ben Diachun to lead the company as president. He comes from Scaled Composites, bringing a long history of building aircraft (a total of 16 from clean-sheet to first flight), and is now tasked with bringing the gen-three BlackFly to market. I think this is a project to watch, if only for testing the waters of FAA and market acceptance-two huge obstacles.

Still, I think Eustace could be understating the challenges of both. “Since the BlackFly is an ultralight, we get to determine the certification requirements and safety levels,” reiterating of course that the company has high safety standards. Eustace acknowledges the competition on the higher end of the electrics market, convinced that the market is exploding with evolving products that will build a new sector. In a setting where other vendors were practically on hands and knees begging for R&D money, Eustace said Opener has plenty of money in the bank to proceed at its own pace without the need to collect deposits.

An innovator showing more utilitarian products was Idaho-based Aithre, with a couple of smart devices for keeping tabs on inflight biometric data. Two products from the company that caught my eye were the Altus portable oxygen tank monitor and the avionics display-compatible carbon monoxide sensor. The O2 monitor is the result of the company founder’s struggle with seeing the behind-the-seat oxygen tank gauge in his Van’s RV-10, and running out of oxygen when he needed it the most.

The monitor is a simple upgrade to any tank and basically converts a portable oxygen tank into a smart device, with wireless (Bluetooth, of course) real-time monitoring of oxygen pressure, flow rate, pressure altitude and oxygen levels. It’s a smart system, triggering oxygen use reminders, low-level alerts and shutoff reminders on landing. Installation takes less than 15 minutes and consists of connecting a high-pressure tee fitting between the tank and existing pressure gauge and strapping the housing on using Velcro. The device runs on four AA batteries, detects pressure changes within a 10-psi resolution, samples pressure every six seconds with a built-in pressure altimeter and throws a low-oxygen warning when it drops below 500 psi. The system is designed to work with Apple smartphones and iPads, and there’s an Aithre Connect app for monitoring trend data, plus there are audible Siri notifications that work with Bluetooth headsets. I think these are products with legs.

At its booth Aithre was showing both the $350 Altus O2 monitor and the $250 Shield eX avionics-integrated carbon monoxide detector displaying on an Advanced Flight Systems display. Using Bluetooth, the company said the sensors will also work with Garmin’s experimental version of the G3X Touch and Dynon’s SkyView. I think these are innovative and useful products that are worth a look. Visit the company at www.aithreaviation.com.