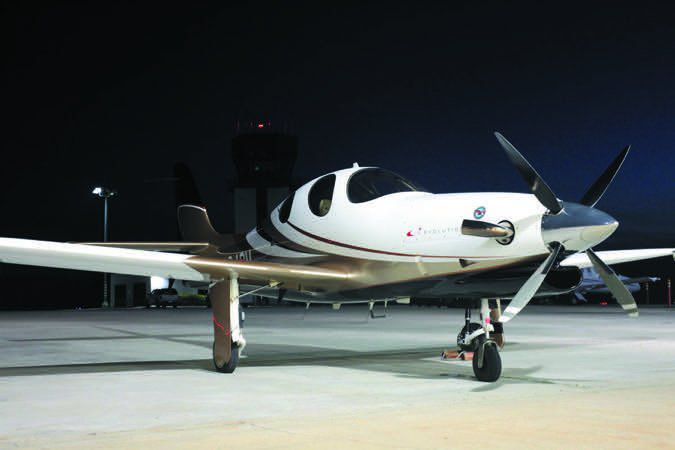 With some new flagship piston singles flirting with the $1 million mark, it’s logical that qualified buyers are eyeballing the entry-level turboprop single market. That could give Texas-based Evolution Aircraft (previously Lancair, before it was sold last summer) more opportunity to sell its Evolution Turboprop experimental airplane kits.

If you think the average new Cirrus, Cessna TTx or Mooney owner doesn’t have time to build an airplane, you may be right. But building an Evolution isn’t like building a typical homebuilt in the garage. Traditional homebuilders are the first to roll their eyes and say so. That’s because nearly all of the Evolution Turbine kits (there’s also the Evolution Piston kit) are built at an Evolution Aircraft-affiliated build center. Still, the choice may be sparking enough competition in the upper end of the Part 23 sales world that Evolution Aircraft expanded the product line, adding more variants of the Pratt & Whitney PT6A engine to the Turbine kit. The four-place flagship EVOT-850 has a 330-knot cruise speed. The completed kits I looked at had impressive fit and finish, were loaded with Garmin avionics and had luxurious interiors.

While hanging around the Mooney exhibit at Sun ‘n Fun last month without wearing my fake mustache, a reader flagged me down and politely asked if I’d take a walk with him to the Evolution Aircraft exhibit. “I have the money to buy a new Mooney, a new Cirrus or hand-build this Evolution turboprop; tell me why I shouldn’t consider the turboprop,” he said. I reminded him that turbines and pistons are apples and oranges for a lot of reasons. He figured with custom paint and interior work the price tag would approach $1.3 million.

This would be a business travel airplane to fly himself, his golf caddy and equipment to various stops on the U.S. PGA Tour. During the off-season, he reasoned, he could build (under professional supervision) the legally required 51 percent portion of the aircraft. Based on my rough calculations, the Tour’s off-season is only a few months. How the heck will he pull that off? According to Evolution, from the initial two-week building period at its facility, the first flight test usually comes in six months. If you don’t know a torque wrench from a rivet bucking bar (don’t fret, these are composite airplanes), the company assures buyers there’s enough professional help to get them through it.

Although on paper you build the “major” portion of the aircraft, which is defined as more than 50 percent of the fabrication and assembly tasks, the serious fabrication and some assembly is already completed. Major systems—including avionics, interior and paint work—aren’t governed by the FAA rules so you don’t have to do any of it. While advisory circular AC 20-27G covers the certification and operation of amateur-built aircraft, there’s little in the way of FAA oversight (it does issue the airworthiness certificate), although the circular says to notify your FSDO if you intend to use commercial assistance.

One of Evolution’s key selling points is that it follows FAA Part 23 regulations as guidance, but stresses that customization and modification is fair game—something that’s limited in the Part 23 world without expensive STCs. Speaking of STCs, there’s no FIKI (flight into known icing) certification since that’s a supplement to an aircraft’s type certificate—something an experimental doesn’t have. When the build is done and the 40-hour fly-off requirement is completed (you don’t have to be the first to fly the aircraft), the rules say the aircraft can’t be flown for charter, lease or rental. You need an instrument rating with high-performance and complex endorsements, plus a high-altitude training endorsement. The Evolution is restricted to FL280 because it doesn’t have RVSM certification.

If you aren’t ready to burn Jet A, the pressurized Lycoming-equipped Evolution Piston is the same aircraft from the firewall back. While experimentals generally aren’t a major portion of our coverage, we’ve had requests for a closer look at the growing Evolution line, so it’s on the list.