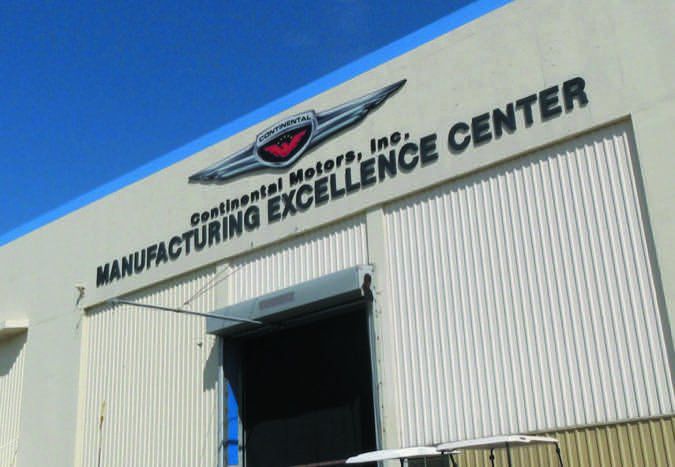 Touring either Lycoming’s factory in Williamsport or Continental’s in Mobile is like a stroll through time. Cheek by jowl with ancient hand-operated machine tools are modern CNC machining centers that would be at home in a Ford or GM plant. In late March, Continental revealed that it’s ready to scrap the old stuff for good.

In a surprise announcement, the company unveiled plans to build a new factory on fresh ground in Mobile, investing some $40 million in new machine tools and production processes that Continental hopes will improve efficiency and make it more competitive in what it sees as an increasingly global market.

Since robust growth in aviation is but a pipe dream, Continental’s overarching business plan is to gain market share from existing players and to eke out sales with new products whose development is paid for by money saved through more efficient production.

The Chinese state-owned company AVIC bought Continental from Teledyne in 2010 and has shown an acquisitive bent since. In 2013, it bought the bankrupt assets of German diesel maker Thielert Aircraft Engines and in 2015, it scooped up Danbury Aerospace/ECI, a major producer of PMA parts and the budding Titan engine line. Those purchases were in keeping with a business plan that expands the company’s reach without necessarily growing the overall market much.

The March announcement, envisioning some $70 million in total investment in Mobile, includes a new, clean-sheet factory, a revised global customer service network and an expanded presence in China with a design and engineering center aimed at expanding the Asian market.

In Mobile, $30 million will go into a new 225,000-square-foot factory to be built by an outside investor and leased by Continental. An additional $40 million will buy new, state-of-the-art production machinery better suited to the low-volume, high-mix product stream that both major engine manufacturers survive on.

Although Continental’s factory has its share of vintage machine tools, it has benefitted from incremental investments in new equipment, even when it was owned by Teledyne. But CEO Rhett Ross says the average age of equipment in the plant is 17 years and isn’t nearly flexible enough to handle the plant’s highly varied output.

“We’re going to consolidate our Mobile factory from 11 buildings, to two buildings. In doing this, we’re going to remove a lot of inefficiencies,” Ross told me when I toured the plant in March. “We’re going to bring in a lot of new manufacturing equipment based on heavy benchmarking that we’ve done at places like Harley Davidson, some of the big auto plants, Rotax even. We need to come into this century,” he adds.

That Continental’s parent, AVIC, is bullish on the investment return is obvious from the size of it. As industrial investments go, $40 million is relatively modest and is but a fraction of what a major aircraft certification project costs. But heretofore, investments in Continental and Lycoming have been on the order of a million here or a million there, with the occasional cash injection totaling up to $10 million over several years.

What’s unique about the March announcement is both the larger scale and short timeline. Continental says the factory will be producing things by 2018 and will be fully operational by 2019.

Despite the presence of some modern machining centers in the plant, there are huge production efficiency gains to be had, says Michael Skolnik, who overseas manufacturing operations in both Mobile and the company’s Germany-based diesel engine plant.

The signs of this are everywhere. Already in place in Mobile is a large automated machining center for crankcases. Before it was installed, Continental told customers they would have to wait for some parts until the company could justify machining the minimum number, which might be 50 units. “Now,” says Continental’s Mike Gifford, “the minimum is one.” That means it’s practical to fill a single order for a crankcase the company might not have in inventory. And following lean manufacturing principles, inventory is always kept to the bare minimum.

On the camshaft line, Skolnik showed me a part that once required nearly 12 hours of setup time but now requires under 10 minutes. Still, Skolnik says by automotive standards, the factory is not very flexible.

“With our business, we’re very low volume and very high mix. We have to be flexible. Our systems today are not very flexible, which adds a lot of waste, a lot of waiting and a lot of work in progress. That drives inventory costs. That goes away to a certain extent with flexible manufacturing,” says Skolnik. These days, flexible manufacturing often means five-axis machining centers that require fewer setup steps and deliver part cycle times two-thirds faster than with older three-axis equipment.

As part of its benchmarking, Continental looked at other engine and manufacturing plants, including cutting-edge factories like Rotax. With high volume, such factories have robotic assembly and fleets of autonomous guide vehicles that scurry around the plant delivering parts and picking up finished assemblies.

Chances are, you won’t see much of that at Continental. “We can go to automation at some level. It doesn’t always make sense due to our volume. We are investigating a couple of circumstances [for automation] not so much from the economic standpoint, but for safety and ergonomics,” Skolnik says. For example, some parts—crankcases and crankshafts—are heavy enough to benefit from being handled by machinery rather than raw muscle power. But there’s not enough volume to justify major investments in the sort of robotics that are routine in auto plants. It’s unlikely there ever will be.

And that gets us to the workforce. It will inevitably be smaller because when one machine replaces 20, fewer guys are required. Ross told us the local governments pitched in to help with the new factory development and in return, Continental has committed to maintaining a workforce in Mobile no smaller than 300. It’s currently at about 400. Moreover, that workforce will require skills the factory doesn’t currently have in abundance, so it’ll have to create them with a lot of retraining.

What’s It All For?

Any bean counter worthy of the name would look at general aviation sales across the board, consider a $40M investment and then ask: Why? What’s the possible return here? Ross has a ready answer. “The efficiency we gain out of this more than justifies the investment and it will help free up money that we will put back into the industry. We intend to accelerate our research and development for new products,” Ross says.

Given the history of innovation in the piston market, the outlook is not particularly encouraging, in my view. Ross said Continental would like to revisit the electronic ignition idea after its first foray, the Aerosance system that morphed into the PowerLink FADEC, found little traction in the market, despite significant investment. Technology has leapt forward in the nearly quarter century since that system was conceived.

Presumably, v2 of electronic ignition could be smaller, lighter and simpler. Cheaper? Not too likely.

Continental also plans to complete cert work on its CD300 six-cylinder diesel, yet another attempt to get a high-output Jet-A piston engine into the OEM mix. Continental’s last effort at this remains mired.

Recall that it bought technology rights to SMA’s four-cylinder SR305 engine in 2013 and soon rechristened it the CD200. Four years later, it still has no certified engine. Just as an illustration of how engine development timelines get telescoped, SMA brought the engine out in 1998. Nearly 20 years later, it has a certified engine, but no market presence worth considering. In 2012, Cessna said it would offer the engine in the 182, but four years later, the project remains undone, with an indeterminate time schedule. Continental doesn’t seem to be having much better luck; the SMA-based CD200 is still not certified.

The six-cylinder CD300 is undergoing cert work at the company’s St. Egidien, Germany, diesel manufacturing center. It’s always been assumed that a high-horsepower diesel would break the market open because it would be suitable for Cirrus-type aircraft. Continental is betting on that and it’s no coincidence, perhaps, that the engine is also being tested in an SR22.

Although Lycoming and Continental have competed directly only in the sense that they’ve vied for OEM business, Continental’s acquisition of the Titan product line from ECI may change that. The Titan line includes a significant catalog of PMA parts, but also the Titan Lycoming-style engine that’s finding some sales success in the light sport and experimental market.

Ross says Continental would like to certify this engine, opening up both OEM and conversion potential that could generate more sales. Furthermore, if Continental’s new manufacturing is as flexible as the company hopes, it could expand the PMA parts business considerably.

While this would increase competition, it also has a downside, which we heard about from engine shops. When Continental rejiggered its distribution through Aviall, shops complained about marginally higher prices. Ross said these weren’t instigated by Continental, but by Aviall. But shops still have to pay the higher prices, making them less competitive against factory overhauls and remans.

Also, if Continental grabs increasing share via overhauls, its parts manufacturing gives it strong competitive leverage, further stressing field shops struggling to compete. The fewer that survive, the fewer the choices for customers. As overall market activity declines, there’s likely to be more pressure on price escalation, not less.

Lycoming may also feel the heat, both in competition on parts and through certified engines similar to what they sell. The Titan line gives Continental much stronger presence in the four-cylinder segment, something it has always lacked.

Despite the potential for an unhealthy competitive environment in the long term, no one can reasonably expect Continental not to invest to gain both share and competitive advantage. Buyers may eventually lose something on price competition, but gain on new product choices, customer service and flexibility.