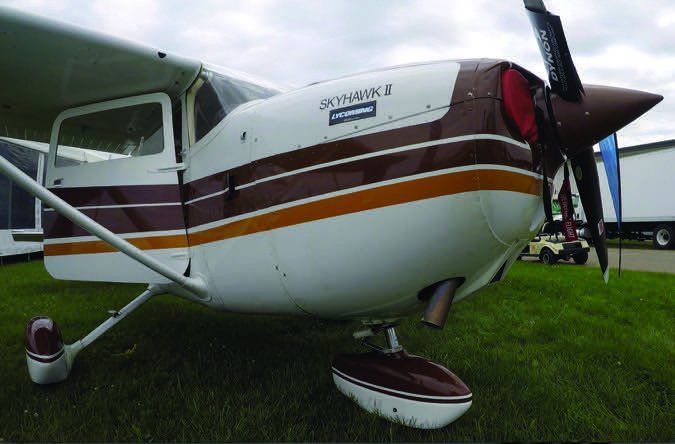 Amongst the bumper crop of avionics at AirVenture was the surprise announcement from Dynon that its heretofore experimental-only Skyview HDX glass suite will be available for certified aircraft. Dynon is launching an entire product line called Dynon Certified to support the equipment.

Not surprisingly, Dynon caught a lot of attention at the show with an installation in a Cessna 172 that ridded the panel of a pile of steam gauges—and a vacuum pump—in favor of a full-up glass panel suite that includes a PFD/MFD combination in a single screen, ADS-B In and Out, Dynon’s in-house autopilot and a full set of engine gauges.

As of early August, Dynon had announced the STCs, but said they didn’t expect approvals until later in the year, with installations following shortly thereafter.

Dynon’s Mike Schofield said the company considered the Skyview product a direct follow-on to its groundbreaking approvals for the D10A EFIS announced at Sun ‘n Fun 2016. Those approvals were part of a joint project with EAA called the Accessible Safety STC. Initially, these covered the Cessna 172 and Piper PA-28 line, but it was later expanded to cover most of the Cessna 100 and 200 series, the Piper PA-32 line and Beech and Mooney singles.

“The first two airplanes that will get STC’d are the Cessna 172 and the Beechcraft Baron and those two are the ones we’re doing all the engineering design work with,” Schofield said. “After that, we’ll be going for a broad AML and we still have a lot to learn on how to do that quickly and effectively,” he added.

However, along with EAA’s help, Dynon expanded the STC list for the D10A rapidly and Schofield said owners can rely on it as a template for what’s coming with the Skyview STC/AML project.

The Skyview HDX is Dynon’s latest iteration of glass originally developed for the experimental and light sport markets. The 10.32-inch (total width) display is designed to incorporate a full primary flight display and can be split to show a PFD on one side and a multi-function moving map on the other.

It’s mostly self-contained in a package that’s 3.1 inches deep, so fitting it into all but the tightest panels should be doable without heroic modifications to the panel, although dispensing with steam gauges will likely require a new subpanel, at least.

Screen resolution is 1280 by 800 pixels, according to Dynon’s spec sheet. The display has a 37-pin and 9-pin connector for main wiring harnesses and interfaces and also features USB connectors. It also has onboard wireless capability.

Early versions of the Dynon EFIS products were knob controlled, but as the systems evolved, Dynon developed a dual-control approach—both touchscreen and knobs for navigation and commands.

That means most functions can be done with either touch or knobs. That directly addresses user worries about using touchscreens in turbulence, where punching the right screen icon can be difficult and punching the wrong one can require stressful backtracking.

The HDX control set has two knobs at the lower corners of the bottom bezel with eight keys for various functions that change with context. These are labeled along the bottom edge of the display. While the HDX can be paired as two displays, it can also provide full function in just one.

As shown in the accompanying video, the typical configuration is likely to be a primary flight display on the left and a multi-function/moving map on the right. The PFD has the usual suspects, but it can also be configured to show virtual steam gauges rather than what has become the traditional HSI and tape view. The display is loaded with information, including true airspeed, density altitude, outside air temperature, wind and, lately, an angle-of-attack indicator.

The engine instruments, which will vary by aircraft, are placed along the bottom edge of the display and in addition to the required power instruments and temperatures, fuel quantity is also displayed. There’s also voltage and amp info and visual flap and trim-state indicators. A unique addition is a percentage-power indicator and a leaning function. That may be attractive to owners who have no or just basic engine monitoring equipment.

The autopilot is controlled through a virtual panel or a dedicated hard panel and offers altitude hold, vertical speed and altitude pre-select. A separate virtual subpanel controls the Mode-S transponder Dynon supplies for ADS-B Out.

All of these functions, by the way, are touch enabled, as is control and navigation around the moving map. (The knobs are handy for sub-selections in major functions, such as scrolling through comm frequencies or selecting weather reporting points.) The HDX offers the option of building flight plans in the MFD or in whatever navigator happens to be feeding it.

What may be the Skyview’s strongest selling point is that it’s a complete package that includes the display itself, plus Dynon’s autopilot servos controlled through the virtual panel or dedicated hardware. ADS-B In and Out are also included, using a 1090 remote transponder.

“We expect the package will vary, but what we have in the Cessna 172 is basically everything—the flight instruments, the engine instruments, ADS-B In and Out, the autopilot. What we do expect is that there will be people who have already done their ADS-B for 2020 or they have an engine monitor that they already like. And so just like homebuilders can, there will be different options that people will have,” Schofield told us during an interview at AirVenture. The package also includes a D10A EFIS to serve as a backup, thus eliminating the need for a vacuum pump or mechanical instrumentation.

While it has its own autopilot system, the HDX won’t offer support for third-party autopilots, at least initially. Nor will it provide an interface with digital comm radios. Dynon has its own comm radio suite; however, these aren’t approved for IFR.

Similarly, the HDX is equipped with an onboard GPS, but again, it’s not approved for IFR navigation, so installs will require a third-party navigator. Schofield said the HDX will integrate with Avidyne’s IFD series and Garmin’s GNS and GTN lines. Dynon’s radios may be approved for IFR in the future, Schofield said. Other interfaces may also be added. With current interfaces, the system can resolve HSI/CDI indications, show aircraft position on the moving map and display stored flight plans, including approaches with fixes depicted.

The installed cost of the certified Skyview HDX will vary by aircraft application because some owners won’t necessarily want or need all of the features offered. Schofield said the AirVenture Skyhawk test bed had a full package and amounted to about $16,000 in hardware. “We estimate that fully installed, the system will be in the low- to mid-20s price range,” he said.

Without the extensive marketing and support network that competitors like Garmin and Avidyne enjoy, Dynon says it’s considering taking on at least some installations itself, although that program hasn’t been developed yet. Schofield said the company will have more to say about it once the STCs are in place. For now, we’ll be watching for those. For a complete review of the Skyview architecture, see the October 2014 issue of Aviation Consumer. For more, see www.dynonavionics.com.

Click here to see a video review of the Skyview.