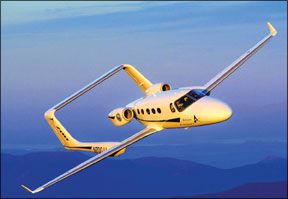 If youre a true believer in the VLJ revolution, your world got rocked in early February with the announcement that Adam Aircraft, a promising and early contender in the market, folded up. From the warm comfort of hindsight, Id like to say we told you so, but no such claim will be forthcoming. As much as its possible to predict these things, we thought Adams business plan was realistic, its funding

relatively assured and the aircraft-the 500 piston twin and the 700 twin jet-were good designs well-suited for the market. True, the piston twin market is iffy, but VLJ demand is supposed to be the great fertile ground of the 21st century.

So what happened? The same thing that happens to so many start-ups that venture into the scary world of aircraft certification. They simply ran out of money. Virtually everyone in the business of light aircraft manufacturing falls into the same trap, vastly underestimating the time and money necessary to bring a new certified airplane to market. The lucky or persistent ones survive, despite this.

One prediction I will make is that Adam wont be the last VLJ maker to collapse due to faulty assumptions. With its Mustang, a modest business plan and the giant Textron behind it, buyers wont have to worry much about Cessna. But Eclipse faces a challenging pair of curves as it attempts to make enough airplanes fast enough to generate some reasonable return on whats widely been assmed to be the better part of a billion-dollar investment.

Theres danger here for Piper and Cirrus, too, both of whom are toiling away on light jets theyre about to fly. The worry is not demand. If Piper can sell 50 Meridians a year, it can construct a profitable marketing plan to sell 50 or 75 jets. Cirrus has a nice pool of customers among SR20/22 owners looking to step up.

The acute risk is that certification will cost more and take longer than even the most skeptical spreadsheets allowed and the projects will reach a point of no return. Its a little like being upside down in a car or a house-you owe more than its worth. At some point, dumping more money into the program just to finish it simply means youll lose more on every sale. The fact that the VLJ market is probably already over served even ahead of it being developed only makes things worse.

Despite this, companies will continue to take these risks, and well they should, since thats the only way we get new airplanes. The bitterest price will be paid by investors in these companies-and they knew the risks, it can be argued-and the true believers who bought in early. The seven owners of Adam A500s are painful examples. Adam may find the money to re-capitalize and continue, but I think its a long shot, especially given the current weak economy.

VAN WEST ON THE CASE

Joining the Aviation Consumer masthead this month as managing editor is Jeff Van West, our valued colleague and editor of our sister publication, IFR. Jeff will be splitting editorial duties with me and shouldering some of the reporting and writing load. This will free me up to attend to other projects in our growing aviation division and elsewhere in Belvoir Media Group.

Im thrilled with the arrangement, frankly. The office gets a little lonely sometimes and itll be nice to have someone to bounce around ideas with, including why Paul Berge and I thought it would be a good idea to compare an Ercoupes crosswind handling to a dead cow thrown off a pickup truck. Van West assures me he would not have allowed this and now that Berge and I have atoned, hes coming into the chapel free of sin. That may not last long, but at least its a good start.