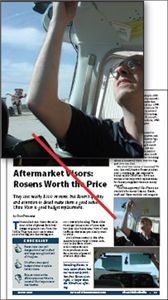 THE EUROPEANIZATION OF GA

A couple of summers ago, I was visiting the Diamond Aircraft factory at a lovely Austrian airport called Wiener-Neustadt, just south of Vienna. We were having lunch at an outdoor caf right near the parallel taxiway when I noticed something okee on its way to the runup pad raced by at what appeared to be near-Warp speed. I didnt think much of it at first, then I noticed another, then another, all of them taxiing fast enough to look like they were about to rotate. Not that I have a problem with fast taxiing, but I asked my lunch companions if this was normal behavior for Austrian pilots.

“Well,” one of them replied, “youve got to remember that avgas here costs $8.10 a gallon. We dont want to waste any of it on the ground.” Good point. After looking over the FAAs latest reauthorization for its own funding-better known as the Stamp Out General Aviation Act of 2007-I realize that were drifting closer to the European model of general aviation faster than most of us realize. Specifically, in Europe-and elsewhere-general aviation is heavily taxed with levies on fuel and defined user fees for services such as weather briefing, ATC handling and landing fees. If you think you hemorrhage cash when you fly in the U.S., try it in the U.K., France, Germany or Austria.

Despite all that, GA continues to exist in those countries, although not in a form most of us in the U.S. would consider especially appealing. Why governments have such a natural affinity for targeting GA for extinction is a great mystery for its hardly a golden goose. Tax it hard enough, and it will simply wither, yielding ever dwindling revenue. And thats where we are with the FAAs reauthorization fiasco, which seeks to increase the fuel tax and add specific user fees for certain services, as is now the case in Canada, where the idea has been a dismal failure.

If all this comes to pass, GA still wont die in the U.S., it will simply become Europeanized, available only to the very wealthy for any practical transportation value and the rest of the citizenry as an expensive, occasional hobby pursuit. Higher taxes and user fees will erode what modest growth were seeing in the industry. No one knows this better than the alphabet groups, especially AOPA. And thats why those entreaties youre hearing from the trade groups to actually sit down and fax your congressional representatives to protest the FAAs funding proposal ought to be heeded. This time, its serious.

ABOUT THAT THING ON LAST MONTHS COVER

Sharp-eyed readers of the March issue noticed something odd about the photo of the Garmin GNS 430/530 on the cover. Whats that funny little monster thingie peeking over the top edge? If you watched the Super Bowl and saw Garmins 30-

second commercial, youd know it was Maposaurus, the clever Godzilla-like creature that morphed from an out-of-control road map, only to be vanquished by Garmin Man, brandishing a ground navigation GPS. If you receive

Aviation Consumers monthly e-letter-its free, by the way-you would have been eligible to win one of those ground navigators by finding the other three Maposaurus images we buried in the issue. (David Yacono of Columbia, Maryland won the GPS, by the way.)

If this sounds like a cheap gimmick to get you to sign up for Aviation Consumers e-letter, well, thats exactly what it is. We have some more fun and games planned-so why not sign up? We wont spam you to death and the e-letter will alert you to important news in the world of GA. Just log on to Aviation Consumers site at www.aviationconsumer.com to sign up. Youll need the key code on your subscription label, but once youre in, the site is yours to peruse. The current issue appears a week before the paper version arrives in the mail and all of the latest Used Aircraft Guides are on the site in searchable format.