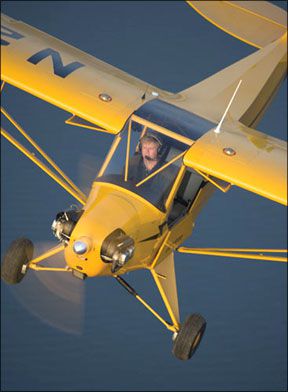 Any thinking person-I like to count myself in that group on four days out of seven-is bound to have eureka moments. You know the feeling; a fuzzy-edged world momentarily resolves into crystal clarity, if only fleetingly. I had one of these in April at Sun n Fun, when I came to the inescapable conclusion that Im a

dinosaur, a mud-hugging, pea-brained Jurassic throwback. This revelation emerged as I was trying to wake up my feet to keep from embarrassing myself in a crosswind while flying one of the Cub clone LSA airplanes reviewed on page 20 of this issue.

As the nose of one of these things swung toward the tulies, it suddenly occurred to me that everyone should learn to fly this way. This is hardly a new idea. The aviation press has published articles

ad nauseum about how great it is to learn to fly in a taildragger. Ive even edited a couple of them myself. But I never really believed it, simply because its just not practical. For one thing, gaining access to a taildragger suitable for training is difficult and insuring one for solo work is all but impossible. The (maybe) emerging light sport aircraft market may change that, with a small handful of designs that could make terrific trainers.

In 1969, my first solo was in a Cessna 150, but I learned to fly in a J-3 Cub, careening along the storied runway at College Park, Maryland. In getting acquainted with the new-age Cubs from American Legend and CubCrafters, the memories came rushing back. Flying Cubs is hard work and requires an understanding of control surfaces-especially the rudder-you simply dont need in order to plop a Cirrus onto a runway. As an accident cause, runway loss of control leads the list because of the sad fact that pilots often dont know how to land well and dont have feet trained deftly enough to keep an airplane on the runway in challenging wind.

A Cub wont tolerate that. If youre drifting sideways at touchdown and you dont correct it, youre going for a ride. The skills to avoid that are readily, if not easily, learned. And if you have mastered a Cub on a gusty day, you can fly anything better and with more confidence. If everyone learned to fly in Cubs or at least tailwheel airplanes, the runway accident rate might be better for it. In my view, thats a major plus for taildragger LSAs.

One thing I remain skeptical of, however, is the claim that training in LSAs will be inexpensive enough to expand the market. Many of these airplanes are in the $100,000-plus range and CubCrafters Clay Hammond told me that the companys airplanes are beginning to find slots on the training flightline renting for as much as $135 per hour, dual. Thats still $30 more than a typical Cessna 152 and although the LSA training syllabus requires only 20 hours of training, many in the industry seem to think thats unrealistic. I think theyre right. That doesnt mean the LSA market wont blossom, but as is so often the case in aviation, it wont be nearly as large as the dozens of companies flogging starter airplanes seem to think.

Further on the subject of prices and market size, why is it in aviation that when were faced with soft business conditions or a declining market, we raise prices? Its almost as if were trying to accelerate the erosion. This occurred to me while standing in the lunch line at Lakeland behind a family of four who spent $40 for chicken wraps and cokes, that on top of at least that much again in admission fees. Camping and parking fees further hammer the hapless show goer.

Cant these shows find vendors to give customers a better deal than that? And while Im carping, Id like to see Sun n Fun shorten this show by a day or two. The attendance appears to be in decline and Ive never heard so many vendor complaints about having to suffer through dead Monday. Enough already. Lets change with the times.

CubCrafters continues to expand the taildragger envelope with this sexy design they call the Carbon Cub. The Super Cub is the reference point, but thanks to some 40 carbon fiber parts, its 250 pounds lighter and has a 220-HP engine.