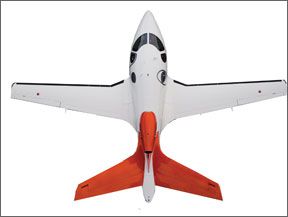 Like most aircraft manufacturers trying to build a community of customers, Eclipse Aviation sponsored an open house/homecoming event for Eclipse owners in May. The company used the event-cleverly called E-rrival-as a backdrop to announce that its officially taking orders for the Eclipse 400 single-engine concept jet that made for some interesting buzz at Oshkosh in 2007. At the same time, Eclipse CEO Vern Raburn wrote position holders still awaiting their Eclipse 500 twinjets that the

company was again raising the price of the airplane.

And the escalation was hardly nickels and dimes. Raburn told buyers-in-waiting that the 500s new price would be $2.15 million, up a whopping $450,000 or 25 percent over the last quoted price. Hard to believe that when this airplane was announced, it carried a price tag of $837,000-less than the cost of a Piper Mirage at the time. Of course, everyone knows how the game is played. Prospective owners buy early positions, help fund the development of the airplane and even if they dont accept it in so many words, they assume substantial risk. Buyers also know-or at least should know-that come-on prices will escalate. The risk is how much.

I doubt if many early buy-in customers expected escalations of two-and-a-half times the original offer. And my guess-my prediction, actually-is that Eclipse isnt done yet. If it hopes to survive in this market, my view is the price will have to settle out around $2.5 million, which is probably where it should have been in the first place. Pipers single-engine jet is at $2.2 million, the Cessna Mustang at $2.7 million and the Embraer Phenom 100 twin at $2.98 million. Both Cessna and Embraer are large companies and have the benefit of large scale economies and experience that Eclipse never had, despite the deep pockets of investors who have reportedly poured more than $1 billion into the airplanes development. Eclipses success was staked on high-volume, automotive-style production methods and a business plan that reckoned on thousands of orders. Eclipse claimed it had the latter, but the former has proven elusive. Eight years ago, the wags in Wichita tut-tutted that Eclipse wouldnt find it so easy to ramp up production to profitable levels. They turned out to be right and Raburn admitted as much at E-rrival.

So now owners with deposits in place face a decision. They have until August 31st to take a refund on their deposit or send another check for $450,000. For those who choose to bail, Raburn encouraged them to consider a position in the $1.35 million 400 model. But I suspect many owners are thinking what Im thinking: That ones under-priced too, so what seems like a good deal now will probably escalate later. Some Eclipse owners will probably gravitate toward Piper, Embraer and even Cirrus, which has proven itself capable of realistic timelines for sophisticated products. In fact, the new Perspective analyzed in this issue has the cockpit Eclipse 500 drivers wished they had.

Im some Eclipse position holders will also wonder about the wisdom of launching another developmental project when the Eclipse 500 isnt exactly finished. The airplane still lacks known icing approval and the sophisticated, super-integrated Avio avionics package isnt ready, either. With each delivery of a new airplane, Eclipses long list of IOUs grows longer.

On the plus side, owners report that the Eclipse 500 is a terrific flying airplane and although its range is stunted from the original claims, the airframe has thus far proven economical and maintainable, with excellent factory support. DayJets Ed Iacobucci told me last summer that the Eclipse had to prove it could be profitable flying with just one seat filled. Hes satisfied that it has done that. So the challenge for Eclipse is to get the money in order. And quickly. As theyve been saying in Wichita since Eclipse burst onto the scene 10 years ago, thats not going to be easy. Sharp price increases at least represent the will to do that. Buyers might not like it, but a profitable company is in their interest.