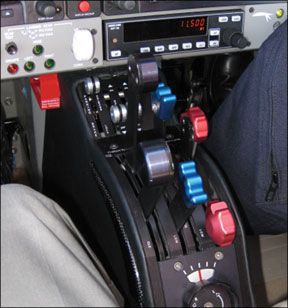 As this issue ships off to the printer, Im just back from London, Ontario where I test flew Diamonds new Lycoming-powered L360. It went just as I expected it would-the airplane flew well, performed as the company said it would and I landed it without breaking it. I had flown the proof-of-concept version of this airplane in Austria four years ago when Diamond was deciding whether to proceed with diesels or the gasoline engines, or both.

The company did what the market told them to: They dropped the Lycoming version and steamed full ahead with the diesel version, then powered by the Thielert 1.7 Centurion engines. Given that the Thielert engines turned out to be a maintenance nightmare, did Diamond jump the gun on diesels and make the wrong decision? Heres why I think they did not.

Although Diamond has inarguably proved that theres market interest in diesel engines, what it has not yet proved is whether diesels are up to the task. But that process had to start somewhere or otherwise, as Dick Rutan once colorfully said, we would still be traveling cross country peering at the hindquarters of oxen. Despite the withering setback that the Thielert fiasco represents, Diamond is still way out in front of everyone else and it has more meaningful diesel experience than any airplane manufacturer on the planet.

The tuition for that education came at a high price-millions in lost sales and prestige and no small number of customers who are angry and believe Diamond could have avoided the mess with Thielert by additional testing and a slower introduction of diesels. But it doesnt work that way. A certification project is costly in time and money and it has to proceed apace in order for the company to begin selling actual product to push cash flow back into the right direction. The slow leak method-even for potentially risky technology-sounds good, but its impractical.

One debating point in how Diamond responded to the crisis is to simply insist they buy back all the faulty diesel airplanes. Thats a nice, stand-up idea if ever Ive heard one. It would have been the right thing to do. Its also a pipe dream. If Diamond did that, theyd have bankrupted the company, which would have benefitted no one, least of all Diamond owners. The second best thing is to offer owners an at-cost upgrade or conversion of Thielert diesels to either the Lycoming IO-360s reviewed in this issue or the Austro diesel, just recently certified in Europe.

I fully understand that some owners will think this isnt a good enough deal, but I disagree. Its a realistic, reasonable response to an unprecedented vendor failure. In the fullness of time, we may find out if Thielert pulled the wool over Diamonds eyes or whether Diamond just didnt do its diligence with regard to Thielerts promises. Whether the former or the latter, Diamond wasnt alone. By dint of sheer timing luck, Cessna vaulted the shark as maintenance issues were coming to the surface just as it was certifying the diesel 172 in late 2007. That project is on hold, if not abandoned entirely.

I sat in a conference room in Thielerts Lichtenstein, Germany headquarters in 2005 and had a marketing guy whiteboard the engine economics for me. I couldnt for the life of me understand how the numbers were going to add up and continually questioning it got nowhere. Eventually, I concluded that Thielert was doing a loss leader strategy-they knew they would lose money on the engines initially, but accepted that as a means of establishing and building a market which would eventually turn profitable. Either that, or it was three-card Monte from the start.

After I got back from London, I was even more convinced than ever that Diamond was and is on the right track. The Lycoming L360 performs well and will be an excellent trainer. But as soon as I confronted that panel full of levers and started hunting MAP, RPM and fuel flow on the G1000, I thought…ya know, I really prefer the diesels single lever. Its just a lot easier.

I may be a dinosaur, but Ive got a Mac, an iPod and a Twitter account. And I guess that makes me a single-lever guy, too. -Paul Bertorelli