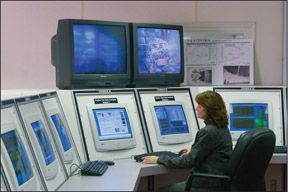 AN INSIDE LOOK AT TCM

The photo on this page merits an explanation. It might look like just another snapshot of a Flight Service Station or an ATC facility, but it was taken where you might least expect it: inside the Teledyne Continental Motors engine plant at Mobile, Alabama.

Why should that be a surprise? Because anyone who has toured either of the major aircraft engine plants will tell you that they are-or at least have been- behind the curve of industrial modernization. While auto plants-especially engine plants-have for years relied on computer numerical machinery and statistically based quality control, the aircraft engine plants have clung to the old technology of one man, one machine, one part at a time.

Because we see the inside of both the Lycoming and Continental factories so rarely-both companies are reluctant participants in the routine monthly news cycle-evolutionary changes in those factories tend to get by us. I was last at TCMs plant about five years ago, but in early June, along with a small group of aviation journalists, I got a good look at recent improvements at the plant.

Although such press tours tend to be an inch deep and a mile wide, the changes at TCM look to be profound.

In some departments, a dozen manually operated machines have been replaced by a mere handful of sophisticated CNC equipment. Further, much of that equipment is now tied into a plant-wide computer monitored oversight system. The photo here shows the plants central control room, where megabytes of data flow into a system designed to automatically analyze the river of data for any quality anomalies.

An example? When cylinder heads are mated to barrels, the machine that does the torqueing automatically records the values and sends its data to the control room for storage and potential analysis. Even the torqueing of rod bolts-which still has to be done by a guy with a wrench-is done with an electronic wrench that records and stores the values.

This kind of electronic overwatching isnt quite applied to every operation at Mobile, but its getting close. What that means for owners is that quality control on parts-everything from valve springs to crankshafts to entire engines-should be on a continual upswing. Its too soon to know how all this will play out in the field in fewer crumped parts and warranty claims. Compared to the automotive industry, the aircraft supply chain moves at a glacial pace and so does customer perception.

But one thing seems clear: despite owner brickbats-and a few from us, too-TCM appears to be moving forthrightly forward with state-of-the-art manufacturing and quality control. I cant see that as anything but good news for owners and the industry.

Every time I use a self-serve fuel pump to fill the Mooney, I am reminded of that old Pogo cartoon: We have met the enemy and he is us. Why is it that most of these self-serve pumps are in a sorry state of repair? The hose reel is broken, the ground wire is trashed…its always something.

Part of the problem is that the equipment isnt well designed or well made and some FBOs let the maintenance slide. But the larger reason is that pilots just abuse the fueling apparatus. When I see the ground wire stripped of its clip, I know its because some bozo just let go of it when it was rewinding, with predictable results. A little common sense and courtesy could prevent that.