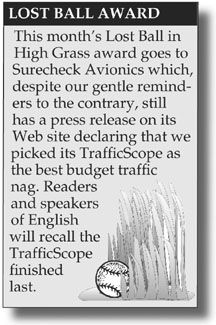 Web Wars
Some years ago, my editorial predecessor, the late Dick Weeghman and I shared a good laugh over what can best be described as conditional perception. Being in the business of reviewing aviation products and picking winners and losers, we noticed a certain pattern in the way companies react to our product reviews when quoting the magazine in advertisements.

This is perfectly predictable but still amusing, at least to us. If we happened to like the product in question, the companys ad would describe Aviation Consumer as the respected, independent voice in general aviation. You could almost hear the brass fanfare in the background. The gravitas could be stifling.

If we found the product wanting, we were more likely to be described as those self-important, ill-informed morons at Aviation Consumer. Of course, that wouldnt appear in the ad but would be the corner post in the whisper campaign some companies would launch to impeach the witness.

Now theres a more efficient means of touting a positive review or attempting to discredit one thats not quite so glowing: the companys Web site. Increasingly, we find that companies plead ignorance of copyright law and reproduce entire product reviews on their Web sites, sometimes edited to delete favorable references to competitors.

Occasionally, we see Web sites that use a positive comment in Aviation Consumer to distort the overall findings of the article, as with Sure Check Aviation, who we are, accordingly, awarding our first Lost Ball in High Grass commendation.

When were aware of these abuses, we address them with the manufacturers but be forewarned: some of what you read on Web sites about Aviation Consumer reviews may be distorted and taken out of context. Caveat lector. (Over to you, Jason.)

Bias?
A related issue is bias in our reviews. And here, I must confess. Our reviews are, without question, biased. Theyre biased toward the best products that deliver the most performance for the least money, according to the review criteria plainly stated in each article. A while ago, a reader e-mailed to complain that we always picked Garmin products and we were therefore biased in favor of Garmin. Just because Garmin sold more GPS than anyone else, doesnt mean their products are good, he argued.

Pausing ever so briefly to maneuver around the flaming wreckage of that non sequitur, I respectfully wondered how he figured Garmin came to own the avionics market. Really clever advertising? Rebate offers, maybe? Also, I seem to recall they have one or two repeat customers.

The point is, if a product is good and a good value, itll attract a lot of buyers. Well say as much, regardless of who owns the company, what marketshare they have or how many times we picked that companys products in the past. And well bend over backwards to be fair and accurate about it.

In the end, thats what you, as readers, pay us to do. If we drift wide of the mark-which we occasionally have-Im sure youll let us know. Believe me, I wouldnt want it any other way.