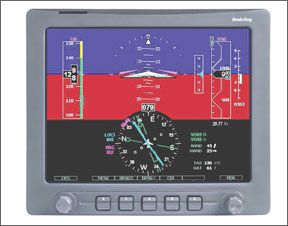 YAWNING OUR WAY THROUGH EFIS

Normally, about three days into non-stop AirVenture coverage at Oshkosh, I have a world-class case of the thousand-yard stare. If Im lucky, the vague rivulets of spittle in the corners of my mouth dont run onto my shirt. This year, there was

more new stuff, more airplanes, more vendors and more self-important media pukes running around with notebooks, cameras and recorders than I can ever remember. As Martha Stewart used to say before she taught the girls in C-block to make festive place settings out of prison shivs, its a good thing.

Well, maybe its not

all good. I hit the wall between Aspens and Bendix/Kings booth. After looking at both of their new EFIS offerings, I was suddenly seized by the realization that what we have here is a failure of imagination in designing displays. Five years into glass cockpits as standard fare in new airplanes, were still looking at displays that mimic the look of steam gauges. If I never see another electronic AI projected on a blue and brown background, I wont feel deprived. Garmins G1000, Avidynes Entegra and the new stuff from Bendix/King and Aspen (see page 14 of this issue) are solid, competent and well-designed products. And their displays are just boring as hell. I submit that its time to rethink the basic EFIS

idea and use the technology to its fullest advantage.

But then Chelton has already done that. A walk through their booth was a cool breeze on a stifling day. Cheltons military-inspired FlightLogic display with vector lines, HITS boxes and 3-D traffic and terrain is so utterly superior to everything else that I cant for the life of me understand why no one else has picked it up as we graduate to second-gen boxes. Probably its due to industrial inertia. If a 95 percent solution sells, why go the extra effort for that last 5 percent? Further, not enough would-be buyers have compared displays. Like sheep, theyre just thrilled to have any glass at all. Its too bad, really. Life behind an EFIS could be so much more interesting than it is now.

LSA: SURE LOOKS LIKE A BUYING FRENZY FROM HERE

“Hey, youll never guess what I just did,” said a friend of mine at OSH who works for an avionics company. “I just put down a $5000 deposit on a Skycatcher.” Out of politeness, I pretended to be excited, but when two other people I know told me the same thing, I realized Id stumbled into a genuine groundswell.

I wouldnt have necessarily predicted this, but then being skeptical of airplane marketing claims is coded into my DNA. I now freely admit it: Theres clearly demand out there for LSAs and bully for Cessna for knowing it. But if this buying frenzy has legs and isnt just typical Oshkosh euphoria, Cessna may want to rethink its two-year delivery schedule. A lot can happen in 24 months and its hardly unthinkable that Cessnas instant dominance could be eroded, especially by Cirrus, if not by a cloud of little plastic airplanes from Eastern Europe. So how about it, Jack Pelton? Lets light this candle and get LSA seriously underway.

As airplane companies go, Diamond is bipolar. On the one hand, it developed the gas-sipping DA20 and the remarkably well-conceived DA42 diesel-powered TwinStar, an economy standout. On the other, it rolled out the 550-powered DA50 SuperStar which, despite FADEC, will probably do a nice job of load testing an owners VISA card as $5 avgas becomes commonplace. I would expect to see a diesel offering for the DA50 sooner if not later.

Theres a sea change afoot in sensitivity to fuel costs. George Braly-who sells GAMIjector calibrated fuel nozzles-told me that when GAMI started marketing the injectors some 12 years ago, buyer motivation was just a better running engine. At OSH, he said buyers are now mentioning the cost of fuel as the primary motivator and theyd like to save more of it by running lean of peak.

In my view, thats the sharp end of the wedge the airplane makers have been worrying about. Even well-to-do owners have a cost/value threshold for the price of a gallon of gas. The OEMs wont be able to ignore that. Expect fuel efficiency to have a higher profile at next years AirVenture.