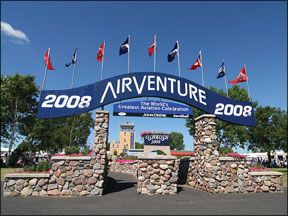 OSH 2008: No Shortage of Bullishness

In the busy run-up to OSH, we routinely get snowed under by pre-show press releases, so this year, we wised up and began covering the show a week before it started. I produced a bucket of podcasts for our sister publication, www.avweb.com and during these interviews, one question came up repeatedly: What are you hearing? Implicit in this query are two others: Is GA about to crump

because of high gas prices and the soft economy and will show attendance evaporate as a result? Going into the show I didnt think that would be the case and it wasnt. EAA now reports that attendance was only slightly below the 2007 gate and the number of international attendees actually showed a healthy increase.

Not that the show started out all that auspiciously. True to form, Eclipse Aviation had to be first in line, but at its media breakfast at 8 a.m. Monday we witnessed the bizarre public beheading of Vern Raburn. It was enough to put you off your toast and marmalade. Although Raburn said he was “leaving” Eclipse, it was later made known that investors standing by to pour yet more money into Eclipse made Raburns departure a condition of the deal.

It wasnt surprising that Raburn was shown the door, but the venue and timing struck us all as odd. No matter when it got done, it would have gotten press and the statement would have been loud and clear. But if Eclipses new minders wanted an upbeat new beginning, what they gave us was more like a dirge. For his part, Raburn sounded philosophical noting, rightly, that he joins a crowded corps of visionary entrepreneurs driven out of the companies they created by market realities.

So we popped a few Rolaids and dashed off to the Lycoming booth, where the news definitely was upbeat, albeit a bit shy of visionary. But Lycomings announcements-detailed on page 24 of this issue-encapsulate what I like about Oshkosh and what I admire about companies that refuse to be ground down by discouraging market conditions. Make no mistake, Lycomings new engine initiatives are far from trivial. They represent considerable investment and, given the dismal record of new powerplants, genuine risk of both market rejection and overlooked technical or manufacturing flaws that are embarrassing and expensive. Lycoming is itself digging out from its crankshaft quality fiasco of 2004 and if our reader surveys are accurate, the company has made substantial progress. Maybe re-invention is a little strong, but it comes to mind.

Lycoming also recognized that it can no longer maintain its reputation as the staid, gray-paint factory where nothing new ever happens. Even in a tender market, innovation is a necessary part of success and I think Lycoming deserves a tip of the hat for stepping up. Well see how their proposed new engines fare in the real world, but the company is on the move.

Two other bold strokes came from Diamond Aircraft and, of all sources, Rolls Royce. Staring into the teeth of a disaster with the Thielert diesel meltdown, Diamond is moving full-steam ahead with its Austro diesel project, which is rather like flooring it as the rear end starts to break loose on a rain-soaked curve and counting on the traction control to kick in. Not that Diamond has much of a choice. And here comes Rolls with the powerplant weve all been talking about for years: t he small, lightweight turboprop with fuel specifics approaching a piston engine. Mooney signed on as a potential airframer. These are not the actions of people cowering in their corner offices dithering over the cost of gas.

So, what the hell…full speed ahead. Im happy to go along for the ride.