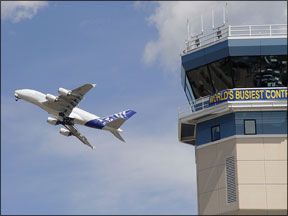 Returning home after covering AirVenture in Oshkosh is a little like being released from the intensive care unit. I know why I was there and Im glad I was, but sometimes Im not so sure I want to go back. Thats not a comment on the show itself, but on the intensity of covering it in a world that has become accustomed to

a digital river of information which we struggle to fill. These days, theres not much time to ruminate on the meaning of it all.

And when I do find the time to think about and put into a larger context the things I see and hear at a show, Im not always encouraged. One trend thats cause for concern is whats going on in the engine and OEM market. Its a repeat of the early 1980s, only maybe worse this time around. When aircraft sales tanked in 1978 and 1979 and remained anemic through the early 1980s, Lycoming and Continental did the logical thing: They began competing with engine shops providing field overhaul services. Both companies have been building that business steadily ever since. As does anyone who believes in free enterprise, I embrace the notion that competition is a good thing in a free market.

But that doesnt always mean that customers benefit in the longer term When Lycoming and Continental entered the overhaul field, they did so from a stance of dealing with customers who were airframe builders, not end users. These represent fundamentally different kinds of relationships and the fact that we constantly hear complaints about Lycoming and Continental for lack of response to customer queries, especially warranty claims, suggests that neither company has really figured out end-user customer service just yet.

This has given field shops a small but important niche in which to compete. Since they are at a fundamental disadvantage against the factorys economy of scale, field shops have to do better where they can, at face-to-face customer relationships. If youre a Charlie Melot (Zephyr), a Bill Middlebrook (Penn Yan) or an Allen Weiss (Certified), making warranty or service after the sale difficult is the last thing you want to do. So shops like these do the reverse and earn deep customer loyalty as a result.

Now, as we enter the second round of cannibalism in a declining market, the factories will inevitably seek to replace lost OEM sales with more overhaul and direct-to-the-customer business. When this happened in the 1980s, many field shops folded under the intense competition and I fear that many more will fold as this trend intensifies. Ultimately, this promises a somewhat bleak landscape of two engine factories and a handful of major field shops in geographically diverse locations. Field shops do best on warranty performance if the customer is within an hour or two of flight time from the shop.

In defense of both Lycoming and Continental, both seem to have improved their direct dealings with customers, especially Lycoming. On the other hand, Continentals decision not to warrant certain items on the Cirrus TN airplanes represents a poor showing, in my view. It doesnt fill me with the warm fuzzies.

Recall that the Cirrus turbonormalizer is provided under STC by Tornado Alley Turbo. Tornado Alley warrants all the turbo hardware, but Continental has declined to warrant combustion-related components elsewhere on the engine, forcing Cirrus to step up itself. The right thing to do would have been for Continental to work out a specific deal to support customers across the board, rather than leaving it up to Cirrus to carry this load. My worry is that as the engine companies gain more market share, youll continue to see these kinds of policies which are, in my estimation, customer unfriendly. Thats the last thing we need in this industry right now.