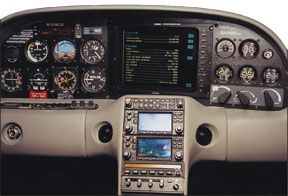 Building the Walls by Stealing the Foundation

Not that long ago, I was introducing some folks from Cirrus Design to the Maine delicacy known as the lobster roll, having just finished a flight in their new Cirrus SR22 Perspective. We were talking about growth of our industry called general aviation and how niche projects usually work and grand visions almost always crash and burn.

Ive flown most iterations of the Cirrus from the vacuum-system SR20 through the SR22 Perspective. An SR20 in 1999 was billed as Lexus quality, but it had the fit and finish of a 1979 Toyota Corolla. Those days are long gone and the Perspective is every bit a Lexus.

The thing is: Whos buying these things and will they keep doing so? The SR22 is a capable machine, but starting at $590,900, with another $70K in options, its an exclusive club even within a niche. A clue came from a friend of mine who just flew the Perspective and is likely to buy one-just as soon as he can sell his MU-2. A Mitsubishi MU-2 to a Cirrus is a big step down, especially considering his usual trip is more than 1000 miles. But the savings in fuel, insurance and training make it worth the hit for him.

After the folks from Cirrus were fed and on their way, I ran some numbers. The price of that Corolla-quality SR20 back in 1999 was $179,400. Using the ol inflation calculator, $179,400 in 1999 would be about $225,000 today. The base price of a new SR20 is about $276,000. Considering how much more airplane it is than those early models, those numbers make sense and are probably part of the reason Cirrus is still is business.

Running the inflation calculator backwards, that 2008 Cirrus Perspective would have cost around $470,000 in 1999. Was there a market for 700-plus half-million-dollar piston singles back then? I dont think so, but Im not sure how much is an expanded market. Some of these new Cirrus pilots are simply the ones who would have moved up through training aircraft and ended up in a Mooney or a Cessna 310. Now theyve been siphoned off to a Cirrus (or a Cessna/Columbia or a Diamond). Others, however, are folks who would have been turned off to flight training in 1999 because they were uninterested in flying a Corolla when they drove a Lexus. Today they can buy the airplane that they want. Kudos to Cirrus for seeing that niche and gravitating to it.

But it raises the question: If those buyers were fickle enough about flying to walk away in 1999 because they couldnt get a wood-grain interior in their first airplane, how likely are they to hang around or buy new today when the costs are up and free time is down across the board? And how dependent is a company like Cirrus on sales at that top end?

Cirrus says the vast majority of the orders are for loaded SR22s. In fact, just before the Perspective came out, they ran the production line with just SR20s because they didnt want to build a bunch of airplanes for buyers who would upgrade their order to a Perspective-at a cost of $50,000 before adding options. (Cirrus now has a bunch of new SR20s in storage, in case youre wondering.) Im seeing the same thing in the LSA market with new models regularly selling fully loaded and north of $125,000. Im curious if the thick section of the order book is at the top of the line in small jet sales, too.

If all thats true, then this may be a bubble waiting to burst, as new buyers in GA sector A are also sellers in GA sector B-whether theyre trading down or up-and the fickle buyers attracted by the smell of new decide they have other places theyd best put their cash over the next few years.

Because when were talking about a niche market, a few hundred people heading for their yacht instead of their airplane when they finish their lobster roll makes all the difference.