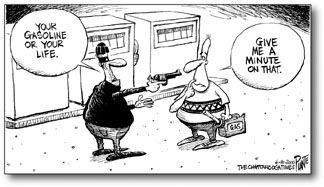 Over-the-Top Fuel Prices
If anything good for general aviation emerges from the massive twin disaster of Hurricanes Katrina and Rita, it may be high gas prices. You read that right. Sustained gas prices of over $3 a gallon may finally shock U.S. drivers and the auto industry into doing that which should have been done a decade ago: Insisting upon and forcing higher fleet mileage standards for cars and trucks. As gas prices recede from the royal gouging the oil companies gave us in early September, consider $3 gas a relatively harmless shot across the bow.

The U.S. leads the world in transportation fuel inefficiency and since the government has shown no interest in a cogent energy policy to achieve better efficiency, its generally assumed that a market-based solution is our only salvation. But to become viable, market-based solutions require a threshold of pain that will cause enough consumers to demand more efficient vehicles. If the wail is loud enough, the industry will provide the products. They certainly arent doing that now. Hybrids have made inroads but more practical diesel-powered cars, while widely available in Europe, are all but unobtainable in the U.S. Further, alternative fuels arent likely to emerge at the historical gas prices weve enjoyed for so long.

If the pain threshold resides somewhere between $3 and $4 for road fuel and prices stay there, the glut of SUVs and heavy cars choking the highways will give way to more efficient solutions. Then, just as it did following the 1974 OPEC oil crisis during which drivers were panicked by gas lines, overall U.S. crude oil demand could level out and even decline-sharply.

No one really knows if the economy can shrug off $4 gas but its a certainty that $6 gas over the short term would be a disaster. Given the intense demand, growing worries about production levels around the world and the tender state of the petroleum distribution network, its lunacy to think economy-wrecking fuel prices arent a possibility. As noted in this months report on saving avgas, no other factor more threatens the growth if not the very existence of general aviation than sharply higher fuel prices.

And burning more fuel in your airplane rather than less doesnt help, thus, in this issue, were offering tips on how to fly more efficiently. Sure, you can continue to bore along at 15 gallons per hour, but if there are more efficient options, why would you want to? When we reach the mindset in this country that fuel efficiency is not just a good thing but a moral imperative, well be well on the way to more stable, albeit slowly rising, fuel prices. But in the end, how we fly-maybe even if we fly-is inextricably linked to what we drive. For many of us, thats the place to start.

Aviation Consumers New Look
Yes, it includes color, which I hope was vividly obvious from the moment this months issue arrived in your mailbox. A tip of the editorial hat goes to Judi Crouse, our in-house art director, who oversaw the new look. Why color? Why now? Traditionally, magazines have been published in color to satisfy advertisers, but since we dont have any of those, the real driver for adding color to our pages is simply to improve the product for what does drive the magazine: reader benefit.

While air-to-air glamour shots of new airplanes have never been our forte, theres no question that adding color improves the look and readability of what we do best: detailed product evaluations and spec charts comparing the products and services that we know our readers are interested in.

Aviation Consumer has always been about value for readers and since color is more affordable now than it once was and with more of our content becoming available online, where color is the standard, making the switch made perfect sense. It was simply time. We hope you enjoy the new look.