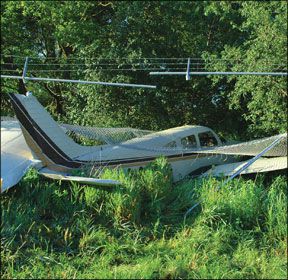 To the sheltered masses, the words “safety” and “skydiving” might not seem to belong in the same sentence, but skydivers are the ultimate self-preservationists. You dont get to try it again if you get the first jump wrong. (Please spare me the utterly original clever comment involving perfectly good airplanes.)

There are a handful of technological aids that help in trimming the risk, such as audible altimeters and a gadget generically known as an automatic deployment

device. All it does is deploy your reserve parachute for you if you forget to do it yourself, youre injured or otherwise incapacitated. These devices cost about $1200 and I have always used one in my skydiving, while a friend of mine never has. He says its irrational to spend that much money to mitigate a tiny slice of risk. Hes right. Heres why.

The big number crunch reveals that in a given year, very few skydivers are incapacitated to the point that they cant deploy their own parachutes. Its a rarity. Further, gadgets like these always introduce the risk of working when you dont want them to-say youre standing in the door of the airplane or someone is immediately above you in freefall. The last thing you want is to stuff a bunch of nylon into someones face.

Where Im going with this is that theres a direct corollary with the 406 MHz ELTs were reporting on in this issue and to ELTs in general. Same logic. For the 406 ELTs, youll be paying at least $1000 and possibly quite a bit more. (Its not at all clear that paying more increases your odds of survival in any measurable way.)

And what risk are you mitigating? Primarily the one associated with crashing in some remote area where no one could otherwise find you without the ELT. To be sure, this happens and a few times a year, an ELT proves determinative in the survival outcome. But “a few times” is that small slice of risk thats directly parallel to the skydiver paying more than a grand to cover that rare eventuality in which he (or she) becomes too incapacitated to deploy a parachute manually.

What Im describing is what I have sometimes called between-the-ears comfort or, if you wish, perceived safety. No argument that both of these devices improve the likelihood of survival in certain, but certainly not all, circumstances. The overall odds of surviving without one may not be measurably different than not having one.

This is not an argument against safety devices in general or ELTs specifically. Personally, just as I use a deployment device in skydiving, Id go for the ELT for the airplane, too. The argument that you never have too much safety gear gets into the motherhood and lapel flag pin arena where rationality is overtaken by emotionalism. But, as it always does, money enters into the equation. As flying becomes ever more expensive and many of us are now doing less of it, Id be the last guy to say you have to have a 406 ELT no matter what it costs. While its true youd probably pay a years salary for it after the crash, its also true that if you put a sharp pencil on the analysis before the crash, the risk/value relationship is not so utterly clear cut.

So if youre on the fence about a new 406 ELT and worrying that youre being recklessly irrational in not buying one, youre not. Any safety-related device entails a calculated risk. And you can do the calculations any way you like.