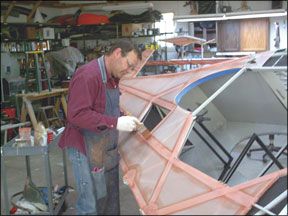 Anyone who makes anything in the aviation business-maybe thats everyone, actually-complains about FAA oversight and regulation. Most of these complaints dont question the need for regulation, just its execution-FAA foot dragging, ridiculous paper shuffling and inconsistent standards from one office to the next. I

have, at times, adopted a more radical view that would allow the free market to regulate general aviation entirely, with little or no FAA intervention. I will be the first to concede that my enthusiasm for Adam Smiths invisible hand has been somewhat diminished by the fact that my retirement savings have declined by 30 percent, thanks to a lack of adult supervision in the banking industry. But I digress in a way which could lead to bitterness and recrimination and, well, who needs that?

The great test of my radical theory is actually underway in the aviation business. The blooming-or should I say stumbling?-LSA segment is about as close to unregulated aviation as we are ever likely to get, with the exception of experimental aircraft. But even though the experimental world defines innovation, you cant buy them off the shelf, as with LSAs.

There are several tests the LSA industry needs to pass. One, it has to prove theres really a sustainable market there, the long-term players have to survive the inevitable shakeout and the airplanes have to demonstrate reasonable durability.

Thats what were addressing in this issue-the entire idea of basic sustainability of LSAs. The problem is bifurcated. Some new LSAs are constructed almost entirely of purpose-built parts from the original manufacturer, so if you crack a wingtip fairing, theres only one place to get it. Volume in the LSA market too low to support any meaningful aftermarket parts sources. Some new LSAs are built largely of off-the-shelf components from sources like Aircraft Spruce, so for these airplanes, long-term support is less worrisome, if not a lead-pipe cinch.

Then there are the legacy LSAs-the Champs, the Cubs, Luscombes, Taylorcraft and others. These airplanes are as old as dirt and continue to be supportable thanks to aftermarket support and owner groups. Generally, we dont hear widespread complaints about support issues, but Taylorcraft owners are struggling a little with some parts. What this means for the would-be LSA buyer is that the number one question you have to ask yourself is, what am I buying and what is the likelihood of it being supportable one year from now, much less five years from now.

For the legacy airplanes, the answer is obvious. But for new LSAs, this is a giant black hole. Im pretty sure there are owners signing checks for airplanes right now that will be 1000-pound paperweights a lot sooner than the buyers figure. Im just not quite sure which airplanes these are, to be honest. When we cover the industry, we ask companies about their business plans, their financials and their volume. Some are just too disorganized to fashion an answer, some respond with the standard pie-in-the-sky wave of the aviation hand and others, Im convinced, just lie.

Having said all this, if long-term supportability is your wont-and theres no reason it shouldnt be-most legacy LSAs are a sound bet. But shop around before buying, especially by contacting owner groups. As for new LSAs, it seems to me the companies doing the largest volume are the likely survivors. But theres no guarantee thats the case. We just dont have any other metrics by which to judge these companies. Caveat emptor has never been more true than now.