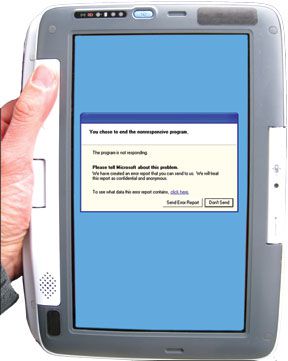 Blue Screen of Death in the Cockpit

Maybe I emit some kind of weird electromagnetic field, but it seems if theres a way to get a computer to crash, Ill find it. Back in my dot.com, tech-writer days people loved to have me beta test software because Id break it within five minutes. Ive even

This knack held right into our EFB trials that youll see on page four. We had started up the engine and I was having trouble getting the device to respond correctly. Simple solution: reboot. Not a big deal as it boots up pretty fast-except that it wouldnt shut down. It sat there running … and running … still running. Finally, the taskbar disappeared and the shutdown process commenced. Then the reason for the long delay became crystal clear: “Do not shut off your computer. Windows is installing updates.”

Installing updates? Were taxiing to the runway for freakin takeoff and the test device is installing updates? No one had turned off the automatic updates for this tablet computer and it found some when it updated its navigation data back at the office. There was nothing to do but wait. Good thing we werent depending on it for a taxi diagram or local frequencies.

This kind of thing is sadly common when testing cockpit devices based on off-the-shelf consumer electronics. The stuff works almost all the time. I had a 76 Rabbit that worked almost all the time, too, and I get the same feeling about using one of these EFBs as my primary chart reader and map during an instrument approach that I used to get driving that Rabbit through South Boston at two a.m.

Its a tradeoff. These EFBs offer far more capability at a much lower cost than a Garmin 696. But Ive never worried about a purpose-built, aviation GPS crashing just when I needed it most. OK, I admit, they do fail and every electronic device needs a backup. But I bet if you polled 20 users of a Garmin or Honeywell portable GPS youd be lucky to find one who had seen the unit completely fail. Do the same with folks who use laptop software-and thats what these EFBs are-and youd be lucky to find one who had never seen a lockup requiring a restart.

Theres a second level of annoyance with these devices. Some functions are an almost fit because the hardware just wasnt quite designed for it. Most aviation portables have built-in GPS. These EFBs require Bluetooth connections to separate GPS units. Not a big deal, but its one more thing to charge, to carry, to fail to connect. The touch screens sometimes have trouble distinguishing between a tap and a drag, especially in turbulence. I happen to have a Garmin aera and Honeywell AV8OR in my office now, too. Neither of these devices has that problem with their touchscreens. But, then again, I cant check my email in the FBO with an aera or AV8OR either.

The simple fact is that Im willing to put up with a lot more futzing and instability in the comfort of my office chair than I am while wrapped in aluminum and moving three miles a minute. For me, the value of these EFBs still falls short of overcoming the annoyance on any of the options available today.

A factor in that might be my flair for making computers crash. I prefer avoiding crashes of any kind when it comes to airplanes. –Jeff Van West