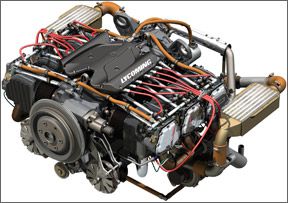 Ive been doing some reading on the rapid evolution of digital and electric drive technology in the automotive segment and was not too surprised to learn that the typical cars build budget now allows more for integrated circuits than it does for steel. This evolution is accelerating to the point that it may not be many years before the traditional cam and valve train is

replaced by digital actuators to manage the fuel/air charge. The implications for weight, performance and economy are obvious and significant.

Just as obvious is how much aviation engines lag in this regard. Theyre not just incrementally behind, but generationally behind. The reasons for this are several fold. I dont think legal liability or lack of imagination are the big drivers; the market is simply small and insular and wont support the investment required to push such projects through certification.

Against this backdrop comes Lycomings new IE2 project which can best be thought of as an incremental advance, not a great leap forward. In that sense, its appropriate to what buyers might reasonably be expected to want and pay for. Based on a detailed review of the project I did with engineers at Lycoming for a report that begins on page 5 of this issue, the design and execution of this system looks promising. Just as important, Lycoming isnt overpromising it as a fix-all for producing high horsepower on low-octane fuel. What a refreshingly different kind of honesty that is.

So whats it good for then? Good question. Lycoming sees the market interest mainly in ease of use and workload reduction for the pilot, plus an incremental improvement in operating economy. It also has protective algorithms against overtemping and overboosting. Its a single-lever system with full authority control of boost and prop RPM, with automotive-style sequential common rail fuel injection and direct-fire coils for ignition, with variable timing. In principle, its not much different than TCMs long-established PowerLink, although the execution looks to be several beats more sophisticated by dint of technology thats nearly a decade advanced from Continentals pioneering FADEC.

I dont know if this will be enough to kick up sales for the IE2. My gut feel is that it will be a factor, but the larger one is timing. Avionics advances have so far outstripped engine electronics that even buyers are sensing a vast mismatch. A dumb magneto cant tell your EFIS much about engine health, but a sophisticated FADEC with its finger on temperatures, mass airflow, ignition and fueling certainly can. Think of the EFIS/FADEC interface as a really smart check engine light. Even so, the informational interface is just an incremental improvement over the most sophisticated engine monitors already available, but its an improvement nonetheless.

So at this point, it looks to me like Lycomings incremental approach has it about right. My prediction is that it will find some market traction in just the same way-incrementally. Ill be surprised if the IE2 engine isnt an option on at least two established OEM aircraft within two years. If it is, others will follow. Id be willing to put $10 on that bet. -Paul Bertorelli