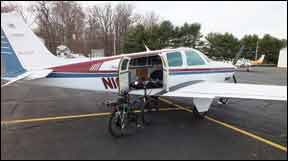 Following our July article on folding bikes, Woody Saland sent us the letter at right about his experience with electric bicycles for transportation at airport destinations. I asked him to send me a couple of photos and here they are. I wanted to show how he’s using this bike as an interesting juxtaposition to this month’s article on lithium-ion batteries. As he explains in his letter, this bike is a folder that’s also propelled by a small electric motor powered by a rechargeable lithium-ion battery pack.

What’s most interesting is not so much the bike itself but what it represents. Like the Prius he drives to the airport in, Saland’s Phantom bike is nothing less than a hybrid. It’s a pure parallel hybrid, meaning it can be powered by either electricity or­­—the primary means—by carbohydrate-fueled human muscle. Within the realm of electric bikes, there are two subcategories, power-on-demand or throttle-controlled designs and power-assist or so-called pedelecs that reduce human effort by providing electric assistance.

The market for such bicycles isn’t huge, but it’s growing for the simple reason that technology has taken a direction that buyers find practical. And that’s hybrid technology and it’s why there are 4 million Prius serial/parallel hybrids on the road, but only about 20,000 Chevy Volts and Nissan Leafs. Besides being expensive, plug-in electric cars simply aren’t competitive with internal combustion capabilities, green or not. But hybrids generally are because they recognize and compensate for the overarching weakness in electric vehicles: The batteries simply don’t have the capacity.

Can the hybrid idea apply to airplanes? After all, their development is even more stunted by battery limitations than are EVs. This is where Flight Design and Pipistrel want to go, the former with a parallel hybrid idea and the latter with a pure serial hybrid, like a diesel-electric locomotive. But what’s the supposed benefit? Noise reduction and improved economy. The argument is less convincing than it is for a Prius, which can cruise around town for a couple of hours on its batteries or run the Interstate at 70 MPH all day, using a fraction of the hybrid-powertrain’s total available power.

But airplanes don’t work that way. They require far more power to cruise and far more of the powerplant’s total available power. Plus, any hybrid needs to cart around some volume of batteries and getting the balance of battery weight against conventional liquid fuel while enjoying the benefits of hybrid drive seems like a tricky equation. I’m not a Luddite about this, but I’m skeptical that there’s a parallel between practical automotive (and bicycle) hybrids and airplanes.

Pure electric airplanes are making developmental inroads, but commercial volume isn’t in sight. When we last examined electric airplanes three years ago, we did so amidst the expectation of some that battery technology would improve at the same rate that computer processor power does. In other words, the notion that a Moore’s law for battery capacity existed and would double battery capability within a couple of years. That, of course hasn’t happened because there is no Moore’s law for battery capacity. One company has recently announced crossing the 400 wH/kg battery capacity barrier, but that won’t be enough to make something like an electric SR22 practical. What already is practical are small, light and aerodynamically slick airplanes that cruise closer to glider speeds than even modest piston-engine speeds. In other words, trainers and short-flight sportplanes. When will these appear on the market? My prediction is within five years. There will be enough early adopters to make these work on a limited basis. Or so I figure. We’ll see.