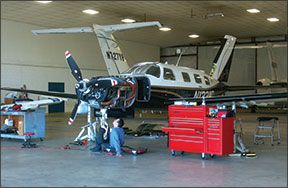 That’s one of the many things I learned over the 25 years working at several aircraft maintenance shops. As explained later in the issue, money matters can turn a healthy working relationship into a hostile separation. When this happens, the customer and the shop will lose. That’s why it’s the responsibility of the owner and the shop to keep this uncomfortable part of the work on the rails. With some rare exceptions, it’s also a reason why an owner shouldn’t take the aircraft without paying the invoice.

Both of these rules were broken when a friend recently brought his airplane to an avionics shop for autopilot work. There was a long history of favorable dealings on both ends of the counter. In other words, both the shop and the owner were assets to one another. But that unraveled when the shop’s owner asked for payment. Insulted by his arrogant tone—and feeling like a deadbeat—my friend assured the shop’s owner that he would put a check in the mail when he got home, as he’s done countless times in the past. These payment terms were acceptable for previous work, so why was this time any different?

On the way home (he didn’t pay the bill before leaving) my friend discovered the autopilot wasn’t fixed. Not only was he insulted by the way payment terms were handled, but now he’s angry at the unresolved autopilot problem. Back at the shop, the shop’s owner is angry for not getting paid and has little motivation to work with the customer again, except perhaps to collect on an old invoice. The autopilot problem was ultimately resolved, but my friend has vowed to never do business with the shop again. In a 30-second exchange over money, a 10-year relationship was foiled because payment terms weren’t clarified ahead of time. Who was in the wrong? You can make your own judgment, but there are lessons to be learned by this falling out.

The service department at my local car dealership stays in business because they don’t fork over the keys until the owner pays the bill. It’s an understood policy reinforced by a sign on the wall that states these terms. If this policy doesn’t exist on the wall of your aircraft shop, ask what the standard payment terms are—after you offer to pay the bill. Your willingness to pay could earn you better service in the future, instead of looking for a new shop.

Stepping Up
When I began evaluating avionics for Aviation Consumer somewhere around 1995, Garmin hadn’t conquered the world, Bendix/King was the king of the avionics world, Narco was a close second and a retrofit glass cockpit consisted of the stark Argus 5000 moving map display. I forget the price of aviation fuel, but you can bet it was more palatable than it is now. Back then, this magazine’s hard-hitting, give-it-to-them-straight reporting style was a perfect fit for my straightforward approach to helping consumers make the right buying decisions, while ignoring the marketing hype and ad propaganda found in other venues. Month after month, year after year, I remained committed to this cause.

As I take command of Aviation Consumer as editor, I’m more driven and focused than ever. There’s a lot to cover, to include the evolving aircraft refurbishment market, plus advances in avionics, engines and alternative fuel, to name just a few topics.

Rick Durden, my valued colleague, will remain aboard as Senior Editor, while also covering industry news and features for sister publication AVweb.com. I’m also joined by a variety of expert contributors; some have written in these pages for even longer than I have.

I know you’ll find value and education in our coverage and invite you to share in my enthusiasm for making you the most savvy and informed aviation consumer possible. — Larry Anglisano