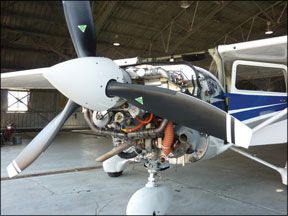 Are We At the 100LL Tipping Point?

It sure seems like it to me. Just in the past couple of months, I m seeing a scramble of activity, including major initiatives from both Continental and Lycoming, a new engine idea from South Africa, a new model from Cirrus pitched to burn low-

octane fuel and a rising fish-or-cut-bait sense from aircraft owners and pilots. At Continental, Johnny Doo, the new VP for engineering, told the visiting press last month that the EPAs initiatives to remove lead from aviation gasoline may seem like a long way off-2015 to 2017-but as the fuel research effort continues to drift, time is shorter than anyone thinks. The manufacturers are trying to rapidly line up their options to deal with a future fuel situation that they simply cant predict.

Every time I visit Continental or Lycoming-and I did both last month-Im struck by one thing: These are tiny businesses. Theyre not Mom and Pop groceries, to be sure, but theyre hardly Intel or Ford or even Sam Adams brewery, whose annual revenues outstrip Continental threefold. So despite being part of larger conglomerates, they arent swimming in capital, which explains why major developmental projects are rare and why they tend to telescope over long periods, running on a cheaper low boil rather than the high-budget speed of heat.

I am not encouraged. Increasingly, I think the future fuel challenge defies solution not for technical reasons, but for political and internecine, interorganizational squabbling. Its almost as if the quest has become an end in itself and the solution has become untouchable because it will leave a big vacuum with nothing to do.

Against this backdrop, both Lycoming and Continental are moving forward with (relatively) big dollar developmental work-Lycoming with its IE2 engine and Continental with a diesel project-intended to ready them for whatever fuel emerges as The One. Although the timing for both looks good, they are risky projects because no one knows if customers will resonate with these ideas. And therein lies the core of the problem. Pilots love to bash “Lycosaurus” for their lack of innovation but the record suggests otherwise.

More than 20 years ago, Lycoming flirted with John Deere to develop a heavy fuel rotary and it did again with Detroit Diesel more recently. Both projects were dropped. Continental is no stranger to technological risk. Remember the Voyager engine? If you think the Voyager wasnt innovative, consider this: It was watercooled, had high turbulence combustion chambers and a compression ratio of 11.4 to 1. In the 300-cubic-inch version, it demonstrated a BSFC of .345, which is better than the diesel technology Continental has acquired from SMA.

There are other cratered engine projects, not the least of which is the Thielert diesel. A good idea badly managed, maybe, but it basically tanked anyway. Lets not forget Rotaxs aborted project on V-6 engines that werent lighter than the existing competition, didnt produce more power and were complex. Other than the fact that nobody wanted these engines, they were smash hits.

Mature aircraft engines are in the sweet spot of cost, efficiency and power density. Its unfair and inaccurate to say neither Continental nor Lycoming havent tried to better these designs. They have. You could argue that the companies havent done the right kind of innovation, but if thats true, wheres the competition that has? (See above, Rotax, Thielert. See the report on page 4…)

Customers-mainly end users, but also OEMs-have decried the lack of innovative products. Yet when the engine makers have pitched new stuff, the very same customers have demurred, preferring to stick with the proven, the familiar, the reliable. Whether were in for a sea change due to threatened fuel supplies is unknown at this point. But it sure looks real to me. -Paul Bertorelli