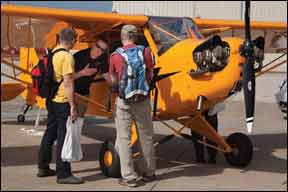 When the nuns were futilely trying to educate me at Saint Johns Academy for the Perpetually Misguided, the monthly report card had a blank section for comments. These were meant to be well-intentioned encouragement for depressed parents who, upon seeing columns of Ds and Fs, understandably veered toward alcoholism, if not suicide. For my monthly dispatches of despair, Sister Salisha may as well

have had a rubber stamp since she wrote the same thing: Pauls grades continue to fall short of his potential. (If you came of age during the 1960s, your report card said the same thing, unless you were one of those curve-busting nerds who ruined the academic careers of those of us who were too busy teaching ourselves to smoke behind the rectory to actually study.)

I think I feel the same way about the budding light sport industry. Theres so much potential there but it is, thus far, unrealized. When we set off to cover the U.S. Sport Aviation Expo in Sebring in January, the one word that came to mind was stasis. Theres just not much progress in this market and 2010, the hoped-to-be turnaround year, was actually worse than the dismal 2009. How can this be? Whats wrong here? What is the industry doing wrong?

Im not sure I can put my finger on it, but part of the problem is that there continues to be too many aircraft options for too few buyers. My theory is that this alone clips off some percentage of sales because would-be owners look at the field and find it too chaotic and fractured to make much sense of, so they do what buyers always do: They dither. I get a trickle of e-mail about this, asking me what I think of this design or that company. My guess is that these buyers are on the verge of writing the check, but decide to wait a while to see whats going to happen. (I believe the money is out there; the confidence is not.)

I doubt if there is a one-size-fits-all solution to this dilemma. Before it breaks loose, the economy will have to not just resume growth-it has already done that-but create employment, too. Its not that potential aircraft buyers are unemployed, but stories about persistent high unemployment erode the confidence some buyers need to feel comfortable spending north of $100,000 for an LSA, or any other airplane, for that matter. It may be awhile before we see that, so the smart LSA companies are simply going to have to hold on until market conditions improve and until there are maybe half as many manufacturers as there are now. Personally, if Im buying an LSA, I want the company selling it to be placing at least two or three a month into the market, or to have some other business mix that appears to make them viable. Only a handful of companies meet this acid test. Some of them are well-established with either allied kit businesses, or a diverse enough product line to constitute a real business plan.

I think the best potential exists in the training market. Last year, Tecnams Phil Solomon told me that critical mass may occur when there are enough LSAs out there to populate dying airports with a real training fleet. His view-and I think hes right-is that theres no long-term potential for the industry if new customers show up only to be squired to a 30-year-old Cessna 150 with shabby plastic and faded paint. Starting students simply arent going to be impressed by that. Im certainly not and I grew up with it.

I dont think the perceived high prices of LSAs are an issue and, in any case, its a pipe dream to believe the manufacturers are going to reduce them. At Sebring, I saw some sub-$70,000 airframes and those companies have fewer orders than those selling models costing twice as much.

Conclusion: It will be a slow, long haul to LSA market growth. When it reaches 1200 to 1500 units a year in the U.S., call that boom times. -Paul Bertorelli