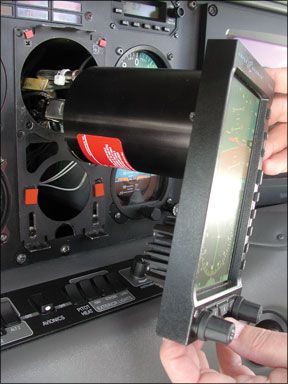 This months coverage on the Electronics International MVP-50 reveals an inflection point in glass upgrades for older airplanes. This is it: Even three years ago, if you really wanted to deck out a legacy airframe in full glass, you couldnt quite get there. You still had to fool around with analog or steam gauges for the

power and system instruments or, if you didnt, the digital replacement choices were limited.

They arent now. Between JPI, EI and Flightline Systems, there are plenty of options for replacing analog gauges with electronics. And the new stuff isnt just a pretty face on the old gauges. These devices do more, they provide more accurate information and they are, in short, just better.

The MVP-50 I reviewed for this issue was installed in a Cessna 210 that was getting a Garmin G600 and an S-TEC autopilot. These products are a great leap forward for a 35-year-old airplane and substantially improve on the experience of IFR flight.

Theres easily room for the ADS-B requirement when that comes due in 10 years. But in the decade ahead, new products will emerge to address that requirement, so theres not much point in worrying about it now.

So what is worth worrying about? The long-term value of the investment that a full glass conversion represents in a legacy airplane like a 210 or Saratoga. Im worried that some owners are stillasleep on the fuel issue and are too willing to believe the dont-worry-be-happyboilerplate coming out of the alphabets, who still arent confronting this issue realistically and addressing their members as adults capable of making their own risk assessments. In other words, in judging how the value of your airplane may be impacted, you are best advised to rely on your own information gathering from multiple sources, not just AOPA, EAA and others.

Recently, AOPA launched an informational campaign to both inform its members about the avgas issue and, apparently, tamp down what it sees as potential panic. Its good that the association is waking up and getting busy and noting to its members that it actually has been engaged all along, albeit not overtly.

But its coverage lacks inside baseball interpretation. When the going gets complicated or political, AOPA tends toward the banal: Dont worry, this is complicated, but weve got it. OK, so thats their job. But its not mine. What the alphabets dont accept is that even though the avgas termination date may be seven years off, owners will start to get nervous long before that if they dont have a replacement fuel in sight. This will directly impact two things: the value of an expensively modified airplane that requires 100-octane and the ability to sell it if the market gets volatile.

What to do? By all means read everything AOPA is doing on fuel coverage. Its good basic information and I give them credit for at least trying to get the tone right. Second, hook up with the 100 Octane Coalition (http://www.100octaneformyplane.com/). This group is doing what the alphabets are not: taking an active, market position to represent demand for a specific performance fuel-a 100-octane equivalent. Theyve become a good source for real-world assessment of the evolving fuel worry.

And by the way, Ive been repeatedly asked if Id spend money on these expensive upgrades or an engine overhaul considering the fuel overhang. My answer is yes, I would. But Ive got my eye on that timeline. You should, too.