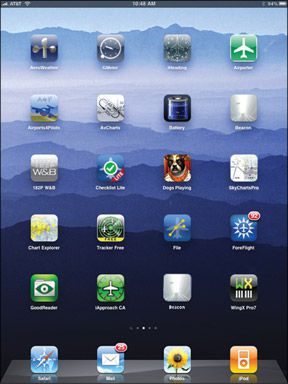 Owners of older Garmin GPS devices who live near our nations capital got a bit of a surprise recently: The ADIZ boundaries disappeared from their moving maps. While thats not exactly an aerial emergency (the D.C. ADIZ doesnt move around) it would come as a bit of a shock to someone who just launched on a VFR flight

expecting to use the map to stay out of the F-16 zone.

Whats more disturbing, though, is the “why” behind the disappearance. It seems the FAA, and subsequently Jeppesen, changed the way the ADIZ was coded in their master database. Many popular portables and all non-WAAS Garmin GNS 400/500-series navigators dont understand the new coding. Of course, a WAAS upgrade will fix the problem. (Will that be check or charge card?) The situation conjures an eerie feeling that our cockpit avionics are moving the way of our personal computers. You dont have to upgrade your hardware or software every couple years, unless you want to remain compatible with the rest of the world. Call it a forced choice.

Be it hardware or software, this stuff isnt cheap. We get regular complaints about the monopoly on data held by either Jeppesen or Garmin for this or that cockpit device. Its usually a shock to owners upgrading to a glass cockpit that they must add a fat column to the cost spreadsheet titled “subscriptions.”

Into this fray we now have a handful of tiny companies all vying for a fraction of that subscription budget by offering cockpit information on an open platform: the iPad. We have to hand it to these folks. Given their resources-these are one- to three-person companies-they are off to a great start. The biggest hurdles are that the iPad was never meant to be a cockpit GPS with moving map, and that they dont have a fraction of the R&D money that a multinational company has in making a cockpit device. These folks are dedicated and highly responsive to their customers, however, and sell their data and updates at the lowest price they can afford. They have to be all that because its so easy to shop around.

At Oshkosh this summer, Seattle Avionics made an announcement that tossed some more fuel on this fire. They supply data for Aspen PFD/MFDs, Bendix-King portables and several of the iPad companies. Seattle Avionics bundled the data subscriptions so that if you have it for the Aspen, its half-price for the portable. Buy the data for one iPad aviation app that uses their data and you just bought it for all the apps that use their data.

I dream that this is the beginning of open-source data for the cockpit, a concept thats only about 10 years overdue. Now couple this with the (finally) widening availability of free FIS-B weather. How long before theres an add-in for the Aspen system that puts the free weather on the MFD? I dont know, but Ill wager its already in the works. I know people are working on this for the iPad. Unless Garmin has some contractual restriction with XM, Ill bet theyre working on a GPS with a built-in FIS-B receiver. (And if there is contractual barrier, theyre scheming to get out of it.)

Theres no hope this will work backwards to that 430 in your panel. Existing sole-source monopolies on data arent going away. But backlash on subscription costs is growing and big companies are taking notice. Small vendors wielding iPads are not only offering some relief, they might be modeling a new way of making this system work.

At least, we can dream thats what might happen. –Jeff Van West